Jackie Mercandetti Photo
Grilled oysters from Chula Seafood Uptown are finished with bourbon-chipotle butter.
With December sliding away, a great year of eating is closing. This year, I was lucky to eat hundreds of meals (for work!) in the urban and rural reaches of the state, including at an Oak Flats campground, down on the Gila River Indian Reservation, and all over the Valley from El Mirage to Queen Creek. Out of the many plates I had, here are the 10 that still, as of today, haunt me the most.

Chula Seafood Uptown
100 East Camelback Road, #172
Oysters have an alchemy unique in the world of eating. Cooked, that alchemy narrows. Even so, the delicate marine notes of cooked oysters slide into harmony in Chula Seafood Uptown’s version, grilled and placed over char-ticked Noble bread rounds. That bread is crisp. The cooked oysters still jiggle. The meaty-but-delicate bivalves get finished with a bourbon-chipotle butter carrying a milk-rich comfort and warming heat. It’s hard to feel anything but sunshine slurping Kyle Kent's oysters. It’s hard to imagine cooked oysters getting much better. Shamy Market & Bakery
1110 West Southern Avenue, #8, Mesa
This hidden Mesa bakery, operated by the Alimams, a family of Syrian refugees, peals bready wonders from a gas oven from the back of a strip-mall room that is mostly market. They are pita and Middle Eastern pizza, and if you order right, they will include manakeesh: folder-thick, yeast-risen flatbreads with puffy rims. At Shamy Market & Bakery, you can order them round and flat, almost like pizza, or shaped in toasty canoes. Za’atar is finely rained on top. Haloumi is milky and saline. It's one of the Valley’s great unsung breads. 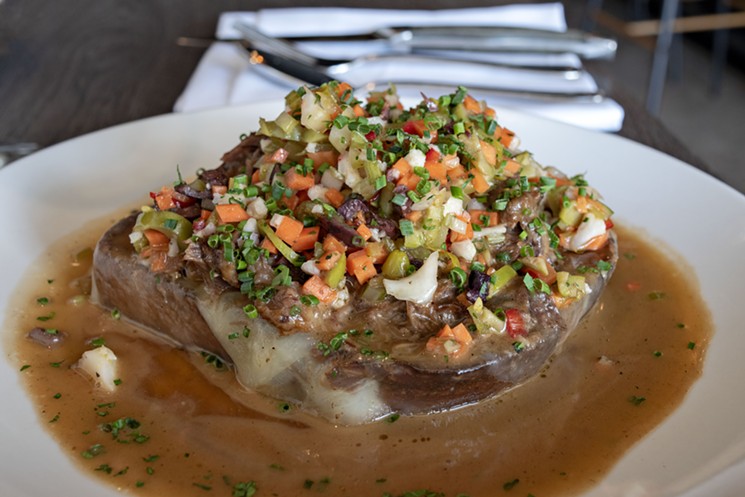 14202 North Scottsdale Road, Scottsdale
Dom Ruggiero’s riff on the Chicago-style Italian beef sandwich at Hush Public House is so mind-blowing that it might vaporize your memory of the original. His spotlights oxtail braised in red wine until the melting texture of a great barbecued brisket. On the plate, it rises from a shallow pool of gravy, covering a slab of Noble brioche and itself covered by a florid blizzard of giardiniera. Smoked provolone oozes. Parsley flecks the jus. The flavor is so deep and rich and artfully balanced that it would be a first-ballot entrant if there were an oxtail dish hall of fame. Vecina
3433 North 56th Street
The dense, light-green sauce that powers James Fox and Eric Stone’s ceviche dish at Vecina is practically drinkable. They could serve it in a bowl as a soup. They could fill pools with this stuff and charge people large sums to swim. The sauce is based on Peru’s leche de tigre, a coconut-spiked sauce tailored to fresh raw fish. But they add thoughtful, out-of-the-box touches, like fish sauce and ginger, and these weave together imperceptibly but brilliantly. Bright with lime and pineapple, touched with jalapeno, sidekicked by snappy tostadas, this ceviche honors the first-rate Chula Seafood hiramasa heaped at center.

Seydi’s Pupuseria & Grill
2625 East Greenway Parkway
Seydi Flores griddles many kinds of pupusas at her Salvadorian restaurant in north Phoenix called Seydi’s Pupuseria & Grill. The best one I’ve had features loroco, an edible flower that imparts, to its lusciously melted cheese within its griddled corn-dough pocket, a delicate fragrance similar to that of artichoke. This pupusa is soft, but not too soft, and shows garish smears of char on abrasive exterior. Jalapeno lends heat. You can taste the corn in the dough. Flores sources loroco from a Los Angeles market, and those pupusas come straight from her heart.

Look at the color on this skin!
Chris Malloy

Hot Noodles Cold Sake (Pop-Up)
10600 East Crescent Moon Drive, Scottsdale
For one day in March, Brian Webb, until recently a fixture at Hot Noodles Cold Sake, doled out lechon baboy. For this Filipino specialty, which he learned to make from his wife’s family, where there is a line of lechon baboy specialists going back a few generations, he cooked a whole suckling pig on a spit over charcoal. The pork was deeply flavorful, in the way that meat from a lovingly whole-cooked animal can be. The pig was perfumed with lemongrass and garlic, and rich with skin, your first bite tearing open a rare portal to Lapu-Lapu City.

La Bamba Mexican Grill Restaurant
12102 West Thunderbird Road, El Mirage
It takes a lot to be floored by tacos in a taco town. But that’s just what happened to me when I inhaled my first al pastor tacos from this nook in the far west Valley. Edson Garcia crafts my favorite version of al pastor in town at La Bamba Mexican Grill Restaurant. Using a pineapple vinegar, he ferments from the fruit’s curves and wedges, using fatty pork belly. Amber strips of pineapple ornament each taco. So do lashings of three different salsas. Limes and grilled onion pile on the tray beside the tortillas. Putting your hands to a newly griddled taco, nirvana feels close.

Old Town Taste
1845 East Broadway Road, Tempe
This strip mall Chinese restaurant has a Sichuan bent, and many of its best dishes dazzle with the high-flying interplay of Sichuan peppercorn and chile burn. The best dish at Old Town Taste that leans in this direction is the Chongqing-style platter listed on the menu as a house special. It comes in chicken or fish form. I prefer the fish, a small mountain of breaded whitefish alive with blistered string beans and char-splotched chiles. The sheath around each bite of chicken is thin and lacy. The fish is piping hot. There's a blast of salt and surge of pleasant numbness and fire, washing you away to happy places.

Kai Restaurant
5594 Wild Horse Pass Boulevard
After Kai broke for summer, Chef Ryan Swanson came back swinging. Within a few weeks, he developed and dropped a dessert for the ages: a key lime pie riff that spotlights what is arguably the signature plant of the desert: cactus. For the light green bulk and citrusy heartbeat of the “key lime” pie, Swanson calls on nopales. The fragrant, deeply earthy crust is built from Ramona Farms pinole. The pie also sees barrel cactus seeds, cholla buds, prickly pear in two unlikely forms, wild sumac, and desert willow. And here is a pie that you can’t taste anywhere else in the world: one that, in vegetal notes, restrained sweetness, and bright cutting beauty, calls to mind the Sonoran.

ShinBay
3720 North Scottsdale Road, #201, Scottsdale
ShinBay’s mixed seafood plate is a seven-headed sea monster. It’s really many plates in one, a smattering of separate, colorful marine preparations gathered onto one dish that evokes, as you go, a more deeply piercing wonder. A cream-cheese-thick lobster reduction changes your angle on shrimp. A meaty Kumamoto oyster gets zapped with ponzu jelly. Yuzu kosho brings a recently fished alabaster Hokkaido scallop to high life. Even strips of jellyfish faint with soy conjure a salt-wind feeling of blue sea. Chef Shinji Kurita is a master. At his new 13-seat omakase, this is his most masterful dish.