Melissa Horn
Here's where to tie one on while everyone else is unwrapping gifts.
Think everything’s closed down on Christmas Eve or Christmas Day since it’s, you know, a holiday? Think again, bub. Many local bars, taverns, and drinkeries will be open for business and serving those who are eager to tie one while most other places of business are dark.

It won’t just be thirsty patrons visiting these establishments in search of spirits, as some folks might be seeking some holiday cheer or human interaction to stave off the loneliness or boredom over the holidays.

And that’s one of the reasons why local watering holes are open on Christmas Eve and Christmas Day. Just ask Jeremiah Gratza, co-owner of Thunderbird Lounge, who feels that bars can be a welcome refuge during the holidays.

“It’s important for us personally to be open,” Gratza says. “There were many Christmases I would spend at my neighborhood bar in Peoria because all of my family was back home in Chicago, so we want to be there for anyone else with family back home and nowhere to go.”

So if you could use something stiff or some company to raise your spirits (or are looking for somewhere to go carousing with your weird relatives), check out our list of bars around metro Phoenix that will be open for business on Tuesday, December 24, or Wednesday, December 25. A few will even have live music, DJs, bar games, or other distractions.

Have a happy holiday, y’all, and be sure to get home safe.

You can enjoy a night of classic holiday movie trivia in Valley Bar’s Rose Room starting at 8 p.m. on Tuesday, while classic Christmas records are spun up by a local DJ. Admission is free.

Renowned harmonica player Billy Watson will jam with local blues ensemble Bill Tarsha and the Rocket 88s during the annual Christmas Eve Blues Spectacular on December 24. Doors open at 7 p.m. and the music starts at 8 p.m. Admission is $10.

Drag entertainment will be on tap during the "BS Intoxicating Christmas Eve" affair, which will be hosted by Celia Putty. Patrons can also hit the dance floor while DJ Anita Newhart provides the soundtrack or partake in such drink specials as $1 well cocktails and Corona from 9 to 10 p.m. and $5 Titos and Bacardi drinks the rest of the evening. The party starts at 9 p.m. Call 480-945-9028 for details.

This infamous honky-tonk will host its annual “Employee & Customer Christmas Eve Bash” on Tuesday night. They’ll have drinks, food, a pool tournament, an ugly sweater contest, and a karaoke session with DJ Trey LeTrash. The fun starts at 4 p.m. and goes until 11 p.m. Call 480-985-4088 for more details.

Spend the night before Christmas rolling through a few notable bars located in Tempe and attempting to drink each place dry. The crawl starts at Yucca Tap Room (29 West Southern Avenue) at 7 p.m. before heading over to Monkey Pants Bar (3223 South Mill Avenue) and other spots in the vicinity. Anyone and everyone can attend, according to the event page on Facebook. “Your mom is invited. Her weird friend is invited. Is your stepdad cool? Fine, he’s invited too.”

Dig out your funniest, ugliest, or most unusual pullover before heading to Aura in downtown Tempe for its Ugly Sweater Christmas Eve Party, which starts at 9 p.m. The event is open to anyone 18-and-over, but you have to be at least 21 to drink. There’s a $10 cover charge.

The annual Mazelpalooza party takes place on Tuesday night at Wasted Grain, with festivities happening both inside and outside. The upstairs Bubble Room will have DJ Gravity spinning from 10 p.m. to midnight, while the outdoor lounge will offer games like cornhole, giant Jenga, and giant Connect Four starting at 9 p.m. Meanwhile, the main room will host a performance by rock/pop cover band Smash from 10 p.m. to midnight.

The party starts at 9 p.m., and general admission is $45. A VIP cocktail reception will also take place from 9 to 10:30 p.m. in the Bubble Room and feature an open bar, private DJ, a menorah-lighting ceremony, and a Chinese “takeout” food station. It’s $500 to attend and includes one guest.

Be sure to don your kookiest holiday PJs and head for this west-side bar, which will host a Christmas Eve Pajama Party. It’ll have games, snacks, prizes, karaoke, drink specials, and more. It kicks off at 9 p.m. No cover.

Need to get away from the annual onslaught of familial drama for a few hours? The staff at Pomeroy’s will be willing to pour you a strong drink and listen to your woes on Christmas Eve and Christmas night. They'll have regular hours on Tuesday and will be open from 7 p.m. to 2 a.m. on Wednesday.

This funky Avondale dive, which features a basement bar built from an old bomb shelter, is planning a “Nice & Naughty Party” on Christmas Eve featuring karaoke, dance music spun by DJ Martin, drink specials, and more. The start time is 9 p.m., and there’s no cover charge. Call 623-932-9394 if you need more info. 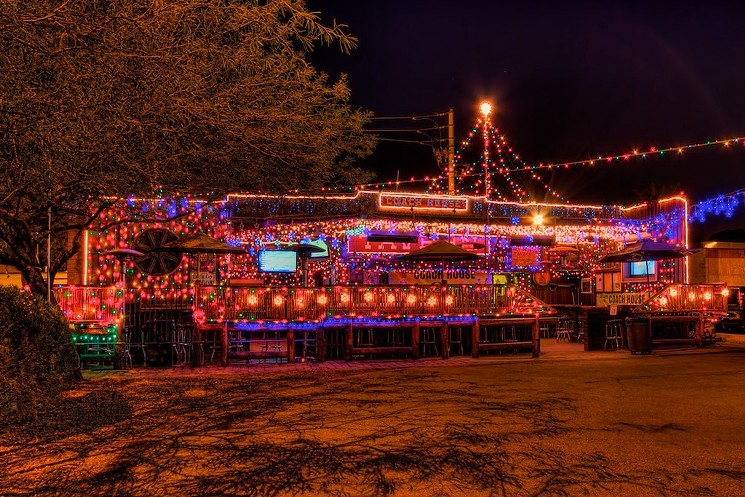 The Coach House in Scottsdale really gets into the holiday spirit.
CEBImagery/CC 2.0/Flicker Creative Commons

This rustic Scottsdale neighborhood bar prides itself on being open for business every night of the year without fail, even if it happens to be a national holiday. You can get an early start to boot, as the place opens up at 6 a.m. daily. Every inch of the place is covered in an astounding array of Christmas lights and decorations, which helps add to the festive atmosphere.

The Grand Avenue dive and tiki bar will be open regular hours from 6 a.m. to 2 a.m. on both Christmas Eve and Christmas itself. The place will offer its usual mix of cheap drinks, entertaining bartenders, and colorful regulars.

It’s absolutely, positively guaranteed that local gambling establishments will be open on any holiday. As such, Casino Arizona will have several of its bars serving drinks on Christmas Eve and Christmas Day.

The same goes for Wild Horse Pass Hotel & Casino, which will offer its array of gaming thrills and well-stocked bars to drinkers or anyone else who’s feeling lucky.

This off-kilter and island-themed joint in Scottsdale’s entertainment district will open at 6 a.m. on both holidays. Expect the usual amount of sass and debauchery from the staff.

All three Valley locations of this popular arcade/entertainment center chain will be whipping up cocktails and electronic action on Christmas Eve and Christmas Day. Each might have reduced hours, however, so be sure to call ahead.

This friendly neighborhood dive – which is beloved by bikers, rockers, and pretty much everyone else – will be pouring 'em strong and tall on Christmas Eve and Christmas night. Plus, the place is decked out with an unbelievable amount of holiday decorations, which will give you something to talk about with your fellow patrons.

“We're always open every day,” a bartender at this Scottsdale spot informed us when we asked about their holiday operating hours. That means you can swing through on Christmas Eve and Christmas night for a round or three, a few games of pool, or just to bond with your fellow drinkers. The joint also features an amazing jukebox, in case you’d like to hear some jams. Hours are 11:30 a.m. to 2 a.m.

It’s a tradition of many Valley drinkers and Swizzle Inn regulars to get a snootful at the uptown dive bar over the holidays, and the staff is more than happy to oblige them. They’ll be pouring drinks on Christmas Eve and Christmas night, but might have different operating hours than normal. Give the place a ring at 602-277-7775 before you head over. The Blue Hound at the Hotel Palomar will be open over the holidays.
Debby Wolvos

The cocktail bar and restaurant inside the Hotel Palomar will host a “Miracle Pop-up Bar" with a menu of seasonally-themed cocktails served in a festive setting filled with nostalgic and vintage Christmas decor. It will be open to the public both Christmas Eve and Christmas day. More info can be found here.

As its website states, this Roosevelt Row beer and wine bar is open 365 days a year, even on major holidays. Even better, they’ll have music from local ambient/acoustic/experimental band Third Seven at 9 p.m. on both Christmas Eve and Christmas night. Stop by starting at 5 p.m.

The posh LGBTQ bar located at Park Central Mall always has something fun going on during holidays, not to mention an array of potent cocktails. Pay a visit on Christmas Eve, and you can sing during a karaoke session that will run from 9 p.m. until last call. Or stop by on Wednesday night for Kobalt’s “Misfit Christmas” from 5 p.m. to 2 a.m. that will offer karaoke hosted by Fabulous Phil, cocktails, and holiday cheer. There’s no cover either night.

Of course the Dirty Verde will be open over the holidays. In fact, the infamous Tempe dive bar will probably be filled with all sorts of day-drinkers, rogues, hipsters, rockers, wastoids, and other characters. In other words, the PV's normal clientele. Hours are from 8 a.m. to 2 a.m. each day.

Even pirates need a drink during the holidays, and this dive favorite on Seventh Street will have libations aplenty for landlubbers and scallywags alike from 6 a.m. to 2 a.m. each day. If ye be hungry, Christmas Eve promises appetizers at 5 p.m. while a ham dinner with all the trimmings awaits you on Christmas Day starting at noon.

You’re more than welcome to stop by this hip spot in the Melrose District on Tuesday or Wednesday as it will be open from 4 p.m. to 2 a.m. both days. The staff will be playing vintage holiday VHS tapes (including Will Vinton's Claymation Christmas Celebration and the Teenage Mutant Ninja Turtles’ We Wish You a Turtle Christmas holiday special) and serving up hot toddies.

A favorite spot for all walks of life, the Yucca Tap will be serving drinks from 6 a.m. to 2 a.m. on both Christmas Eve and Christmas Day. The recently expanded Electric Bat Arcade and its tiki bar will also be open, in case you’d like to get your game on.

Christmas Day at this country bar will include a full food and drink menu, bull riding in the outdoor coral at 7:30 and 9 p.m., and live music from the Pat James Band and Pick O' the Litter Band during the evening. Doors open at 10 a.m., and there’s no cover.

You’re free to find a perch at The Little Woody over the holidays, as its proprietors say the kitschy drinkery will be open from 8 p.m. to 2 a.m. on Tuesday and Wednesday.

Local country-rock band Awake at Midnight will perform at the Chandler honky-tonk on Christmas night from 8 p.m. until midnight. Admission is free.