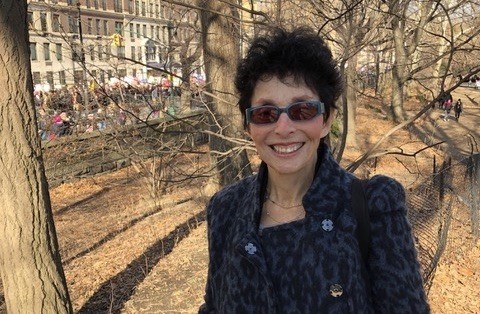 Abigail Gampel
Writer Laurie Stone gets personal in her new book.
The writer Laurie Stone went to a party on New Year’s Day. “Going there was about restoring a friendship,” she said on Sunday morning from her new home just outside Hudson, New York. “It was a renewal of a friendship that had fallen apart. I wanted to find out if there was anything still there between us. We couldn’t figure out how not to be wary of one another. But warmth rose up between us.”

Renewing failed friendships at parties is something that happens to Stone, both in her life and in her new book, Everything Is Personal, Notes on Now. In it, there are stories of her sister, who died in 2017, commentaries on the GOP health care bill, and the radicalism of the Bronte sisters. Warmth often rises up.

Several scenes in the book, which publishes next week, take place in Scottsdale. Stone and the man she lives with, Richard Toon, lived there part time until just last year. “During the years I spent long stretches in Arizona with Richard,” she writes in Personal. “I was lonely and looking for a cocktail party, even an ersatz one.”

Stone said she learned to like the look of the desert while she was here. “The mountains and the physical beauty I finally saw. I came to love desert vegetation. We lived right on a greenbelt. I was always looking for places I could walk.”

“She’s walking here,” writes n+1 editor Marco Roth in Everything is Personal’s afterword. Likening the narrative to a stroll with Stone through her life isn’t unfair. She leaps from cunning commentary on a film she’s seen, to describing what she’s eating while she types. She said she wasn’t trying to be clever or to re-create a form while writing this book. It began as a collection of Facebook posts.

“I am only interested in keeping the reader reading,” she said, then laughed. “My tactic is seduction. The ploy is how do I keep the reader thinking, ‘What is she going to say next?’ I have nothing to offer except excitement and a connection to my voice.”

“This book is me,” she offered. “It’s a bunch of stuff I did, and now that I’ve done it, it’s become a collage. I’m a collage artist. I don’t want the reader to have to stop and think about me or worry about me. I want them to find themselves in the story.”

A new book wasn’t supposed to happen, she said. “These two guys who have this bookstore in Greensboro, North Carolina, called Scuppernong Books saw my Facebook posts — commentaries and stories about myself and criticism. And they thought there was enough there to make a book.”


Stone agreed. In that book, she writes of how, the day after the last presidential election, she flew to Arizona and instructed Toon to buy booze. “Alcohol was really necessary in that period,” she said, then laughed again. “And that’s not how I live. I’m not a big drinker. But I needed some form of refuge from the sense of despair and confusion after the election, some buffer or cushion from all of it.”

The house in New York has provided another kind of refuge. She and Toon, a research professor, bought it last year with what Stone calls “our dead parent money.”


“It’s a great house, on a farm road, and so far, there have been no terrible surprises like, ‘Oh, no, there’s no heat!’”

Enjoying her new home has lately made Stone mindful of guiltiness. “It’s harder and harder not to feel guilty about things going your way,” she confessed. “I was saying to myself this morning that the guilt that’s stirred at a time like this has no purpose whatsoever. I remind myself, ‘Look at the sky, remember how happiness feels.’ It can be a struggle.”


It can also be material for her next monologue, which is how Stone thinks of her work. “Everything I write is a monologue. It could be social commentary or memoir, but I write life in monologue.”

She paused to call out a greeting to Toon, who has just returned to their new home on a farm road outside Hudson. “Really, if life were up to me,” she said, coming back to the phone, “I would just spend it making reckless decisions.”