Vera Kratochvil, public domain
Governor Doug Ducey publicly has called for health insurers to step up on mental health care, saying in January that companies should be covering mental health "just like they cover an annual physical."

But the governor has been silent on a bill that — according to some pharmacists — could allow insurance companies to deny coverage to patients who take medications for mental illnesses.

Despite not making any public comments, Ducey's office made a call to the Arizona Board of Pharmacy's director after the board came out against the bill. Pharmacy Board director Kamlesh Gandhi had just submitted a letter claiming the legislation put the interests of insurance companies over that of patients. One day after the call, Gandhi and the board flipped their position on the bill. 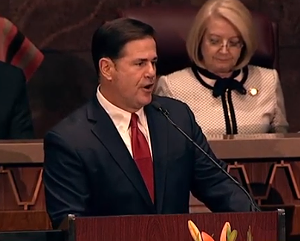 Ducey giving his state of the state address
ACTV
Supporters say the bill would make insurance companies another watchdog in the fight against the opioid epidemic. But opponents say doctors and pharmacists already can flag suspicious prescriptions and warn that insurance companies would likely use the private database to make business decisions at the expense of patients.

Among those opponents was the Arizona Board of Pharmacy, whose nine members are appointed by Governor Ducey.

The board submitted a letter to Senator Brophy McGee on February 11 questioning the motives of the insurance lobby. The letter, obtained by Phoenix New Times through a public records request, notes that insurance companies already can access patient prescription information through their claims departments. That makes the stated rationale for the bill suspect.

"Because the claims data are readily available, one can assume that the use of the CSPMP would be to evaluate the overall risk for that insurer. This could result in patients being placed in a different plan bracket, or even worse, being dropped altogether from that insurance plan," the letter stated. "The CSPMPS was created to provide information to patients, medical practitioners, and pharmacists to enhance health care decision-making. The Board does not believe that the CSPMP was intended to be used to determine insurer risk or for coverage determination."

Just five hours after Pharmacy Board Director Kamlesh Gandhi sent the letter to Brophy McGee, he received a call from Christina Corieri, a health care policy adviser for Ducey, according to a phone log obtained by New Times. And a few hours after the call, emails show that Gandhi attended a stakeholder meeting whose invitees included Brophy McGee, Corieri, and insurance lobbyists.

Corieri told New Times that she called Gandhi to offer him "friendly advice" on how to best address concerns the board had with legislation. She said she advised Gandhi to first have a dialogue with the sponsor of a bill rather than simply submitting a letter stating the board's position.

"You learn something from hearing the other person's thoughts and you might find a solution that is workable for both people," Corieri told New Times.

Corieri recently left her position in the governor's office to serve as interim director of the Department of Insurance and Financial Institutions after its former director, Keith Schraad, resigned on February 12.

Asked whether the governor supports SB 1370, Ducey spokesperson Patrick Ptak repeated an earlier statement to New Times that he does not take positions on pending legislation unless it is a "priority" for his office.

The day after the call with Corieri, Gandhi appeared before the Senate Health and Human Services Committee and announced that the board would reverse its position on SB 1370. Speaking to committee chair Brophy McGee, Gandhi chalked up the board's initial opposition to the bill as a "misunderstanding."

Gandhi acknowledged he spoke with Corieri about the opposition letter and talked to her about "a productive way to address those concerns." He added that he went to the committee hearing "to discuss and observe." 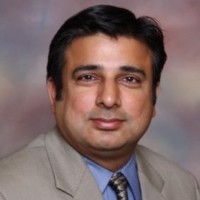 Hours after the Senate committee hearing, the board voted 4 to 3 during a telephonic conference to officially reverse its position on SB 1370. Several board members said they were reassured about the bill after Gandhi pointed to a provision in it that prohibits insurers from using the CSPMP data for "any purpose other than preventing overuse or abuse of controlled substances."

But other board members said during the meeting they still had the same concerns as before.

"I just don't see why insurance companies need to have access to this for any reason," said Mohammad Salari, a registered pharmacist and board member. "The only thing that can come out of this is bad outcomes for the public."

Salari's concerns reflect those of the National Association of Boards of Pharmacy (NABP), which is a member organization of state boards of pharmacy.

NABP Director Carmen Catizone has told New Times that his organization is "extremely concerned" with any legislation that could give insurers access to confidential prescription databases, stating that health care providers "are more qualified to provide the necessary care and interventions" with regard to drug abuse.

Catizone said the bill, if passed, could lead to Arizona losing access to a national network of prescription databases.

SB 1370 passed through the Senate Health Committee unanimously on February 12. The bill has not yet reached the Senate floor, where it requires a majority vote, followed by a majority vote in the House of Representative, before it would land on Ducey's desk for a signature.