Benjamin Leatherman
There's plenty to eat at the festival.
Knights in armor and ladies in cinched corsets currently can raise a glass at the Arizona Renaissance Festival. Children masquerading as princes and princesses can cheer on champions atop their steeds at Medieval Times in Scottsdale. These costumes and games may be inspired by the 16th century and Middle Ages, but how does the food at these period-focused places stack up?

Let’s start with the festival in Gold Canyon.

“Enjoy thy trip back to the 16th Century!” boasts the festival’s website. The information page promises to transport visitors to a medieval amusement park with several attractions, from an arts and crafts market to a jousting tournament. And yes, festival visitors can see lords and jesters digging into juicy barbecue pork shanks inside the Queen’s Kitchen or slurping up gluten-free clam chowder at the Joust Kitchen. “Everything here is off,” food historian Ken Albala says.
Benjamin Leatherman
Albala is a history professor at the University of the Pacific in Stockton, California. He wrote several books including Eating Right in the Renaissance and Food in Early Modern Europe. His idea of a good time? Firing up the grill and re-creating culinary specialties from a cookbook by the 1500-born Italian Renaissance chef Bartolomeo Scappi.

“Everything here is off,” Albala says as he reviews the food vendor list for the Arizona Renaissance Festival. “Turkeys begin to come in in the early 16th century. So I guess that's okay. But corn? Absolutely not. New England clam chowder? There is no New England then. Obviously. You know, this is just like carny fair food.”

During this time period, Albala says ordinary people would have drank beer — similar to ales — and they would be served warm, out of a cask. Royalty and wealthy families would also drink wine and sherry.

Albala listed pies, sausages, and roast pig as menu items that would be more accurate choices for any Renaissance fair.

“Why would you do something like barbecued pork shanks when you could just have roast pig?” Albala asks. “They also loved capons [castrated roosters]. And there’s vegetables. They’re usually prepared very simply, but in the early 17th century, artichokes became really, really popular and elegant. So artichokes, asparagus, things like that would be perfectly fine.”

“We are an amazingly unique event which is not historically accurate,” Malinovic says in an email. “It’s more like Monty Python type-entertainment with a village of interaction comedy, crafts, food, and fun.” Albala describes some of the showstopper pieces that would have graced the tables of royal families and the households who could afford to show off during dinner time.

“They were certainly into food and they liked grand presentation pieces,” Albala says. “You know my favorite is by Martino da Como. He has a peacock and he takes out its feathers. It’s cooked and then the feathers are re-sewn into the bird. When it’s brought out, there’s a piece of cotton soaked in camphor in its mouth. When it’s lit, the cooked peacock looks like it's shooting flames out of its mouth.”

The queen’s dinner at the Scottsdale castle is a four-course feast which includes corn, potatoes, tomato bisque, oven-roasted chicken, and dessert. 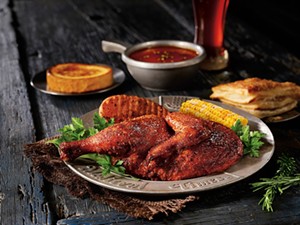 Medieval Times' old-tyme repast, which patrons eat with their hands.
Medieval Times Scottsdale
“Roast chicken, that would be okay,” Albala says. “Everything's wrong about that tomato, corn, and potatoes. You know what bothers me, honestly? They could have done it right. They could have had really good food and people would have learned something about what people ate in the Middle Ages.”

He says corn and potatoes were not discovered by Europeans until after Christopher Columbus. Even though botanists depict these in the 16th century, Albala says these vegetables were not consumed until long after the Renaissance was over.

According to Albala, anything from cows, pigs, and chickens would have been at home on a table during this time period.

“There are just really interesting recipes, like blancmange which is a white meat chicken, pounded with sugar, almond milk, and a little rosewater,” he says. “It’s a pudding made of chicken and I know that sounds dreadful. Inevitably, someone says, ‘Oh, yes. Tastes like chicken nuggets.’”

He would have also added crepes to the Scottsdale menu along with parma tarts: spicy, meaty pies stuffed with chopped pork, pine nuts, and currants.

“Part of why I do this stuff is so that people will actually cook the recipes from the past and discover new flavor combinations and new ways of cooking. This is just ... discovering the past,” Albala says. "There's a new place to visit, gastronomically.”

Editor’s note: This article was updated from its original version.