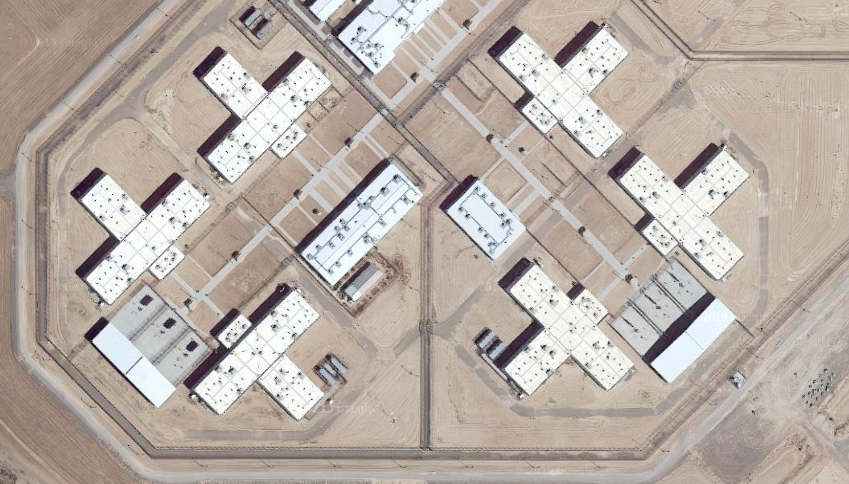 Google Maps
Satellite image of La Palma Correctional Center.
Eight Arizona asylum seekers with serious and chronic medical conditions are asking to be released from federal detention due to the heightened risk they face from the new coronavirus, according to a complaint filed in U.S. District Court on Wednesday.

The action comes the same day that U.S. Immigration and Customs Enforcement (ICE) confirmed the first positive case of COVID-19 in an Arizona ICE facility — a 45-year-old Guatemalan national being held at La Palma Correctional Center in Eloy.

Five of the detainees who are asking to be released are being held at La Palma. The other three are being held at the nearby Eloy Detention Center. All of them have medical conditions — including asthma, HIV, diabetes, and hypertension — that would put them at greater risk of harm or death should they contract the coronavirus.

"As a matter of policy, [ICE] does not comment on pending litigation," said ICE spokesperson Yasmeen Pitts O'Keefe.

The eight detainees, who are being held as part of civil immigration proceedings, are represented by attorneys from the American Civil Liberties Union, the Florence Project, and the law firm Perkins Coie.

On top of the eight detainees who filed the complaint, Florence Project attorney Laura Belous said her organization has requested parole for many more clients with underlying medical conditions. ICE has released "a couple" of detainees with HIV, Belous said.

In the complaint, attorneys for the eight detainees allege that conditions at the detention centers are ripe for rapid coronavirus spread, describing each jail as a "tinderbox of involuntary crowding and underpreparedness."

“Individuals in these facilities live, eat, and sleep in such close quarters that COVID-19 will spread like wildfire once it enters the detention centers, as it inevitably will in the absence of adequate infection prevention and control measures," said Dr. Jaime Meyer, an infectious disease specialist quoted in the complaint.

Detainees live in close quarters and sleep in bunks, sharing showers, telephones, toilets, and sinks. They generally eat "elbow-to-elbow," as one detainee described it in a declaration. And detainees told attorneys that few measures are being taken to limit group settings and encourage hygienic best practices. For example, one unit at the Eloy Detention Center has five showers for 100 detainees. Each detainee is provided one cup of shampoo for a week. If detainees want soap, they must purchase it at the commissary.

In addition to the crowded facilities, the complaint alleges inadequate medical care and monitoring. One detainee who reported a sore throat, fever, cough, and headache waited a week to see a doctor after initially reporting his symptoms, according to the complaint. Even after he was finally seen by a doctor, ICE did not remove the detainee from his shared cell, did not give him a mask, and allowed him to continue to use communal amenities.

The eight asylum-seekers include a Nicaraguan police officer who faced severe beatings over disagreements with her government, a Mexican man who experienced rape and kidnapping, and several LGBTQ individuals who face persecution in their home countries.

Despite social distancing recommendations, both facilities remain open to outside contamination, the complaint alleges. Detainees and their attorneys continue to attend hearings in immigration court, where they sit side by side on benches in hearing rooms that they share with court officers, government attorneys, court reporters, and interpreters. On top of the hearings, attorneys still meet with detainees at the detention centers to prepare them for hearings, gather signatures, and conduct other legal activities.

In the complaint, the attorneys allege that in-person visits continue because "there is no other effective,
consistently functional, and confidential manner to communicate with clients." Judy Flanagan, an Arizona immigration attorney who is not part of the complaint, recently told Phoenix New Times that she had a call with a client that "indicated that we were being recorded."

"All of those things you need to do to get your client ready for a hearing, it’s very awkward to do it by telephone for limited amounts of time," Flanagan added.

ICE requires attorneys to wear personal protective equipment like masks, gloves, and goggles when they visit detainees. But the agency does not require its own staff to do the same, the complaint alleges.

The legal action to release immigrant detainees in Arizona follow similar efforts across the country, some of which have been successful. Risks of the coronavirus have prompted federal judges to grant releases of detainees in New York, California, and Pennsylvania.