Lynn Trimble
Gabriel (left) and Isaac Fortoul at Phoenix Art Museum.
Gabriel and Isaac Fortoul are two of the most prominent artists in the Phoenix area. The Fortoul Brothers, as they’re known, have created works for Phoenix Art Museum, Artlink, and Valley Metro. They’ve partnered with Phoenix businesses and institutions. And they’ve had a significant impact on the look of several Phoenix neighborhoods, where their murals — recognizable for their strong, simple lines that often mix natural elements (water, plants, the sun) with the naked human form — can be found gracing large, public surfaces.

Lately, though, it is not their art that’s drawing attention. Rather, it’s allegations of sexual misconduct made against Isaac Fortoul. On May 29, Phoenix artist Merryn Alaka alleged in an Instagram story that Isaac Fortoul sexually harassed and groped her on December 31, 2018.

“Issac [sic] Fortoul told me that I don’t matter because I am just a black artist making working [sic] about (hair) and being black,” she wrote. (Alaka’s body of work includes installations exploring the cultural significance of hair.) Her post continued: “He said this to me after sexually harassing me and groping me without my consent and after consistent rejection.”

Then, a Phoenix woman named Brittany Lea came forward on Instagram and accused Isaac Fortoul of raping her in 2016, after she attended a party at a gallery where the Fortoul Brothers were showing their work. 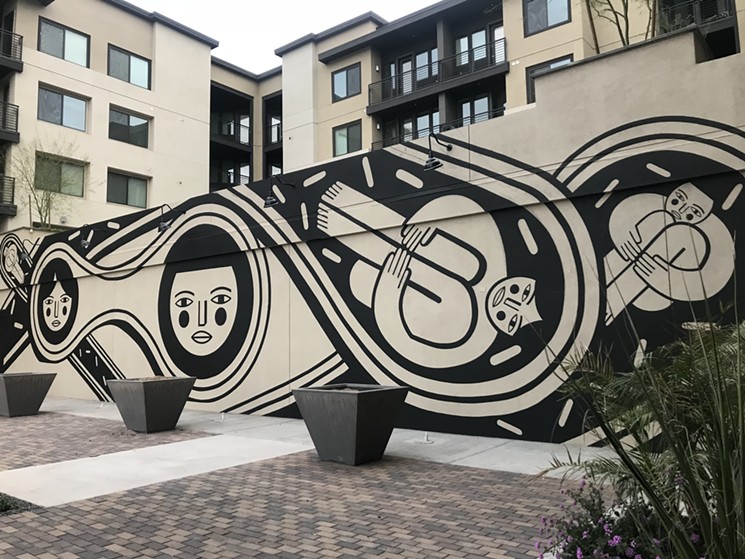 One of the Fortoul Brothers' murals in Roosevelt Row.
Lynn Trimble
Lea spoke with Phoenix New Times by phone on Sunday. She recalls that Isaac Fortoul was bartending at the party and kept “feeding her drinks.” She also says she felt uncomfortable after Isaac came up behind her while she was dancing. Lea doesn’t remember going home with him.

“I blacked out,” she says of the gap in her memory that night. She says she woke up inside the Fortoul Brothers’ home in the Garfield neighborhood, near an elementary school where the brothers have been painting a garden-themed mural for more than two years.

"I was unconscious and came to with his [Isaac’s] penis in my mouth," Lea says.

Lea says she called the police the next day and filed a report. "Nothing happened, that was it," she says of the police response. "I never had any way to prove what happened." (At the time of this writing, New Times has been unable to obtain a copy or confirm the police report.)

“I haven’t made an official police report,” she told New Times by phone on Saturday. “At the time, I didn’t know that was an option I had.”

Kimber Lanning, who hired Alaka to co-curate the Modified Arts gallery in Roosevelt Row, recalls Alaka telling her roughly a week after the incident that she had been groped and mistreated by Isaac Fortoul.

"I'm proud of her for finding her voice in this," Lanning tells New Times, referring to Alaka's decision to go public with the experience. Artist Merryn Alaka at Modified Arts in Roosevelt Row.
Lynn Trimble
Lea says she has been talking with additional victims about the possibility of taking further legal action. "I would absolutely love to pursue a trial against them," Lea adds. "Some of us are working on it."

In the meantime, Alaka has taken her cause online. On Saturday, she created a Change.org petition titled “Remove the Fortoul Brother Public Art in Phoenix.” The petition is addressed to Valley Metro, Artlink, Arizona Commission on the Arts, Phoenix City Council, and Heard Museum. As of 3:30 p.m. on June 1, it had amassed over 10,300 signatures.

Valley Metro has commissioned several Fortoul Brothers installations, including a bus wrap, a temporary mural in Roosevelt Row, and art for a future light rail station in south Phoenix. The city of Phoenix has commissioned the Fortoul Brothers to create work for Phoenix Sky Harbor International Airport, and budgeted over $1.1 million for a project planned for a water services facility in the west Valley.

New Times reached out to the Fortoul Brothers on Saturday to request a phone interview. Instead, they emailed a one-page statement, which begins: “We feel obligated to address a number of accusations that have been circulating on social media this last two days.” That statement also has been posted on the Fortoul Brothers’ Instagram page.

As the Fortoul Brothers acknowledge in their statement, Alaka is not the only woman to make allegations against Isaac Fortoul. Other women have posted accusations of sexual misconduct, including rape, on social media in recent days, without sharing basic details such as when and where these alleged crimes took place.

The Fortoul Brothers’ statement includes a paragraph addressing Alaka’s accusations, which appears to be written directly to Alaka. “The two of us shared moments that were obviously seen through two different perspectives,” Isaac Fortoul wrote.

He also states that “no one else was involved in our conversation on NYE, so no one else can make accusations as to what happened in that moment.”

Alaka told New Times that artist Ashley Macias was present during her encounter with Isaac Fortoul, and Macias confirmed to New Times on Sunday that she witnessed the incident. After Alaka went public with her experience, Macias posted a story about it on her Instagram account. She wrote: “I saw his actions. I heard his actions. I felt his actions.”

The brothers' statement sets the allegations against Isaac Fortoul in the context of current events, suggesting that detractors are making “false, unfounded, and serious accusations” because they are “obviously overwhelmed by the extreme events of the world.” Most of their accusers, according to the statement, are people they’ve never met. “These are total made up lies seeking to harm and destroy us under the guise of some activism, fueled by recent events.”

On Monday night, Isaac Fortoul responded to New Times' questions about specific allegations with the following statement, sent via text: “I am a Latino male and understand how difficult it is to make it in the world. I would never make comments that were racially degrading to any individual."

The text also references a portion of the brothers' Saturday statement, in which Isaac Fortoul indicated that he has talked with Alaka about the 2018 incident. “Again, as I expressed over a year ago, I apologize for the insensitive comments I made about her art.” His text concludes: “I have never sexually assaulted a woman in my life. These allegations are unfounded and hurtful.” 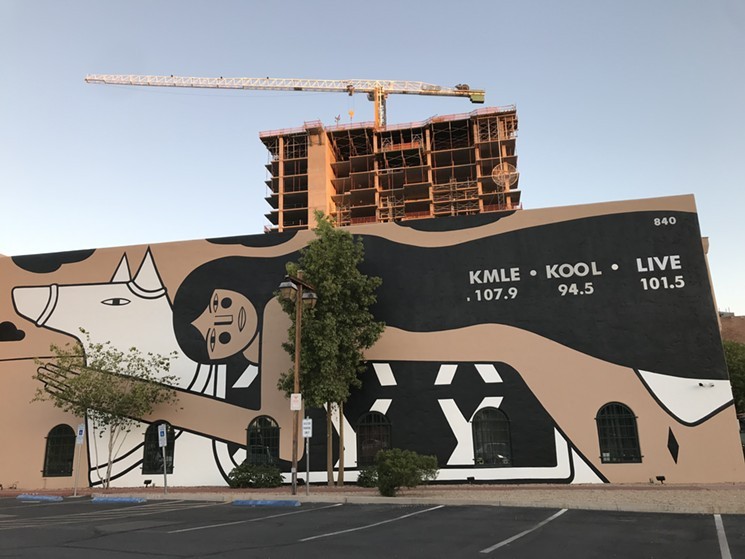 One of the Fortoul Brothers' murals in Roosevelt Row.
Lynn Trimble
Many community members are already taking the allegations against Isaac Fortoul seriously. Some have been motivated to act. A public Google Doc has been created; it lists over three dozen businesses and cultural groups that have worked with the Fortoul Brothers, and encourages people to alert them of the allegations and call for them to withdraw their support for the artists.

A representative for Tuft & Needle, which released a "Sweet Dreams" throw blanket featuring a Fortoul Brothers design last fall, sent New Times a statement via email on Monday that says the company was “unaware of any allegations” at the time they worked with the Fortoul Brothers.

“Our relationship with the artists is not ongoing,” the representative wrote. The company is offering full refunds to people who want to return the product “in light of recent accusations.”

Practical Art, a small business that carries works by Arizona artists, also has responded. “This whole situation has been shocking,” owner Lisa Olson told New Times by email on Monday. “I am heart broken to learn of this.” The shop has stopped carrying works by the Fortoul Brothers.

The Latino Architecture Student Organization at ASU also commented on the situation via an Instagram post, which reads, in part: "LASO would like to acknowledge the victims who have endured both physical and emotional abuse in relation to the Fortoul Brothers." According to that post, "Any and all associations will be ceased in response to the allegations."

The Fortoul Brothers mural on the north side of Roosevelt Street just west of Seventh Street recently was tagged with graffiti. Some text appears to reference the recent protests sparked by George Floyd’s death, and some seems to reference the allegations against Isaac Fortoul. Using black paint, the tagger wrote “rapist” on a male face that’s part of the mural’s design.

Malena Barnhart, whose body of work often explores misogyny in contemporary culture, is one of several artists showing support for Alaka. Barnhart told New Times by phone on Saturday that Alaka discussed the incident with her last year.

“It could easily hurt her more than them,” Barnhart says of Alaka’s decision to go public. “The Fortoul Brothers have a lot more power than her.”

A previous version of this story stated that Alaka intends to pursue legal action against Isaac Fortoul. After publication, Alaka told New Times she'd been misunderstood and does not plan to sue. New Times regrets the error.