Erasmus Baxter
In this screenshot from a flight tracker, a DEA helicopter can be seen circling protests in Scottsdale on Sunday.


As protesters gathered in Scottsdale on Sunday, they were monitored from above by a U.S. Drug Enforcement Administration helicopter.

This comes as the agency has received dramatically expanded authority to surveil and investigate protesters.

Officer Kevin Watts, a Scottsdale police spokesperson, said the department worked with state, local, and federal agencies over the previous week, including the DEA.

“Based on the footprint of the planned event, we felt that an overall aerial view was paramount in ensuring the safety of all participants,” Watts said in an email. “DEA's asset was available and we took advantage of it.”

He referred further questions to the DEA, which declined to comment.

Wes Parrell, a spokesperson for the Arizona National Guard, said the Guard also provided a helicopter to monitor protests in Phoenix over the weekend at the request of the multi-agency coordinating center (a combined command of local police and Guard units responding to the protests). It took on the same role as the Phoenix police and DEA helicopters.

Parrell said the Guard often will take a representative from the command center it's working with in the helicopter to report back updates via radio.

The DEA helicopter is registered to Silver Creek Aviation Services, a fake Texas company linked to the agency.

The DEA previously has refused to confirm its connection with the company, but Scottsdale police confirmed that the agency was the only one providing air support Sunday.

Sunday's march was scheduled to begin at 5 p.m. and wrapped up around 7 p.m. Flight records show the helicopter left Scottsdale Airport at 4:27 p.m. and returned at 7:37 p.m. after making countless tight ovals over Scottsdale.

Jerod MacDonald-Evoy, a reporter with the Arizona Mirror, noted on Twitter that the same helicopter was flying over Paradise Valley on June 5.


BuzzFeed News first reported last week on the DEA’s expanded authority that allows it to conduct covert surveillance and collect intelligence on protesters, and to arrest those alleged to have broken federal law. The expanded authority was approved May 31 and lasts two weeks.

Other federal agencies have also surveilled recent demonstrations, including U.S. Customs and Border Protection flying a Predator drone over Minneapolis.

In 2015, the FBI flew surveillance flights over Black Lives Matter protests in Baltimore.

An additional plane also appeared to be circling the Scottsdale protests Sunday. However, it didn’t list any registration info in the flight tracker and county and state law enforcement denied ownership of it. Shortly after the protest dispersed, it disappeared from the radar. 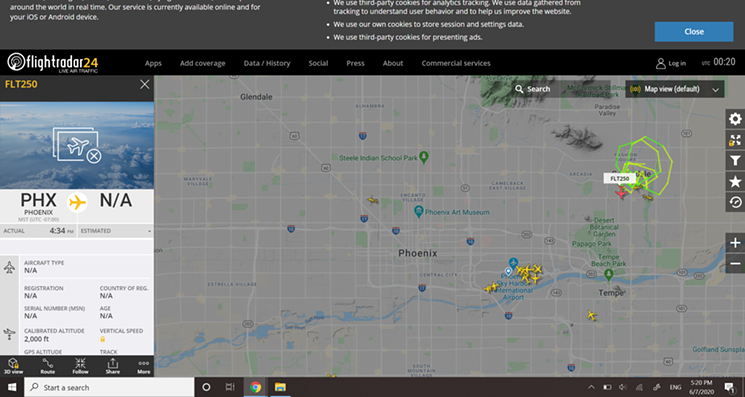 A mystery plane appears to have circled protests in Scottsdale on Sunday.
Erasmus Baxter