Ray Stern
Train cars still lay on the ground beneath the collapsed bridge on Thursday following the derailment and fire.
The environmental impact from this week's Union Pacific train derailment and fire in Tempe is being studied, with concern over a leaked chemical underscored on Friday after a minor spill of the substance sent a worker to the hospital.

A morning fire on July 29 destroyed several train cars and caused a section of a railroad bridge built in 1912 to collapse next to the Tempe Town Lake. No one was injured, but Union Pacific said about 500 gallons of the solvent cyclohexanone leaked out of one of the cars. The incident's cause remains under investigation.

On Friday afternoon, two Union Pacific contract workers were hurt while emptying some remaining cyclohexanone from a train car as part of the cleanup effort. When they disconnected a hose, several gallons poured out, splashing one man in the face, Tempe officials said. He was taken to a local burn unit with serious but non-life-threatening injuries. A second man was treated at the scene; he declined to go to the hospital. No more than 10 gallons splashed into a dirt area around the tank car, officials said.

Also on Friday, July 31, the Arizona Department of Environmental Quality approved a Union Pacific Railroad water and sediment sampling plan of affected areas to be carried out with the help of Tempe officials.

"ADEQ has requested expedited test results and expects to begin receiving data as early as next week," DEQ spokesperson Caroline Oppleman said in an email.

Cyclohexanone is a common, flammable liquid solvent used in the production of nylon, added to paint and thinner products, and sometimes used to make the illegal drug PCP. In 1974, a related chemical called cyclohexane, which is used to make cyclohexanone, caused an explosion that killed 28 people in Flixborough, England.

Smelling of acetone and peppermint, cyclohexanone is a known irritant of the skin and eyes. Ingesting it or breathing its vapors can cause potential harm to animals and humans, but it's not a carcinogen, and "information on toxicity to human beings is fragmentary," says a National Library of Medicine article about the substance that was updated on July 28. Studies on rats have revealed it has relatively low toxicity. 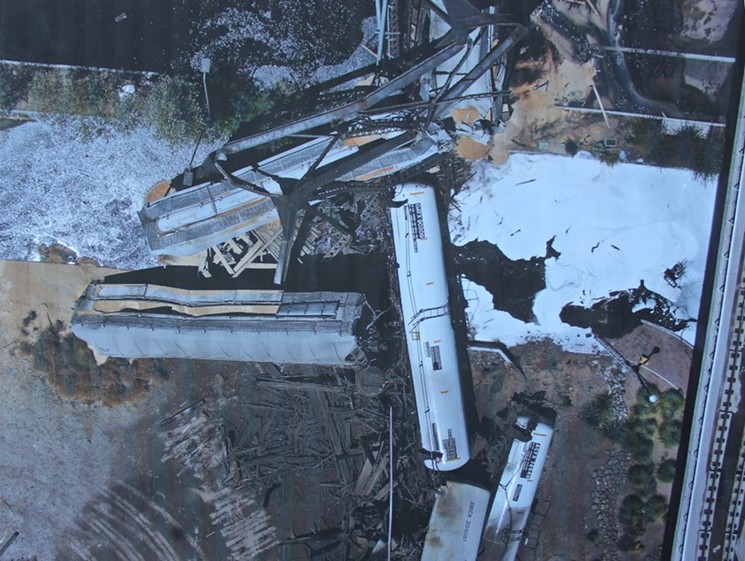 An aerial view of the fire site shows the white foam used to cover spilled cyclohexanone.
City of Tempe
As officials explained on the day of the fire, the leaked cyclohexanone didn't go into the Town Lake. Much of it stayed on the ground near the train cars that fell from the bridge, while an unknown amount poured into a storm drain that empties into a spillway in the mostly dry riverbed a quarter-mile or so west of the lake's western dam.

A haz-mat team later covered the cyclohexanone on the ground with foam to prevent an explosion, then scooped it out of the area. The liquid that escaped down the storm drain required a different approach. Union Pacific, which is responsible for the incident's impact as well as cleanup with DEQ's oversight, swiftly built a berm downstream of the dam, then flushed the storm drain "all the way through" before recovering and properly disposing of the chemical, Oppleman said.

The July 31 sampling "will inform whether residual material is present in the riverbed and whether additional actions or remediation are necessary," Oppleman said, adding that an environmental investigation is ongoing.

Amy Burnett of the Arizona Game and Fish Department said the riparian area around the lake contains a number of small animals including beavers, raccoons, ducks, herons, ospreys, bald eagles. She hasn't heard of any problems yet, but it's too early to know if the spill will cause negative effects, she said. From what she's heard, "there's no need to panic," she said. "The river heals. It's amazingly resilient."

Game and Fish advises the public to contact Phoenix wild-animal rescue centers Liberty Wildlife or Southwest Wildlife Conservation Center if they see an animal in distress.

Linda Searles, founder and executive director of Southwest Wildlife, said it's worrisome anytime chemicals spill into the environment, but "we'll have to wait and see" if problems arise. She hasn't heard of any animals hurt because of the train mishap, but if that happens, "we'll respond." (Both Liberty and Southwest wildlife centers prefer people to bring injured small animals to them, but to call first for larger animals that may cause injury to themselves or a person.)

Some of the debris from the fire and derailment did fall into the Town Lake on July 29. Andrea Glass, an assistant fire chief for Tempe, told New Times that, so far, officials believe that only ash and untreated wood fell into, or was swept into, the lake during the incident.

"We don't believe any hazardous material dropped into the lake," she said, adding that the city is also working with the federal Environmental Protection Agency on the cleanup.

Debris could be seen in the lake on the morning of the fire.
Ray Stern
The manmade lake, which opened in 1999, is home to several species of fish that lake visitors can try to fish for, and while the water has a vaguely unpleasant smell and taste, it's usually clean enough to swim in or even drink, (neither of which are advisable).

Hilairy Ellen Hartnett, a professor at Arizona State University's School of Earth & Space Exploration and School of Molecular Sciences, has been testing the Town Lake's water with colleagues and students for 15 years and will be watching how or if this incident affects the water quality.

Hartnett, like Burnett, noted that the "riverbed is not pristine" and was practically "abandoned" until the Town Lake was built.

"In the area there are Superfund sites," she said, referring to a federal designation for contaminated land. The lake "gets runoff from the street... It's a slightly gritty urban lake."

Hartnett thinks it's unlikely the fire and spill will cause any problems, though it depends on what was spilled and how much.

"It's going to be important to take samples and monitor what the lake chemistry looks like over the next few weeks and months," she said, adding that she's planning to take a water-quality sample over the weekend.

Union Pacific was expected to remove all the wrecked train cars within a couple of days, but the popular Tempe Beach Park and pedestrian path near the fire site will be closed for a while — officials can't yet say for how long. Other areas around the lake remain open. Rio Salado Parkway near Mill Avenue will also remain closed until further notice. Valley Metro light rail service stopped briefly after Friday's spill, but soon resumed.

A similar but much smaller derailment and fire occurred on June 26 in the same area, and a subsequent inspection on July 9 cleared the rail line.

Tempe Police Chief Sylvia Moir said at a news conference on July 30 that so far, no sign of criminal activity in relation to the incident has been discovered, and evidence is pointing to a possible structural failure on the rail line. The FBI is also investigating.

Lupe Valdez, Union Pacific senior director of public affairs, said at the same news conference that all the freight on the line would be rerouted to other Union Pacific lines or a competitor's line. She didn't know if any chemicals like cyclohexanone would require truck transport while the rail line across the destroyed bridge remains closed.

“We want to apologize to the community for the impacts,” Valdez said. “Our intention is to fix this bridge.”