Ex-Workers at Bikini Beans Coffee Say They Were Illegally Underpaid

Alexandra Gaspar
Bikini Beans coffee shops are feeling legal heat from some women who used to work there.
Bikini Beans Coffee, a local chain of coffee stands staffed by bikini-wearing baristas, is being sued in federal court by two former workers who allege that the company failed to properly pay employees.

The class-action lawsuit was filed on July 30 in the U.S. District Court of Arizona by Valerie Valle and Keely Siegel, on behalf of current and former Bikini Beans employees. The two women worked at Bikini Beans locations around metro Phoenix, Valle as a former manager, and Siegel as a former barista. They're being represented by Bendau & Bendau PLLC.

The 48-page lawsuit makes several allegations, including that the defendants, Benjamin and Regina Lyles, the owners of Bikini Beans Coffee, violated state and federal law by paying employees a "sub-minimum wage" and illegally withholding tips from employees as punishment when they arrived late to work. 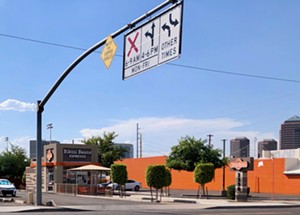 Bikini Beans Coffee on Seventh Street.
Lauren Cusimano
Employees were frequently required to work after clocking out, work from home while not clocked in, attend mandatory unpaid meetings, and attend unpaid house parties, the suit says, claiming the staff didn't receive wages or overtime pay for the labor.

According to the lawsuit, the company also subjected all of its employees to training fees that were deducted from their final paycheck if they didn't stay with the company for six months, were fired, failed to show up for a shift, or didn't give two weeks' notice before quitting. Managers were required to stay for a year to avoid the deduction. Baristas were allegedly required to pay $300, while managers had to fork over $1,200.

"As a result, Plaintiff Keely Siegel did not receive her final paycheck as a result of Defendants having so charged them," the suit says, repeating the same line about Valle later in the suit.

Steve Webster, a spokesperson for Bikini Beans Coffee, did not respond to New Times' request for comment on the lawsuit.

The plaintiffs are seeking compensation for unpaid wages, damages, and attorneys' fees.

Read the full complaint below: