Benjamin Leatherman
Bottled Blonde in Scottsdale was shut down August 29.
Scratch GLOW Shots & Cocktails in Tempe and Scottsdale’s Bottle Blonde and Casa Amigos off the list of local bars open for business again, at least for the immediate future.

The closures came only days after ADHS allowed certain Maricopa County bars to reopen with restrictions.
At a press conference earlier on Monday, ADHS director Dr. Cara Christ told local media the department’s investigation into all three bars was due to online complaints and notifications from law enforcement.

According to ADHS, each bar was forced to close after “jeopardizing the health, safety, and welfare of the public.” Specifically, each bar violated attestations their owners or management made to the department that they’d follow safety guidelines aimed at preventing the spread of COVID-19, which was one of the conditions of reopening.

On Thursday, August 27, ADHS announced that bars or nightclubs offering dine-in service could reopen at 50 percent capacity, albeit after submitting attestations to the department that they’d follow certain rules. Those include limiting groups to 10 people or less, eliminating dance floors and areas where patrons could stand around, and requiring masks and social distancing. 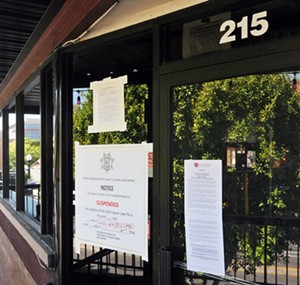 Notices from the Arizona Department of Health Services and Arizona Department of Liquor Licences and Control taped to the front door of GLOW.
Benjamin Leatherman
Bottle Blonde and Casa Amigos, which are both owned by Scottsdale-based bar/restaurant company Evening Entertainment Group, resumed business on Friday, August 28, and were reportedly busy. (KNXV Channel-15 broadcast a Snapchat video shot at Casa Amigos showing a packed dance floor and bar area.)

The following day, ADHS shut down both bars, which are neighboring businesses along the nightlife-heavy Indian Plaza, stating that liquor department investigators witnessed rules regarding social distancing, masking, dancing, standing, and table occupancy limits being violated.

(It’s not the first time that EEG’s businesses have been dinged by the state for breaking COVID-19 safety rules. Back in June, Bottle Blonde, Casa Amigos, and Hi-Fi Kitchen & Cocktails were warned by the liquor department they were risking losing their license after flouting social distancing regulations.)

GLOW, which is located along Mill Avenue in downtown Tempe, reopened on Saturday, August 29, per its Instagram. According to ADHS, there was no enforcement of social distancing at the bar, and patrons were seen standing or dancing during after opening. The bar also wasn’t functioning as a dine-in establishment, as its owner Jay Johari claimed on GLOW’s attestation to ADHS.

A shutdown order was issued on Sunday, August 30. Johari then reportedly posted a video to the nightclub’s Instagram, which has since been deleted, with footage of patrons standing apart from each other inside the club and the caption “The liquor board shut me down for this. 25 percent occupancy with food. 10 people standing is what did it!”

All three bars can only reopen after getting permission from ADHS, according to the department.

Christ said at the press conference earlier this week that the department will continue to investigate any complaints of bars across Arizona that have potentially violated COVID-19 safety guidelines.

At the same press conference, Arizona Governor Doug Ducey advised bars and other businesses (such as restaurants, gyms, and theaters) to follow the regulations.

“If people will follow the guidance, things will go much better,” Ducey said. "We want you to be able to operate safely."