Super Stereo
Lauren Henschen (center) during her Super Stereo days.
Plenty of local musicians and songwriters work other jobs. Most don't wind up with their songs featured on TV shows. Lauren Henschen, the CEO for a Roosevelt Row venue called Phoenix Center for the Arts, is a relatively rare exception.

She’s written songs featured in episodes of the sitcom Parks and Recreation, the crime drama Rizzoli & Isles, and the reality television show Keeping Up With The Kardashians. Lately, she’s been reminiscing about songwriting, and time spent playing on local stages. 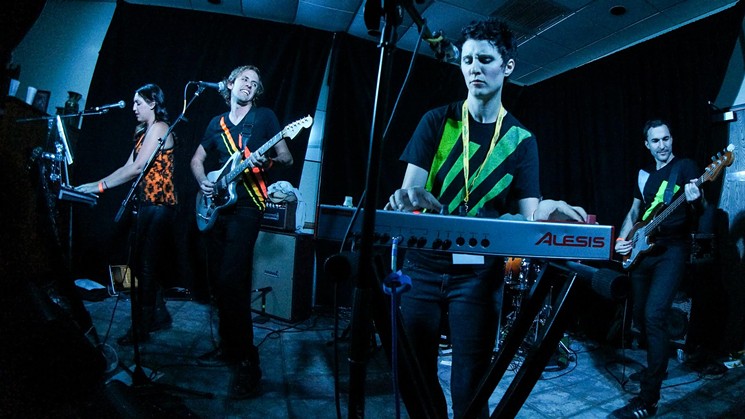 Lauren Henschen (right) did vocals, guitar, and synthesizer for Super Stereo.
Super Stereo
Several years ago, Henschen was part of a five-member electro-pop group called Super Stereo, whose work topped the MTV video charts during the heyday of Daft Punk, Nicki Minaj, and Panic! at the Disco. The band signed with Fervor Records, a Phoenix label that specializes in placing songs in films and TV shows.

Nowadays, Henschen is busy running the center and coordinating the venue’s participation with Save Our Stages, a national effort to help indie venues struggling due to COVID-19.

It’s brought back memories of her own time spent playing independent venues, including Trunk Space, Modified Arts, and the Paper Heart. She started out doing solo performances, singing and playing indie songs on the guitar.

Songwriter and Phoenix Center for the Arts CEO Lauren Henschen.
Mirinda DiBiase
Henschen grew up playing the violin in school but taught herself to play guitar in middle school and high school. "My brother picked up a guitar at a pawn shop and I learned to play using a Disney songbook," she recalls. "It was sort of my secret, because my parents were divorced and I only got to play it every other weekend at my dad's house."

Later, Henschen taught herself to play synthesizer, an instrument she played with Super Stereo. “We flew to New York to make a music video, and toured quite a bit around the Southwest and the West Coast.” One of her fellow band members became a longtime songwriting partner.

Everyone in Super Stereo had a persona, and they all wore a different costume. Henschen went by Lo, and says she’s still got her costume “just in case.”

The band never formally disbanded, but they’ve all gone on to other things, from aerospace engineering to running a pool business. Even so, Henschen is still songwriting. Lately, she’s been working on a songwriting project with her dad, who’s a professional poet.

It’s possible that more of Henshen’s work will land in TV shows or films, but she’s more focused on finding new ways to express herself during the pandemic. “We’re all looking for outlets to take those creative journeys,” she says.