Roman’s Oasis in Goodyear Is Moving … About 400 Feet

Lauren Cusimano
Roman's has its own tree.
There’s a tree in the kitchen at Roman’s Oasis, a multiroomed roadhouse-style bar and dancehall that's been serving up drinks in Goodyear since 1986.

It’s a pine tree, planted in the 1920s, and the trunk (heavily wrapped, to prevent “critters” from getting into the kitchen) is about 40 inches around.

As the legend goes, it's also been grafted with a hazelnut tree and a rubber tree.

“My dad always said don’t ever let anything happen to that tree because it will always protect you,” says owner Myra Curtis, daughter of Roman Comer, the bar’s founder. “I never knew what he meant by that, until I bought the bar.”

She places a single hazelnut from the tree on a tabletop and smashes it with a rocks glass. Among the rubble is a bright, yellow condom. It will always protect you.

Eventually, though, you'll have to look for that decorative bird about 400 feet southwest. Here in the west Valley, Loop 303 is expanding, and the powers that be have determined it's necessary to add an off-ramp at Yuma Road. Currently, there are four lanes heading west and just one heading east. That single east lane runs very close to Roman's smoking patio. To accommodate all the traffic anticipated to come in off the new ramp will require a widening of the road. Which means Roman's will have to back up a bit.

Curtis and her team have known this was coming for about four years. Roman's landlords are developers who've had the property on which the bar sits — known as the Derosier Ranch — rezoned and are keen to install restaurant and retail businesses along Yuma Road once the widening is done. Roman’s will be the anchor of this development once they've built a new Roman's, almost precisely like the old one, at the western end of the current parking lot, about 133 yards away. 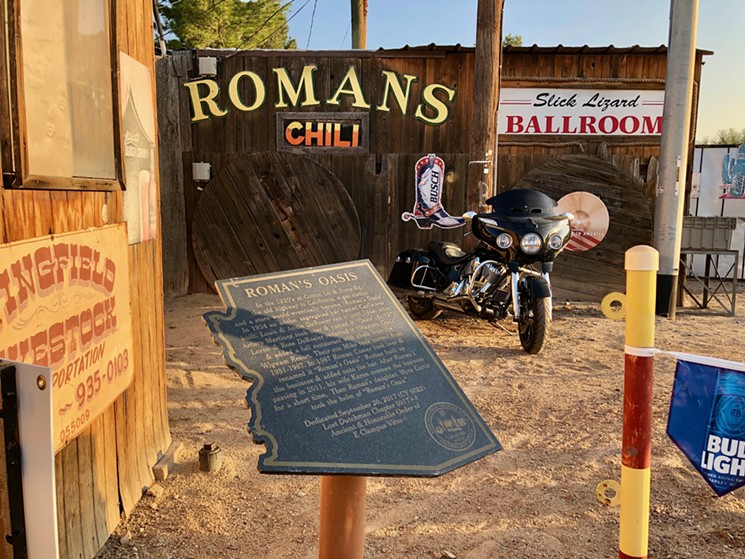 A plaque outside of Roman's Oasis gives the history of the bar and the Derosier Ranch.
Lauren Cusimano
Curtis has made sure the City of Goodyear is aware that Roman’s Oasis isn't just any old bar. She's appeared before the Goodyear City Council, some of whose members are customers, to emphasize the significance of the structure and the bar's history.

“It was all about making sure they understood how important Roman’s is to the community, thanking them for allowing us to keep the crazy stuff on the roof, and … asking for them to help us keep that history and my dad’s legacy going,” she says.

She also just wanted to reconfirm that Roman's wants to stay in its current spot as long as possible.

It might be awhile. Until recently, they were anticipating a 2021 move. But Doug Nick with the Arizona Department of Transportation tells New Times that this project “will not begin before 2025.”

True to form, though, Curtis already has a plan. Roman's reached its current size gradually, over many years; when Comer wanted to add a room or patio, he'd just ask customers to bring their tools in for some midnight construction sessions. "By the time people came in the door [the next day], there'd be a new room," she says.

The new Roman's will be built the same way, Curtis says — by patrons.

She's started an email list ([email protected]) that'll alert friends, family, and customers when certain rooms will be getting attention. The plan is for the volunteers to wrap and pack all the vintage tin signs, beer and racing decor, and photos of past and present customers and put them in marked bins (she's already bought the bins) so everything is kept in order. Curtis has a photographer coming in to ensure all will be hung up in the new place exactly as it’s displayed now. Even the wood panels are going.

“As best we can, we'll reuse that wood,” Curtis says. “We’re going to try to keep the same character, the same flavor of Roman’s so that our customers aren’t disappointed."

The new place will have the same layout, the same square footage, and the same wild roof ornaments and lawn décor. There will be a few differences, aside from the coordinates. The current backroom at Roman’s will be an open-air patio. The outside won’t be firebrick like the current spot. And the whole place will be much better insulated. Construction won’t disrupt operations, Curtis says, except for the projected week when Roman’s will be closed to make the final move. 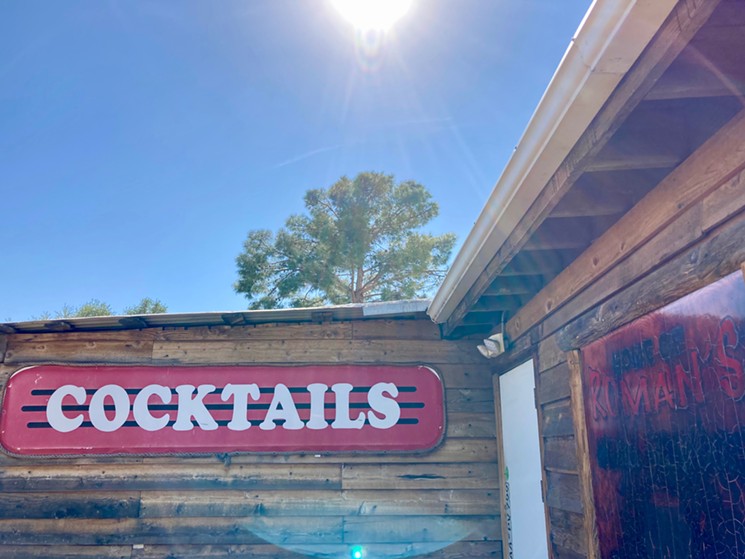 “I’ve been saving my pennies so that hopefully we can move the tree,” Curtis says, her perfect smile always half there.