Kelsee Becker
A crowd at the 2020 edition of the Innings Festival.
If nothing else, COVID-19 has been a profound lesson in the delicacy of life. Institutions, people, and ideas that we thought of as untouchable have broken down to some extent this year. There's likely no better example of this than the live music industry, a dynamic part of any city's local cultural and economic infrastructure.

In its early months, 2020 was shaping up to be a massive year for venues nationwide, and that rang especially true for those across the Valley.

"In February, everyone I know was projecting their best year ever," says Stephen Chilton, who runs Psyko Steve Presents and The Rebel Lounge. "Everyone I know had more shows on sale, had better ticket sales, and more artists were on tour. Things really were in a great place."

Now, promoters and venue owners are having to redefine success amid a global pandemic.

This isn't just a mere crunch, either; for countless venues, it's an existential crisis.

Luckily, there's possible help on the horizon: the Save our Stages Act. Introduced this summer by Senators Amy Klobuchar (D-MN) and John Cornyn (R-TX), SOSA would provide $15 billion (originally $10 billion) to independently-owned venues across America. SOSA, which passed the House of Representatives on October 1, would provide grants up to $12 million for expenses like mortgages and capital expenditures (per Playbill),

NIVA has been a major proponent of SOSA, working to raise awareness as the bill gains momentum.

"We have a significant amount of support through Congress to both the House and the Senate," Moose says. "It's just a matter of getting this to pass through and having everybody sign off on it." In the Senate, SOSA is bundled as part of a "smaller" relief effort, the $370 billion Heroes Small Business Lifeline Act. 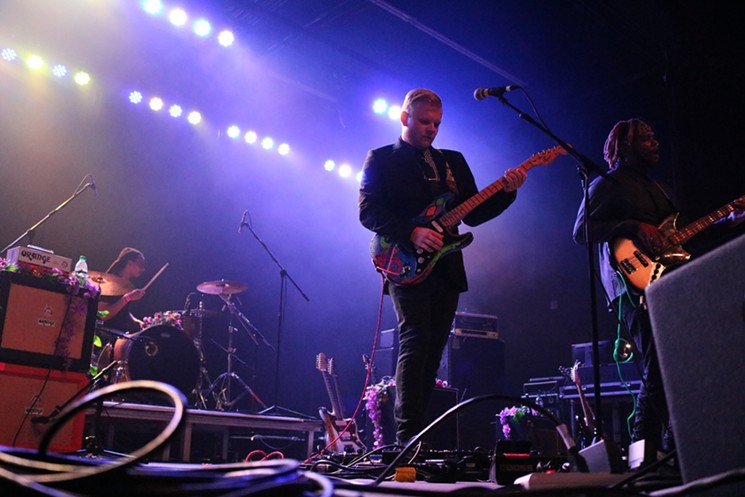 Paper Foxes perform at Marquee Theatre in July 2018.
Jordyn Carias
But as with other forms of assistance, SOSA's become another casualty of partisan politics.

"I was told that Save our Stages was on the green side for both sides until Trump squashed it," says Tom LaPenna, who operates Lucky Man Presents and the Marquee Theatre. "So we are cautiously optimistic."  Trump had halted the latest COVID relief negotiations in early October before vowing to revisit talks following the election, according to the Associated Press.
Not every form of assistance, including PPP loans, is always the best fit, though.

Some venue owners/operators have had to actually educate those responsible for overseeing relief efforts.

"With NIVA, on the national stage initially, it was educating politicians about why venues are different," says Brannon Kleinlein, who owns Last Exit Live. "Because a lot of times they think, 'Okay, you're a venue, so you're a bar. We've done stuff for bars.' But they don't understand it's not the same thing, and how tours are booked in advance. There definitely hasn't been enough of that on a local level."

LaPenna has experienced similar issues with our own local government and representatives.

"It may have been [U.S. Representative Greg] Stanton, and this is from his office, but they said, 'Once it gets on the floor, then I'll support it.' That was like a slap in the face," he says. "At the state level, with [Governor Doug] Ducey and [U.S. Senator Martha] McSally and Stanton, I've sent multiple letters. For the most part, I got a form letter back like no one read them."

Stanton's office notes that the Congressman has in fact already voted in favor of the bill.

“The live entertainment industry needs real, meaningful help, which is why Congressman Stanton was one of the first sponsors and supporters of the Save Our Stages Act," Seth Scott, Stanton's chief of staff, tells New Times. "Congressman Stanton is proud to have a strong relationship with the music industry in the Valley dating back to his time as a City Councilman and Mayor, and he will continue to be a fierce advocate for these incredible members of our community in Congress.”

It's especially confounding because, as Kleinlein noted, "there have been some states that have successfully done this." As WQOW.com reported in early October, Wisconsin Governor Tony Evers announced $100 million in recovery spending, with $15 million earmarked for live music and performance venues.

PUP played The Van Buren in February 2020.
James Deak
Bob Corritore, who owns and operates The Rhythm Room, says he hasn't paid his electrical bill in several months. (Fortunately, companies like APS are working with him and other owners.) Charlie Levy, who runs Stateside Presents and operates Crescent Ballroom and The Van Buren, says they've "pretty much been in hibernation mode since March, just sort of waiting it out until the right time to reopen."

"I'm talking to venues every day that are deciding how much longer they can go without aid," Chilton says. "Do I sell my car? Do I mortgage my house? Do I empty out my savings?" LaPenna says he's kept the lights on thanks to funds "directly from Tom LaPenna Inc."

Financial viability has always been tenuous for venues. Kleinlein noted that most venues "live month to month, just like a lot of other people do."

As Moose explains, "I don't think a responsible answer is to say, 'Well, take a loan.' Because these are thinly profitable businesses to begin with."

Any money these venues have generated as of late, like from livestreams, tends to be minimal.

"All of that is pennies on the dollar," Chilton says. "That is not a business model, and it is not a real revenue stream. It's a way to stay engaged with your fan base, and to keep your social media active." Levy says they've largely avoided streams, though "doors are open for bands and artists that want to come in for a good cause."

Many local venues closed of their own accord, even as other industries or individual businesses held out for as long as possible.

"We don't want to hurt anyone, and it's very counterintuitive to what we do," Corritore says. "We have a real social contract to protect people. Being open during a pandemic would be against our mission statement."

The hope is that fans remember that commitment to public safety. LaPenna says that the majority of ticketholders at Marquee have yet to request refunds. Kleinlein, meanwhile, is constantly receiving notes of encouragement from local music fans.

"Someone will send us something to our Facebook or Instagram," he says. "They'll say, 'Hey, just want to let you know, we're thinking about you and we miss you guys and we can't wait to come back for shows. We hope you're doing okay.'"

Oftentimes, that's been enough to remain positive as venues plot their eventual reopening. While there's no saying when they'll get the go-ahead, or even what that might look like, each venue has its own outlook.

The jam-packed crowd at 2019's M3F.
Jacob Tyler Dunn
Both Chilton and Kleinlein highlighted the possible difficulties of diminished capacity from a logistical and economic standpoint; as such, they might wait until they're allowed 100 percent occupancy. (Chilton's Rebel Lounge reopened on October 24, but only as a socially distant bar/coffee shop.)

Corritore says it would take time for The Rhythm Room to get going again as it raises much-needed capital. Kleinlein says Last Exit Live could be ready within a week, with the biggest issue being "inventory" (read: liquor). Levy and Stateside, meanwhile, have abandoned earlier game plans.  "We'll see what happens," Levy says. "I'm not smart enough to make any predictions."

Of all the local venues, though, LaPenna and Marquee may be most prepared. He and his team have set up a cashless interface, built Plexiglass at the bar, and established a PPE surcharge, complete with mask and hand sanitizer.

"We're thinking January, but with reduced capacity and social distancing and masks and all precautions in place," LaPenna says of a return.

All of this, however, ignores the larger issue of Phoenix's place in the national touring scene.

"When there is the ability to open, there's still going to be a three- to four-month period as we figure out how to route tours and get things booked," Moose says. "And Phoenix is the perfect example of that. If you guys don't have L.A. and Houston, who's coming through Phoenix?"

That's why several promoters, including Chilton and LaPenna, think that the early days of reopening could be a huge opportunity for local artists/bands to fill these spaces. Kayla Clancy, who records and performs as Meet the Sun as well as having worked at venues like The Jukebox, says this could be a renaissance for Phoenix's local scene. (Clancy is a former New Times contributor.)

"Maybe when performances come back, people will just let it all hang out," she says. "And I hope people are willing to collaborate with each other more. But I do hope that promoters take the time now to really listen to whatever comes their way. ... I feel like people need to start taking a little bit more time and some risks."

Corritore, who has run Rhythm Room for nearly 30 years, recalls similar, albeit less drastic downturns following 9/11 and the 2008/2009 recession. It's those moments, he says, that provided opportunities to reshape the industry for the better.

Levy hopes that fans and promoters alike will "be a little more grateful and realize how precious and special it all is." LaPenna echoed similar sentiments about a "change of culture," with a greater emphasis on collaboration across the city and industry.

It's Kleinlein, though, who may have the most cheery outlook. When things are back to normal (whatever that looks like), the Phoenix scene, and others nationwide, could very well be stronger for having survived this ordeal.

"I really hope that maybe this is the thing that can actually help elevate and take Phoenix to the next level in the music scene," he says. "To really get everybody coming out and seeing live music again and going to shows."

Visit SaveOurStages.com to donate money, buy merchandise, and find out how to contact your local representatives.

This story has been updated to include a statement from Congressman Greg Stanton.