Melissa Fossum
We hope you got to check out a few concerts before everything shut down in March.

The COVID-19 pandemic may have brought live shows to a halt, but local music in Phoenix chugged along in other ways.

Our top music stories of 2020 included Rage Against the Machine ticket drama, Kanye West's shady ballot tactics, and sadly, farewells to some beloved figures in the Phoenix music community.

The Van Buren will likely survive this crisis.
Benjamin Leatherman


10. This Is Bad for Everyone: How the Coronavirus Devastated the Phoenix Concert Scene

Live music was one of the industries hit hardest by the COVID-19 pandemic. Promoters and venue owners were shell-shocked not only by how many shows were canceled or postponed, but by the speed at which it happened. With cases currently on the rise again, there's no telling what the future looks like for beloved local venues.

Would you have voted for Ye?
Jason Persse/CC BY-SA 2.0/Flickr

Remember that scene in Heathers when Shannen Doherty was telling all her classmates different things to get them to sign Christian Slater's mass suicide manifesto? That's kind of what signature-gatherers did in Arizona trying to get Kanye West on the presidential ballot; people reported being asked if they supported "independent women's voices" or "third-party candidates," with no mention of West's name. Despite the subterfuge, West didn't make Arizona's ballot.

Sarah Shelton and her husband, Steve, tearing through one of The Brand's tight punk rock songs.
Karl Wentzel


8. A Tribute to The Brand's Sarah Shelton

When punk rocker Sarah Shelton died at the young age of 38, the loss was felt by many in the Phoenix music community. Friends, family, and fellow musicians remembered her as a force to be reckoned with, a talented artist and poet, and a proud Chicana and Native American. 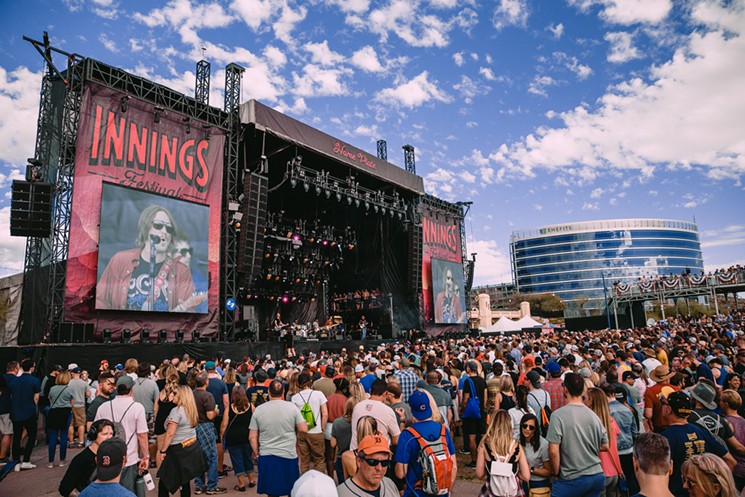 Remember when music festivals were a thing?
Kelsee Becker

It feels like a million years ago, but it was only in early March that thousands of attendees gathered at Tempe Beach Park for Innings Fest. Our reporters gave you all the deets from sets by Weezer, Portugal. The Man, Pedro the Lion, and others. Unfortunately, but not surprisingly, there will be no Innings Fest in 2021.

Char's Has the Blues in midtown Phoenix finally found a buyer.
Google Maps

Popular blues club and frequent New Times Best of Phoenix winner Char's Has the Blues had been closed for several months due to the pandemic when we reported in June that the property was up for sale. Char's found a buyer last month; no word on what will become of the beloved establishment.

Tempe resident Tommy Gwinn added some color to his neighborhood when he commissioned artist Gina Ribaudo to paint a mural on his property wall. The piece commemorates local musicians who have passed on. Right now, the mural includes Vince Welnick, Glen Buxton, Doug Hopkins, Chester Bennington, and Mike Condello, but there's room to add more faces in the unfortunate event it becomes necessary.

The Sun Club was hot, scummy, and beloved by many during its run.
Tempe History Museum

Nostalgia pieces were a big hit with our readers this year. Turns out, nearly everyone who has lived in the Valley for a long time has great memories of some of our best music venues that are gone now, including The Sun Club, Bash on Ash, and Compton Terrace. 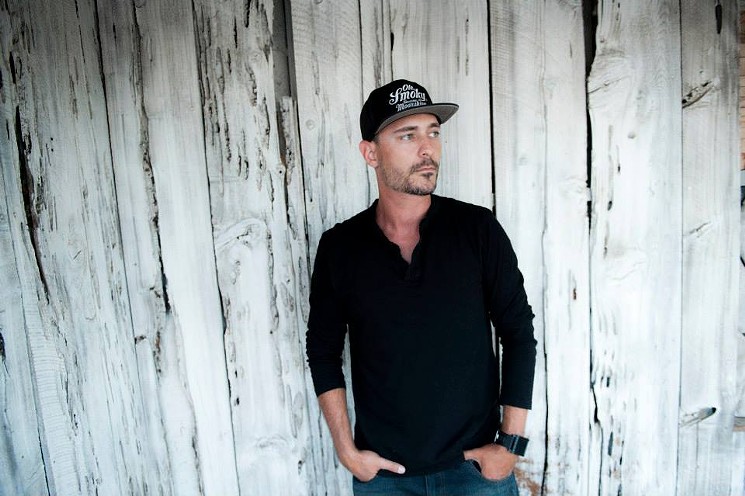 News broke late on a Monday evening that DJ Steel, a popular fixture at bars around town, had died of COVID-19. The 42-year-old was the entertainment director for the metro Phoenix Dierks Bentley’s Whiskey Row locations, and a beloved figure in the local music scene. A GoFundMe to help his widow with medical bills and other expenses raised more than $30,000.

Rage Against the Machine had some very angry fans earlier this year.
Penner/Wikimedia Commons


2. Phoenix Rages Against Rage Against the Machine

Tickets went on sale in February for a late March Rage Against the Machine concert date in Glendale, the band's first show in the Valley since 2011. So when seats sold out in less than an hour, fans were big-time mad, taking to Twitter to excoriate the band. RATM eventually added a second show, but it was all a moot point anyway: Both dates were canceled due to COVID-19.

Founding member of Sacred Reich Jason Rainey onstage in the early days of the band with one of his favorite guitars.
Stephanie Cabral

The death of Arizona thrash metal icon Jason Rainey was a blow to the local music scene. Sacred Reich bandmate Phil Rind and former band manager Gloria Cavalera paid tribute to their friend and colleague, recalling the early days of the band and Rainey's kind nature.