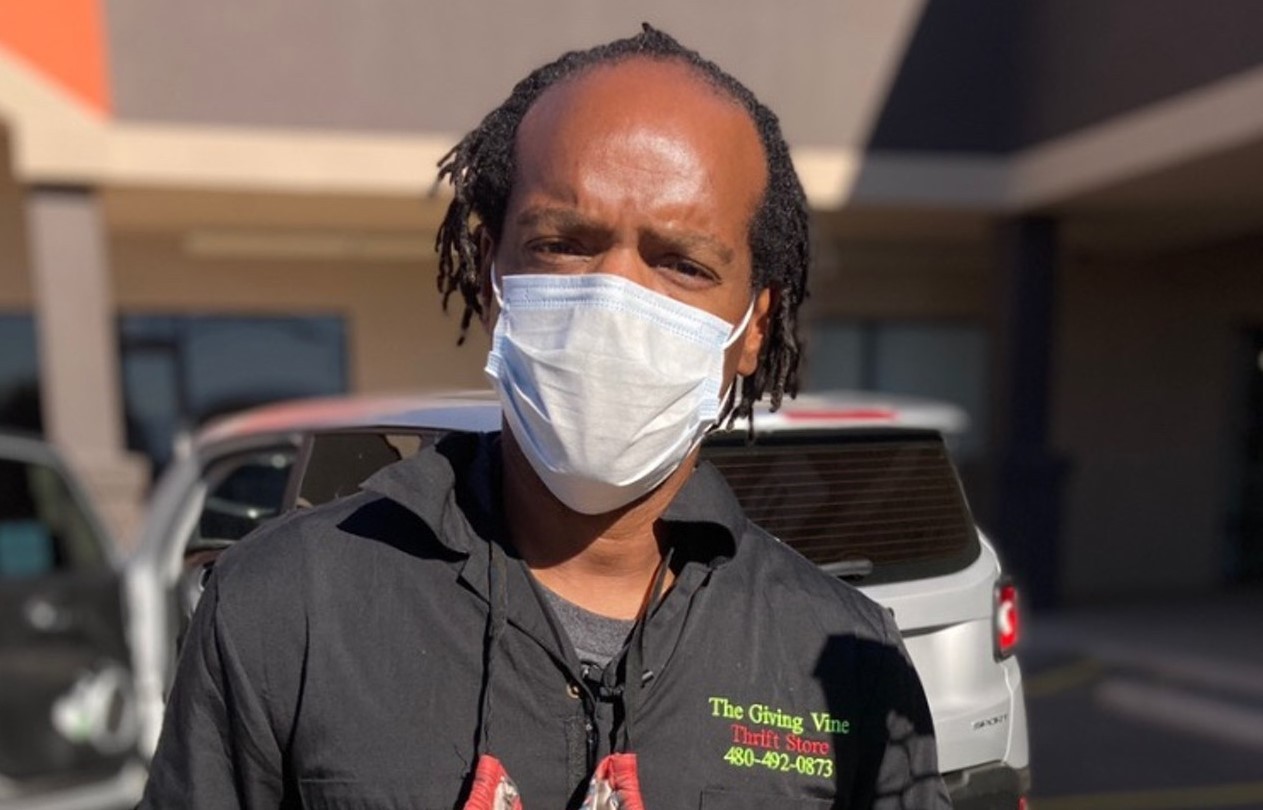 He wasn’t too proud to admit, for instance, that in February he lost the lease on his apartment and had to move into The Giving Vine, his Grand Avenue thrift shop, and sleep on a fold-out mattress on the floor. And he was humbled by the generosity of customers old and new who came by The Giving Vine after hearing, last month, that his commercial landlord was about to evict him.

“I was pretty behind on my rent,” Blackwell said last week, “and my landlord is a businessman, too. I get it. He needed to be paid.”

The store, which Blackwell had run since July of last year, had fallen on hard times with the COVID pandemic. People didn’t visit a thrift store when they were afraid to leave the house, Blackwell said. “It’s not like I sell anything essential. Furniture, jewelry, shoes, sometimes things people donate. We had someone donate dried fruit, but we had to give it away. We’re not licensed to sell food.”

Blackwell, an African-American Puerto Rican Jamaican, described himself as a “local guy” who has lived in Phoenix for an awfully long time, though he wouldn’t say exactly how long. (“I’m hesitant to give away my age.”)

After a local news station aired a piece on his dilemma, shoppers descended on The Giving Vine to buy up secondhand things. Later, nearly 200 people donated to a GoFundMe account set up by a concerned customer. Blackwell wrote a personal thank-you note to each person who donated.

One man who came to the store was bald from chemotherapy. He told Blackwell he was dying.

“I put my hand on his shoulder and I prayed for him,” Blackwell said. “He gave me $500 in cash. That was the story that touched me the most.”

Another visitor told Blackwell, “I am giving you this donation because I’m a landlord and you didn’t bad-mouth your landlord. I like your good attitude.”

People were generous. They bought $10 worth of stuff, paid with a $50, and told Blackwell to keep the change. One couple came into his store and handed him $300. He referred to these people as his “guardian angels,” individuals with mortal names — Francis Robinson, Chloe Jones — who were sent, he believed, from heaven.

The money they gave wasn’t his; it belonged to the community. “I am just the steward of these funds,” he said. “If I didn’t see it that way, my mother would come down from heaven and smack me upside the head.”

Blackwell’s mother continues to inspire him, 10 years after her death. When she was still alive, he admitted, he’d been a selfish person looking out for himself. After she died, he resolved to be selfless, as she had been. “I can never complain, ever again, about anything. I can be pissed off, but not hourly like I used to be. Total strangers giving me money took that attitude away from me.”

All this benevolence inspired Blackwell to create what he called “an eviction prevention raffle.”

“We have a string of handmade Zuni pearls, and you can buy a dollar raffle ticket to win them,” he explained. “The proceeds go to someone who might be about to get evicted from their apartment.”

When not selling shoes and paying the rent of strangers, Blackwell delivers food boxes to the homeless. Sometimes charity work is the only part of his life that feels normal these days. Lately, people have been stopping him on the street to wish him well and say they’d seen him on TV. And an independent filmmaker who’s making a documentary about businesspeople dealing with the pandemic has been following Blackwell around with a camera. “I’m like, wow, I am getting recognized out in public, someone wants me in their movie. What’s next?”

For now, he’s moving to bigger digs in January. “We outgrew this space. The new address is a secret,” Blackwell said. “It’s part of our mystique.”

Blackwell insisted, “I am absolutely clear on one thing: I have got to make good on all this support I’ve received. Everyone expects The Giving Vine to be successful now that they’ve stepped up and given us a bump.”