The 15 Best Restaurants for Chinese Takeout

Lauren Cusimano
Takeout from Chou’s definitely keeps well.
There's nothing more exciting than Chinese takeout. It means you're in for an evening of comforting, overly flavorful entrees, rice dishes, and probably some shareable appetizers. While there are usually fantastic leftovers, the first round of kung pao whatever, steaming eggrolls, and Chongqing lo mein is always anticipated. Here are 15 Chinese restaurants offering great takeout.

Multiple Locations
Chou's Kitchen, which serves the cuisine of northeastern China, has a diverse menu worth spending some time on. We love the stir-fried eggplant with minced pork and garlic sauce, the fish filet in hot chile oil, and above all, the xiaolongbao, steamed dumplings filled with soup and pork. But no Chou's order would be complete without the beef and/or pork pies (which almost taste better after a short car trip).

5920 West Greenway Road, Glendale
This extra-casual, diner-style Chinese restaurant in the west Valley is known for its friendly atmosphere and easy ordering when it comes to takeout. Golden Dragon's crispy duck and sizzling rice soup are sensational, but we recommend the honey garlic chicken. Piles of breaded chicken comes gooped with that salty-sweet honey garlic sauce. The more it congeals in the takeaway container, the better it is. For a little kick of heat, order the chicken with garlic sauce — pretty much the same thing though more focused on spice than sweetness. Mix that sauce with the accompanying rice and you’ll be more than golden. 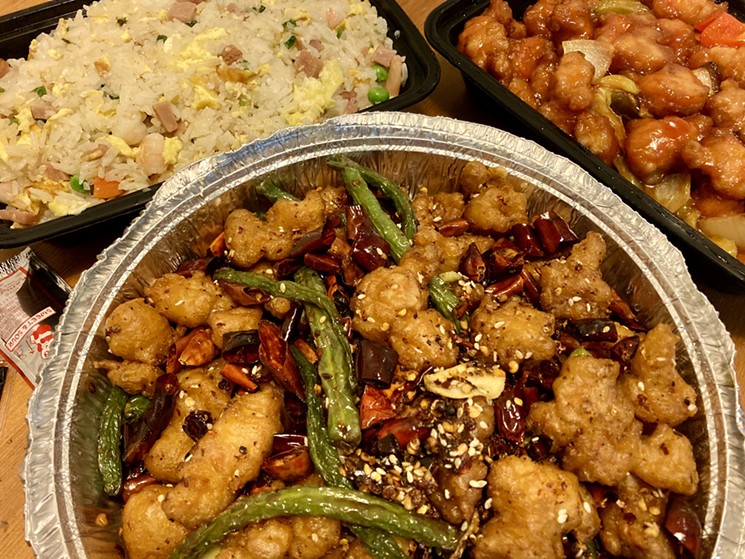 1845 East Broadway Road, Tempe
The second most interesting part about Old Town Taste is that it's not actually in Old Town Scottsdale. It's in a strip mall in Tempe, easily spotted by its bright-red sign. The most interesting part, obviously, is the food. The family-owned Chinese restaurant has a lengthy menu with a Sichuan bent, promising dishes like braised eggplant, mapo tofu, and Szechuan-style blood curd. But what brings us back, again and again, is the Chongqing-style platter. This house special is offered as chicken or fish, and both options are fantastic, thanks to chunks of meat coated in that thin, crunchy batter and topped with string beans and chile.

1853 West Broadway Road, Mesa
If you’ve ever spent time eating in China, the aromatic dining room of Original Cuisine will bring you back. The Mesa eatery’s menu leans Szechuan-style; items include Chongqing lo mein, spicy duck wings, breaded spareribs, stone pot-braised tofu, black pepper beef, and kung pao chicken. If you just really enjoy posting food photos — the pork belly with garlic sauce is a must. With its thin strips of pork belly draped over a wooden rack, all of it hanging over a bowl of garlic sauce, it’s a major statement dish. But good luck setting it up at home. 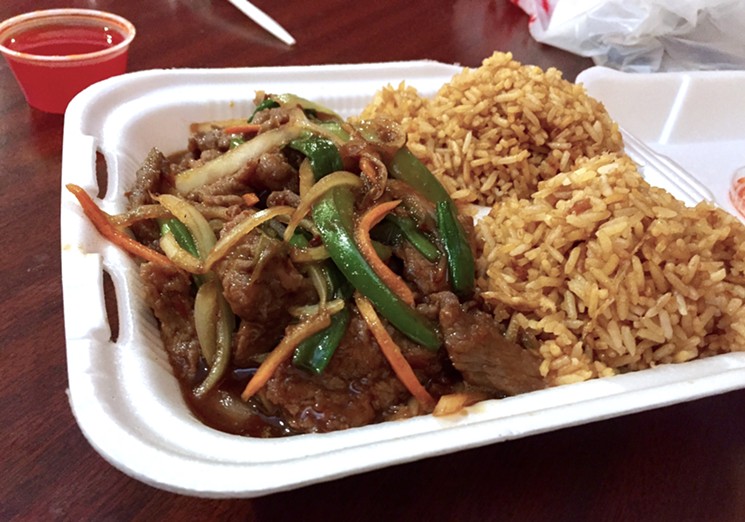 3509 West Thunderbird Road
Abacus Inn is one of those unsuspecting don’t-judge-a-book-by-its-cover strip mall joints that’s easy to drive right by. But then you’d be missing out on impossibly crispy fried wonton starters, spicy beef with just the right amount of volcano, kung pao cabbage that’s super saucy but somehow still crunchy, and house special chow mein loaded with pork, chicken, shrimp, and oodles of noodles. Everything comes out sizzling hot — seriously, it will still be steaming when you get home. soy sauce?” 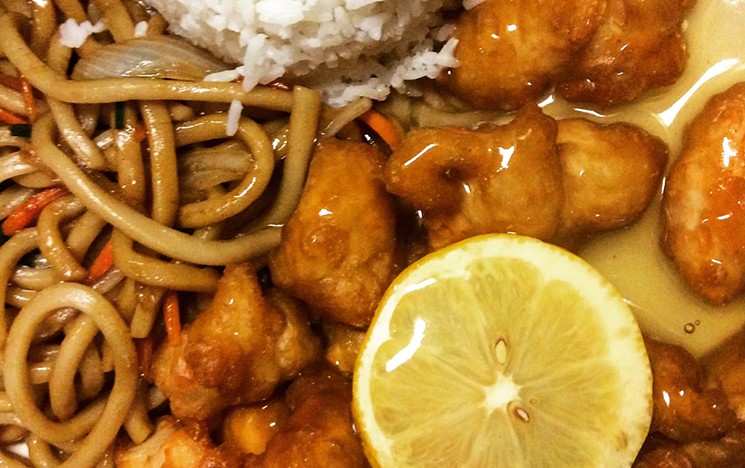 524 West University Drive, Tempe
The petite, glowing sign in front of Little Szechuan is hard to miss off University Drive near Arizona State University. This classic Chinese restaurant has been in Tempe since 1976, and the menu even has ASU-themed signature dishes, including the Sun Devil — a maroon and gold dish made with homemade chili, bamboo shoots, and your choice of protein (students even receive a discount; just let your server know).

13843 North Tatum Boulevard, #15
For those who live in the north Phoenix neighborhood around Nee House, this restaurant is a blessing. Amid chains and fast food, this spot offers a solid menu of Chinese cuisine with a few remarkably good and authentic dishes blended in. You can definitely get your fix of Americanized dishes here, but skip them if you're feeling adventurous and go for something from the sea. The restaurant offers everything from sea cucumber to whole lobsters, which will be plucked from the tanks, prepared however you wish, and packaged to-go. 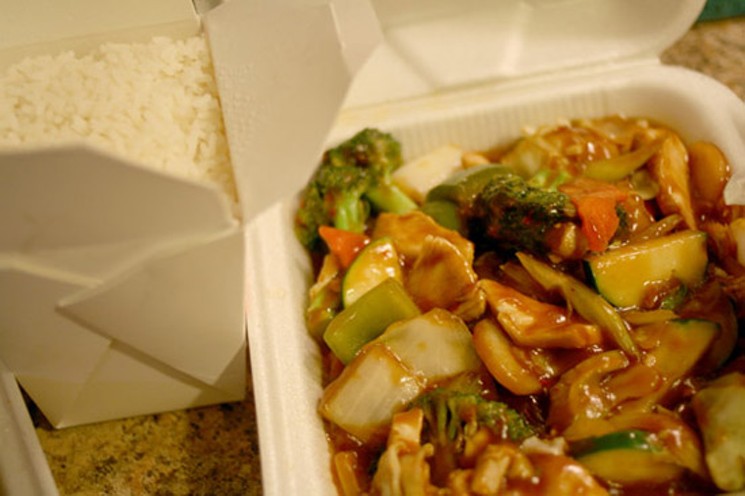 2545 North 32nd Street
There's arguably no sweeter family in the Chinese takeout game than the one that runs King Wong. While we love supporting their family business, the restaurant's absolutely gigantic delivery area, cheap deals, and monster portions don't hurt either. Twice-cooked pork, which just means double the tasty breading, is a favorite for lazy nights in, and one entrée-size order once made three filling meals for us. Call in your order and pick it up, or, if you live pretty much anywhere in east Phoenix, including parts of downtown and Arcadia, you can just have them bring it to your door.

9044 West Union Hills Drive, #101, Peoria
Shanghai Grill has been serving Asia Pacific and Chinese in north Peoria cuisine since 2006. This Cantonese restaurant offers house specialties like, in case you couldn’t guess, Cantonese-style chow mein, as well as entrees of honey garlic chicken, walnut shrimp, and pu pu platters. You can also find takeout classics like kung pao chicken, Mongolian beef, and shrimp with lobster sauce. However, don’t get too excited about takeout Tuesday; Shanghai Grill happens to be closed on that day.

1602 South Seventh Avenue
The ordering system at Liyuen isn’t exactly an art form, but it works. To order, you shout through the window and you’re given a token with a number on it. You can exchange it for popular dishes include jalapeno chicken wings, orange chicken, and shrimp fried rice. The service isn’t anything to brag about, but who cares when portions are hefty, prices are not, and the food comes out piping hot.

2710 East Indian School Road
China Village is always a solid option for takeout. This friendly, old-school spot (it opened in 1985) serves a menu that spans Hunan, Mandarin, and Szechuan cuisines. Have the friendly team here pack up some almond chicken, Hunan beef, Wor wonton soup, and the crab rangoons for takeout, which will look extra nice spread across your coffee table. 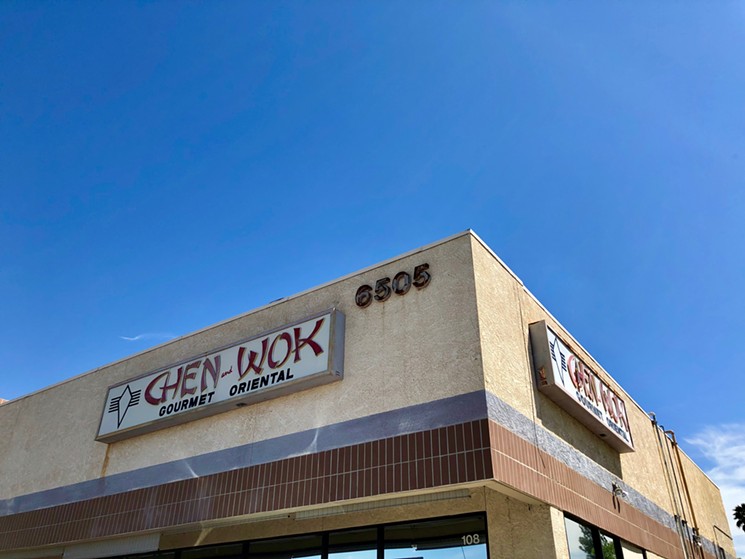 6505 North Seventh Street, #108
A hole-in-the-wall Chinese-American eatery if ever there was one, Chen & Wok is a counter-service lunch and dinner spot serving up your classic kung pao chicken, chop suey, and egg foo young dishes. The service is quick but always friendly; dishes are always overflowing with meat, rice, and noodles; and the team is always willing to work with substitutions. Just take your piping hot shrimp with lobster sauce to go.