Art News: An Update on the Rose Johnson Mural, a New Makerspace Opens, and More 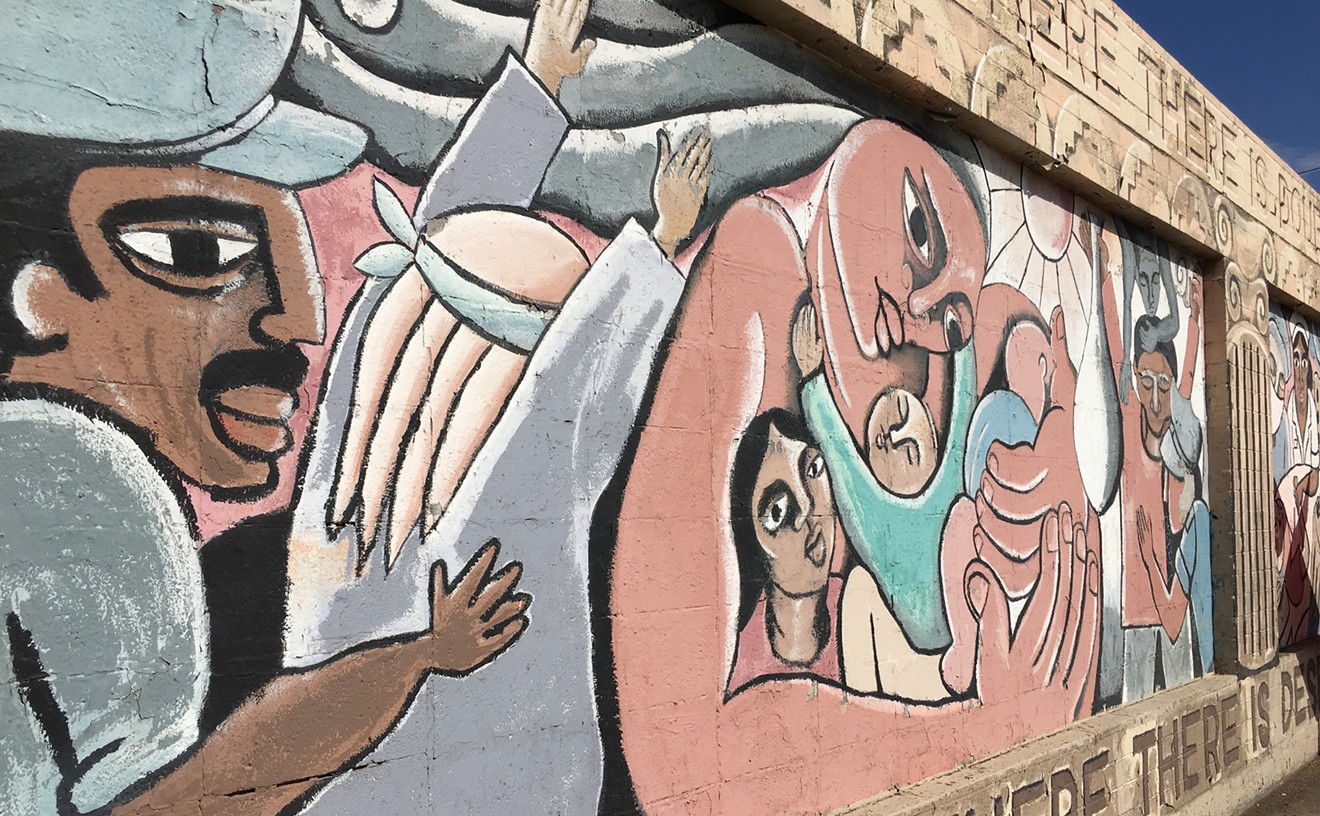 Lynn Trimble
Part of Rose Johnson's mural on 16th Street before it was painted over with solid beige.

Here’s a quick Thursday-morning rundown of news from the local arts scene. Enjoy.

The Civitan Foundation, which recently painted over the Rose Johnson mural on its building at 16th Street and East Thomas Road, has selected artist Isaac Caruso to create new artwork for the south-facing portion of the building. CEO Dawn Trapp expects the mural to go up in the next 30 to 60 days. The design will be driven in part by conversations with community members and may include visual elements that pay homage to Johnson and her art, according to art consultant Donna Isaac, who was brought in to assist with the mural project.

A new makerspace called Phoenix Forge opened at 535 West Van Buren Street on February 16. Operated by GateWay Community College for the Maricopa County Community College District, Phoenix Forge will be open to MCCCD students and staff, as well as members of the public. The 22,500-square-foot facility is located in a former warehouse. Organizers note that several artists will be working at the makerspace, and they're commissioning an artist to create a mural for the west wall at the site. Additional details will be announced in March.

Scene from Ballet After Dark, which was directed by B. Monét.
Indie Film Fest

Several new outdoor artworks are being installed around metro Phoenix this month. The Gallery at TCA commissioned Roy Wasson Valle to create a piece on a clear wall at the Tempe Center for the Arts sculpture garden, which will be visible from The Gallery at TCA and the path running along Tempe Town Lake. An installation titled Water will be on view at Desert Botanical Garden starting on February 23. Created by Natasha Lisitsa and Daniel Schultz of Waterlily Pond Studio, the piece spans 100 feet and was made with materials that include 8,000 colored wooden dowels and 2,000 red flowering blooms. Several art exhibits have opened recently at venues that have in-person hours (with mask and social distancing requirements). Scottsdale Museum of Contemporary Art will show works exploring African American and queer histories, as well as Latinx experiences in the Southwest borderlands, starting on February 20. Mesa Contemporary Arts Museum recently opened its annual exhibition of contemporary crafts, with works ranging from sculptures to fiber art. New exhibits at Phoenix Art Museum include “Sweet Land of Funk,” which reveals ways the mid-20th century Funk art style reflected the politics, social constructs, and creative impulses of its time. New exhibits are also on view at the Heard Museum and ASU Art Museum.

The Stavros Niarchos Foundation is accepting applications for grants focused on U.S. small businesses owned by people of color, women, and veterans. The initiative, which is also focused on businesses in lower-income communities, includes grants up to $20,000 each, along with virtual training and mentorship. The application deadline is March 19. Applications are also open for Shuttered Venue Operator Grants offered by the U.S. Small Business Administration, as well as various grants offered by Arizona Commission on the Arts.