This week you can up your grilling game, unleash your inner science nerd, or learn to throw pottery with a glass of wine on hand. Here's a look at the best live and virtual things to do in metro Phoenix, along with a friendly reminder that masks and social distancing are still the way to go.

This is year 33 for the Art Detour event meant to highlight the city’s creative side, which kicked off on February 20 and continues for 33 days. This year’s lineup includes the 21st Annual Artlink Juried Exhibit, a multimedia affair showcasing 85 of the 725 artworks submitted for consideration. It’s on view now, and through June 13, at the FOUND:RE Phoenix Hotel, where you can pop in to explore the art offerings at whatever time suits your fancy. The free exhibit includes works by artists working with diverse mediums and styles, including Mia B. Adams, Diana Calderon, Angel Castro, Min Kyu Kim, Katharine Leigh Simpson, and John Tuomisto-Bell.

Living in the Southwest, we’re surrounded by turquoise, an opaque blue or green mineral that’s found on six of the world’s seven continents. Odds are, you’ve worn a piece of the hydrated phosphate of copper and aluminum without knowing much about its history or cultural context. Learn more about its myriad uses and significance during a free virtual presentation called For The Love of Turquoise happening from 11 a.m. to 12:30 p.m. on Tuesday, February 23. The talk features Carrie Cannon, a member of the Kiowa tribe of Oklahoma, who is also of Oglala Lakota descent. Checking out the cooking classes space at Sweet Basil in Scottsdale.
Lauren Cusimano

Keep your grilling game fresh with a hands-on International Grilling class happening at Sweet Basil from 9:30 a.m. to 12:30 p.m. on Tuesday, February 23. You’ll learn to make flavorful dishes from around the globe, including tandoori chicken with raita, beef shawarma with grilled salad, pork souvlaki with flatbread, yogurt turmeric fish, and eggplant hummus. The class costs $65. (Other classes happening this week will focus on Dutch oven recipes, easy desserts, Italian food, and cooking with Pinot Noir.)

Show biz is coming to Roosevelt Row at 7 p.m. on Wednesday night, February 24, as FilmBar at Pemberton presents an outdoor screening for The Greatest Showman, a 2017 musical inspired by the imaginings of P.T. Barnum. Themed costumes are encouraged, which means it’s a great excuse to rock your inner showman or circus attire, and sing along with cast members including Hugh Jackman, Michelle Williams, Zac Efron, and Zendaya. Tickets are $14. (They’re screening The Rocky Horror Picture Show at 9 p.m. on Saturday, February 27, complete with a costume contest and props for audience members.) 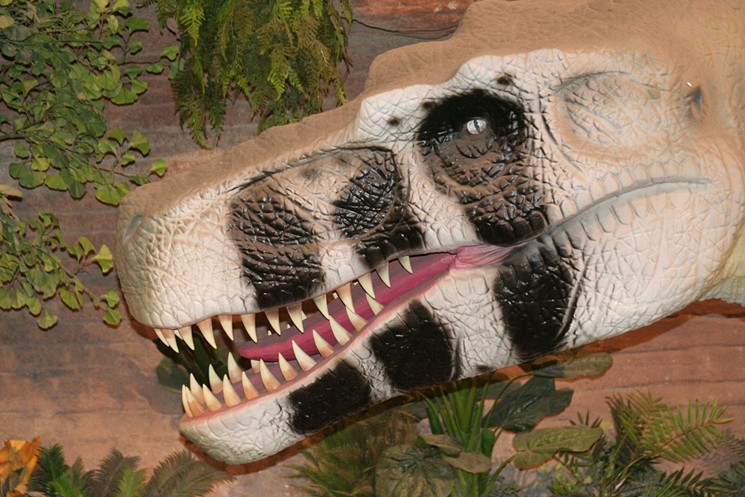 This dinosaur lives at a museum in Mesa.
Arizona Museum of Natural History

Embrace your nerdy side with a virtual exploration of new dinosaur-related science called National Geographic Live! Reimagining Dinosaurs. It’s being presented by Mesa Arts Center at 8 p.m. on Wednesday, February 24. Expect a robust conversation between paleontologists Nizar Ibrahim and Sebastián Rozadilla, whose areas of expertise include dinosaurs, prehistoric fish, and bird evolution. You’ll learn how the science of dinosaurs is evolving, even as you recall all those dinosaur legends you learned as a curious child. Tickets are $20. Enjoy a hands-on introduction to the pottery wheel from 6 to 8 p.m. on Saturday, February 27, when Sunshine Sunflower Studio presents its Sip & Spin class for the clay-curious among us who feel a little more inspired when they can add wine into the mix. The two-hour class, which is limited to six people, includes learning to prepare clay, plus centering, opening, and pulling up clay to form a vessel. You need to be at least 21 to participate, and the class costs $45. Materials are included, but you need to BYOB if you’re planning to sip behind the pottery wheel. The Musical Instrument Museum is highlighting the Arizona music scene with a weekend event called Celebrate Local, which runs from 9 a.m. to 5 p.m. on Saturday and Sunday, February 27 and 28. It’s designed for kids and families, and included with museum admission, which is $20 for adults, $15 for teens, $10 for children, and free for kids age 3 and under. Activities include crafts, an outdoor drumming circle, and pop-up performances of Persian classical music — which happen at specific times on both days.