Jacob Tyler Dunn
Just be sure to bring your billfold, as The Chuckbox is cash only.
Steakhouses, roadhouses, honky-tonks: They tend to tick the same boxes — Old West art, cowhides, hung-up Stetson hats, and maybe some neon signs for Shiner Bock. Acknowledging these commonalities should in no way be read as a complaint. Western-themed restaurants have fun features (the decor, the beer and whiskey) and oftentimes better food (steaks, barbecue, cowboy breakfasts). Here are 10 examples around town.

202 East University Drive, Tempe
The Chuckbox is older than nearly anything else in Tempe and does one thing quite well: charcoal-grilled burgers and chicken sandwiches. For decades, students, locals, and visitors have stepped up to this rustic little cabin for an affordable burger after perusing the menu, which is made to look like a wanted poster. There's no flat-top here, just the open flames of a mesquite charcoal grill that, when combined with the restaurant's special secret spices, makes for one great lunch. Just be sure to bring your billfold, as this place is cash only. 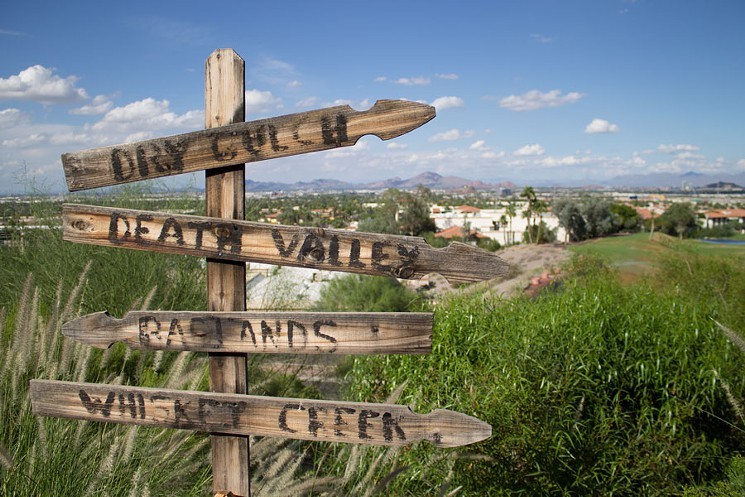 Enjoy a steak from on high at the Rustler's Rooste.
Sara Weber

8383 South 48th Street
Nestled in the South Mountain buttes, Rustler's Rooste is the premier place to bring folks who want to experience an old-time Arizona steakhouse vibe. It's family-friendly, there's a tin slide for the little rascals to play on (though adults are more than welcome to take a turn), and the general store inside has just enough cowboy kitsch to impress your Midwestern relatives who've never seen a glass scorpion paperweight before. Get duded up in your best Western duds, order up a frosty one, and listen to the live country music with an unrivaled view of the twinkling lights of civilization below. 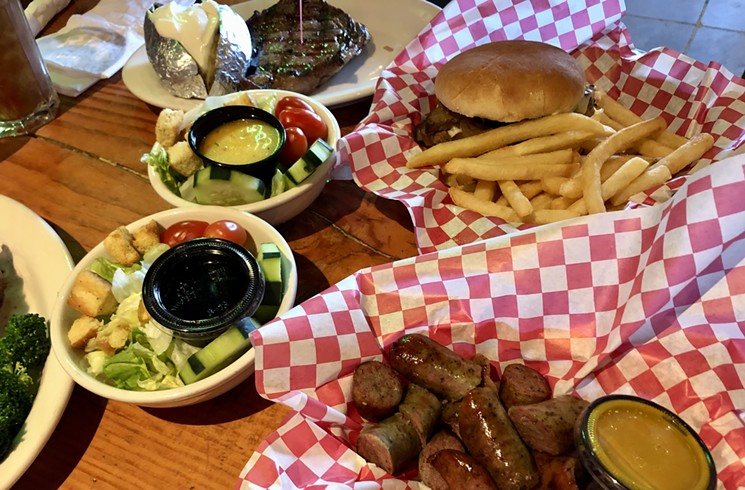 A spread from Buffalo Chip Saloon and Steakhouse.
Lauren Cusimano

6823 East Cave Creek Road, Cave Creek
Buffalo Chip Saloon and Steakhouse is a go-to in downtown Cave Creek, thanks to its always-raucous atmosphere. Aside from the multiple bars, dancing lessons, live music, bull riding, and Packers fans, Buffalo Chip has a pretty decent menu of chuckwagon-style eats. Barbecue options like pit-smoked beef brisket, bone-in smoked chicken, and my my my those barbecue sauce-glazed burnt ends can be ordered by the half or full pound. Sides like cowboy beans, honey butter biscuits, and Quickdraw Coleslaw come hot and ready. 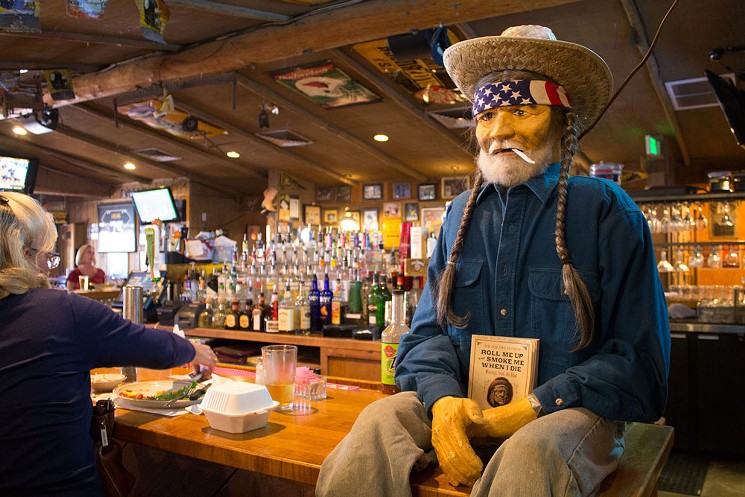 They have fun at Harold's Corral.
Sara Weber

6895 East Cave Creek Road, Cave Creek
Hook into Harold's Cave Creek Corral, and, sure, you'll find flatscreens at the bar, live music, a popcorn machine, and some big-time Steelers fans, but there’s also a formal dining room with a fireplace and a hell of a dinner menu. We like the rib-eye steak (a Harold’s favorite) but the marinated pork chops, Atlantic salmon, filet mignon, and half-racks of beef ribs are also worth a look. Harold’s is a Cave Creek landmark dating back to 1935 — a must-visit. 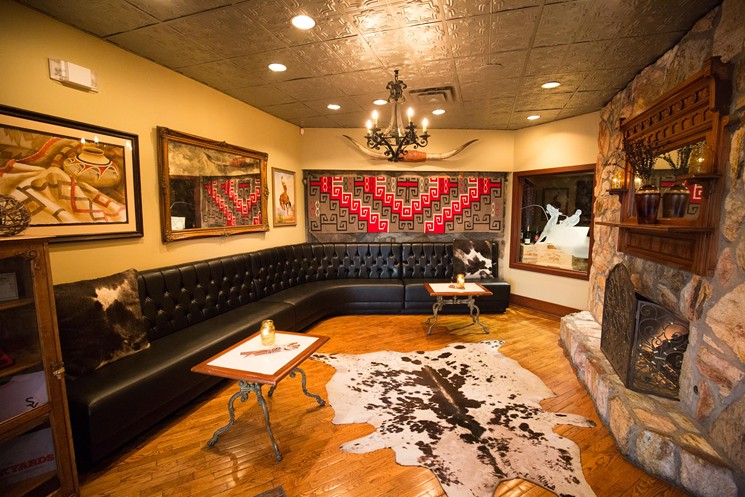 The Stockyards — one of our oldest, best, and most Arizonan restaurants.
Jacob Tyler Dunn

The Stockyards Restaurant and 1889 Saloon

5009 East Washington Street
When you're carrying a heavy title like "Arizona's original steakhouse" on your hip, you better be ready to fire it off. That's exactly what's done daily at The Stockyards Restaurant and 1889 Saloon. Around since 1947 on Washington Street, the Stockyards was once a go-to chow stop for cattlemen from the Tovrea Land and Cattle Co. and other prominent pioneers of early Phoenix. The classic restaurant has a reputation for serving New West cuisine — primarily, corn-fed, aged steaks, and prime rib — but today's menu hasn't diverted all that much from the original. Other specialties include Paloma Ranch calf fries, American bison meatloaf, the Arizona cut steak, and some beloved baking soda biscuits. And who could resist a whiskey in the 1889 Saloon, designed by Mrs. Cattle Baron herself, Helen Tovrea? Sit yourself down and have a seat, partner. 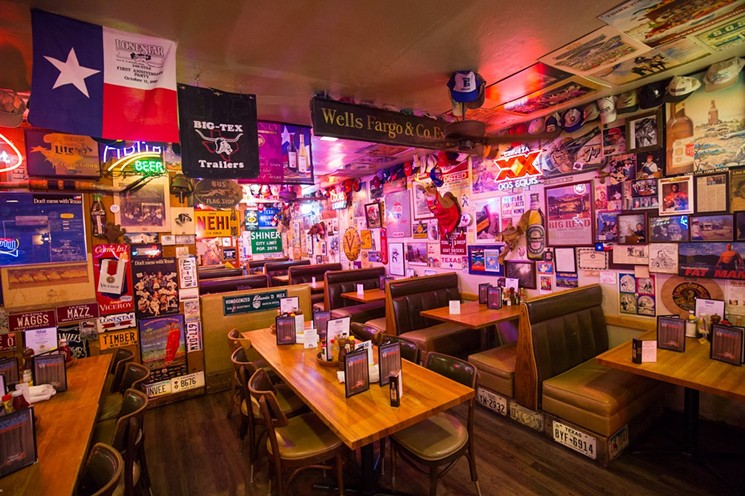 The interior of Texaz is something of a Phoenix attraction.
Jacob Tyler Dunn

6003 North 16th Street
Jutting out of the stucco plaza at 16th Street and Bethany Home Road since 1985, Texaz Grill is equal parts roadhouse cliche and serious steakhouse. Upon entering, allow your eyes to adjust as they wander over the dimly lit mounted trucker hats and road signs, framed photos of yesteryear diners, and the buzzing neon of beer logos. Regulars know their order — probably the fall-off-the-plate chicken fried steak, but maybe the barbecue ribs, fried catfish, or smoked prime rib. The bar is well-stocked, both with booze (they'll make just about any type of drink) and pretzels and peanuts to chew while you sip. Holidays are fun here too: We're big fans of the marinated black-eyed pea salad — or Texas Caviar — that's served on New Year's Day. 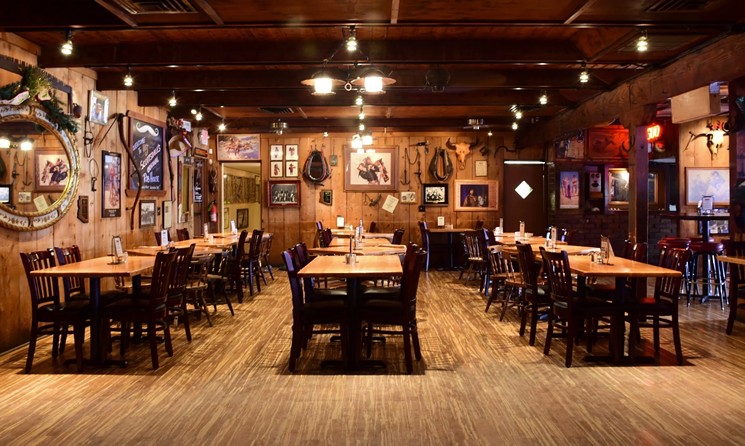 Handlebar J is a honky-tonk with a hell of a menu.
Handlebar J

7116 East Becker Lane, Scottsdale
Opened in 1966, Handlebar J is the kind of over-decorated honky-tonk we just love, and not just because there’s a full menu of barbecue, steaks, and sliders. The restaurant offers the must-try baby back pork ribs, as well as its bunkhouse fare like the Cowboy Burger, Gwen’s Fried Chicken, the Sundown Chopped salad, and honey-butter biscuits for the table. There’s usually live music, dancing, and plenty of general rowdiness to be found here at Scottsdale's original rib house. 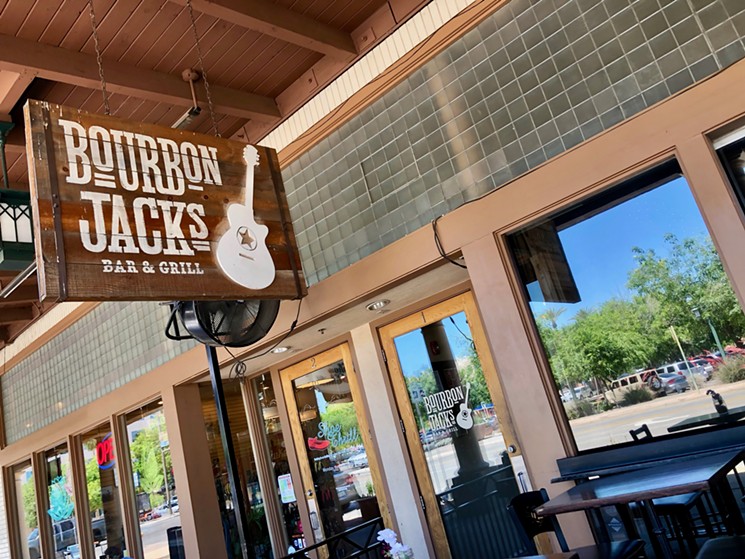 Be sure to head to Bourbon Jack’s for brunch.
Lauren Cusimano

11 West Boston Street, Chandler
There’s loads of historic charm at this Chandler joint, and it extends beyond the collection of vintage pictures and decor lining the walls. Bourbon Jack's is located in the Arrow Pharmacy building, which dates back to the days (1918) when many folks in the suburb rode horses to get around. For brunch, there's biscuits and gravy, chicken-fried steak, all-you-can-eat flapjacks, and the Cowboy Campfire Breakfast (eggs, bacon, beans, taters, and Texas Toast). Otherwise, belly up to a plate of pork chops or ribs, maybe even a Cowboy Chop Salad. And if you stop by on a night with live music, you might hear a local band performing a song or two by old-school country kings like Hank Williams. 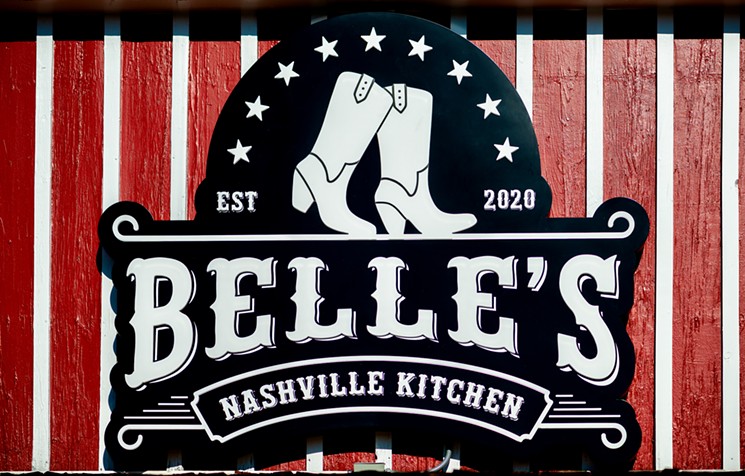 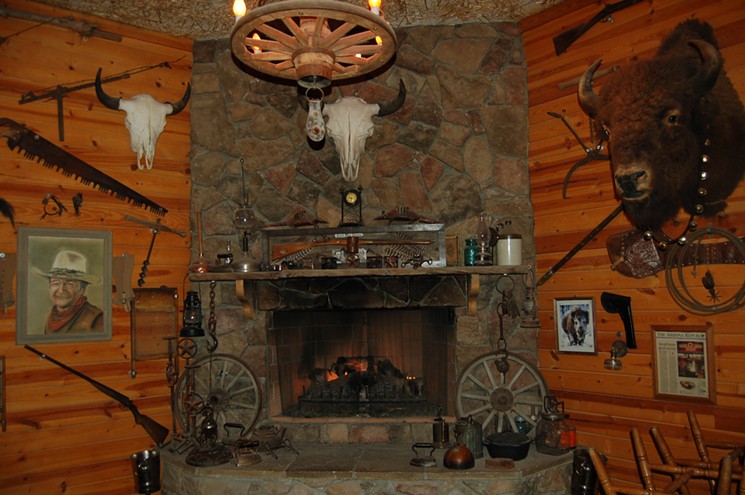 Visiting San Tan Flat is like hanging out at a cowboy camp.
New Times Archives

This Southeast Valley eatery and drinkery was made famous years ago due to its well-publicized fight with Pinal County officials about the legality of letting patrons dance. Thankfully, San Tan won that particular court kerfuffle, allowing anyone to kick up their heels as much as possible during gigs from local country and western groups performing throughout the week. If you're not in the mood to scoot your boots, there's other fun, like roasting marshmallows over campfires (you can buy a bag there for $3), or dining on tenderloin tips, the rib-eye, and The Duke burger.