May the 4th Be With You: Where to Celebrate Star Wars Day 2021 in Phoenix

Michelle Sasonov
Celebrate your love of Star Wars today around the Valley.
Looking for an excuse to bust out your Darth Vader costume? Feel free to do so today, padawan, as it happens to be Star Wars Day. Falling on May 4 each year (as in “May the fourth be with you”), the day offers geeks the chance to celebrate their love of the legendary space opera franchise, and bars, retailers, and other businesses throughout the Valley and around the world the chance to offer Star Wars-themed events and sales.

Here’s a look at what’s on tap for the 2021 edition of Star Wars Day in metro Phoenix.

If you’d like to re-enact the Boonta Eve Classic from The Phantom Menace (albeit with go-karts instead of pods), the Phoenix location of K1 Speed will offer a single race for $15 to anyone dressed up as a Star Wars characters. There are two caveats, though: It’s limited to characters from the films, TV shows, comics, and games only (i.e. no one from fan fiction) and additional races will cost the regular rate of $23.95. Hours are noon to 10 p.m.

What heading did the Millennium Falcon use to enter the Hoth asteroid field? How many languages does C-3PO speak? And what’s Jabba the Hutt’s full name? If you can easily come up with the answers to said questions (which are 271, more than 6 million, and Jabba Desilijic Tiure), lightspeed over to Thunderbird Lounge for its Star Wars Trivia night on Tuesday.

Participants can form teams (which can range in size from six people or more to just one person) pick a Star Wars-y team name, and compete for prizes. First place will nab you two tickets to Disneyland (home of the Star Wars: Galaxy's Edge attraction), second place earns you several Star Wars Lego sets, and third place gets you action figures and other swag. It’s free to participate. Signup is at 6 p.m. and the questions begin at 8 p.m. (space will be limited, so you’re encouraged to show up early).

Myke's will serve a special menu with Star Wars-themed selections like "Maize Windu" elote (made with queso Oaxaca, pickled red onions, jalapeno salsa, and corn mayo) and "Darth Tater" (a.k.a. potatoes topped with three kinds of cheese, garlic cream, guanciale, and rosemary). Other options include "I Yam the Senate" and "These Aren't the Droids You're Looking Four-Cheese Pizza.” It’s available from 4 to 8 p.m. May the puns be with you.

Fans can get three action figures of characters from The Mandalorian (Kuiil, Cara Dune, and IG-11) for $29.99 at this geek emporium in downtown Mesa, as well as a free Darth Vader promo trading card while supplies last. Details can be found here. They’re open from 11 a.m. to 6 p.m. 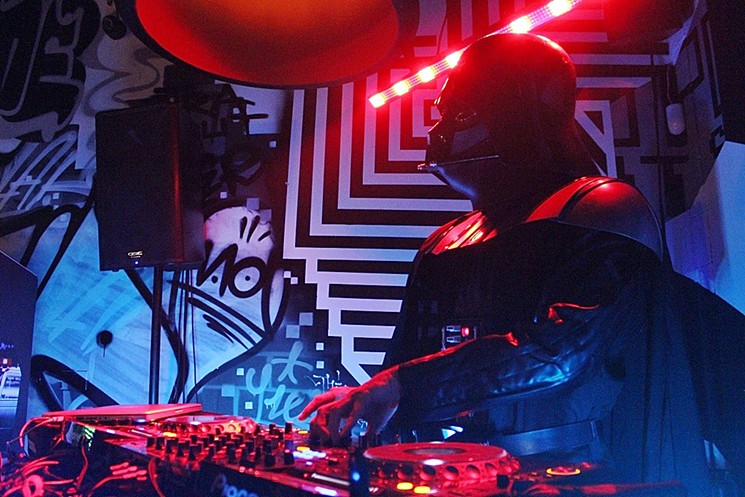 The Force will be strong with DJ Darth Vader behind the decks at Cobra Arcade Bar.
Michelle Sasonov

Cobra will host its annual “May the 4th Be With You” party on Tuesday night with DJ Darth Vader dropping intergalactic funk and other forceful beats on a crowd of Star Wars fans and cosplayers starting at 9 p.m. Themed drink specials and a costume contest for cash prizes are also promised. The party starts at 8 p.m. and there’s no cover.

Both of Bookmans’ locations in the Valley will conduct drawings, raffles, and Star Wars trivia contests throughout the day. The Mesa store will also have a “special edition space storytime” presented by the Drag Story Hour.  (Full details can be found here.) Location hours are from 9 a.m. to 8 p.m.

All scum and villainy are welcome to attend a night of Star Wars Bingo for prizes at the hall, which is being put on by the Scottsdale Women's Council of Realtors. Dinner will be served and a 50/50 raffle, silent auction, and “galactic cocktails” will also be offered. Registration is at 5:30 p.m. and the event starts at 6 p.m. Tickets are $35 per person.

The Lost Dutchman Rucking Club is planning a casual canal ruck (which involves people running with weights attached to themselves) starting from Spoke & Wheel. Participants will also build a personal lightsaber made from the cans of beer they’ll drink along the way. Star Wars costumes are encouraged but aren’t mandatory. The event starts at 8 p.m. and it's free to join. More information is available here.