Mahfam Moeeni-Alacron, Chef and Co-owner of Mingle + Graze, Is Now a Dame d'Escoffier

Front-of-house is slow, with a couple on the patio and a woman dining inside, but the back-of-house is busy prepping. Moeeni-Alacron sits near a laptop and a stack of papers that rest on a table near the register. If she were not being interviewed, one gets the sense she’d lend a hand washing dishes or placing orders.

“I do it with joy,” she says of her work around the kitchen. Even with a mask on, her smile shows in her eyes. It's the attitude that landed her a nomination and acceptance in April into the Phoenix Chapter of the Les Dames d’Escoffier, a professional society of women leaders in the fields of food, beverage, and hospitality.

Moeeni-Alacron, a founding member of Cherry Bombe (a biannual magazine and weekly podcast all about the female leaders of food), met Dame Emma Zimmerman, the co-owner of Hayden Flour Mills, at the Cherry Bombe Radio Tour in June 2019. They spent more time together when they met again at the James Beard Foundation's "Owning It" event. Impressed by Moeeni-Alacron's work, Zimmerman nominated her for the Les Dames d'Escoffier on March 10, 2021.

"It meant the world to me that she thought of me, a true honor," Moeeni-Alacron says.

But the nomination was the first step. She had to submit her resume and go through a vetting process. She officially became a Dame on April 5. To Moeeni-Alacron, being a Dame means she will have more opportunities to connect with a community of like-minded women in the food world. 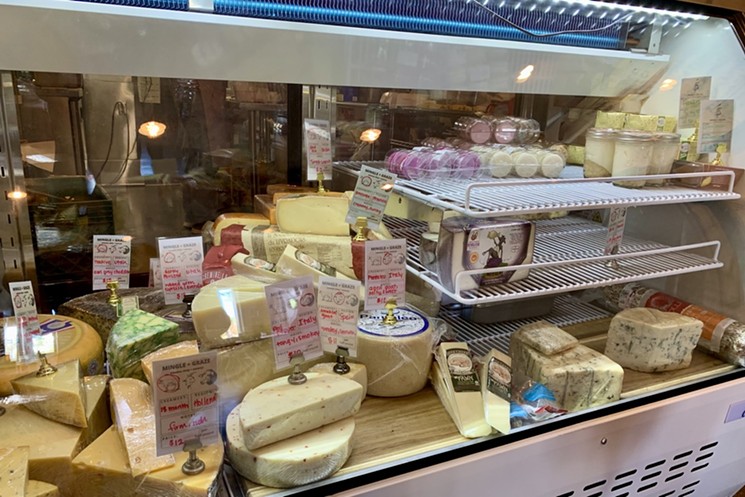 The Mingle + Graze cheese case.
Bahar Anooshahr
But it was no smooth road. Growing up in Jonesboro, Arkansas, she used to hide her Persian background.

Now, “I want to share my heritage,” she says. And she does with ingredients like barberries, pistachios, turmeric, cardamom, and figs interspersed in her recipes.

You walk the length of her small shop and restaurant to get to the cheese and dessert fridge. On the counter amid the jam jars and cracker boxes sits a photo of a spice shop in a Persian bazaar. Colorful mounds of spices are displayed in metal bowls in multiple rows.

Although the restaurant opens at 11 a.m., her husband and business partner, Cristobal Alacron, arrives at 8 a.m., followed by Moeeni-Alacron around 9 a.m. after dropping the kids off at school. They work on their catering, prep list, and wholesale orders for other restaurants (Sleepy Whale, Desert Monk Brewery, and Palette Collective Coffee & Co). She cooks during the rush, then sits at one of the tables with her laptop answering emails or conducting meetings.

As we speak, Alacron takes a phone order. They have four part-time staff members as well. Today, three work on making boxes of cheese. They are all trained on everything cheese from taste to wrapping to storing.

All this, Moeeni-Alacron says, is exactly what she wanted to do all her life.

“I always loved cooking with my mom. When we hosted parties, I’d skip hanging out with kids my age to be in the kitchen with mom. You know the Persian culture and the love of hosting.”

It took her until her junior year in college to realize she could make a career of it. The owner of the cafe where she worked mentioned culinary school. Once she heard about it, she gave her parents a presentation about why she should change her major from chemistry (pre-pharmacy).

Her Iranian parents tried to negotiate with her, but her mind was made up.

Moeeni-Alacron returned to Arizona (her birthplace) in 2005 to attend Arizona Culinary Institute with the goal of opening a restaurant.

For 15 years Moeeni-Alacron and her husband worked food and drink gigs around the Valley. Her final position was as a beer and wine buyer and head chef for Whole Foods’ marketing events. There she learned about retail, wine, craft beer, and really good cheeses.

Finally, she felt ready to start a small business selling marinated olives, which she was known for at the farmers’ market called Mahfam Artisanal Handcrafted Foods. She sold olives and received catering orders. This was in addition to working full-time, raising her son (5), and being pregnant with her daughter.

“I had to make sacrifices,” says Moeeni-Alacron. “I missed many of my son’s games and performances.” 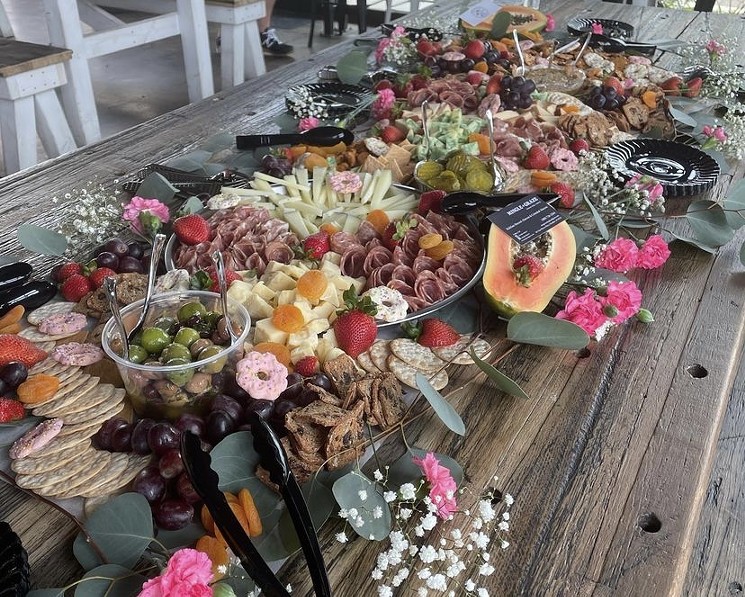 Grazing Table
Mingle + Graze
In 2017, after six years at Whole Foods, she decided to leave and focus fully on her business — a difficult decision, since they depended on two incomes to support their family.

“We had to budget and cut back on a lot of our wants,” says Moeeni-Alacron. This went on until only recently. The couple worked from a commercial kitchen until 2019 when she saw the current space in downtown Chandler.

She decided to commit and added retail and a small menu. Desserts come from local bakeries. Then came the really scary decision. To run the store effectively, Alacron, a manager at the Gilbert and Camelback Road locations of Snooze, would have to quit his job. They cut back to the bare minimum and paid the mortgage, utilities, and food. The rest went into the business.

“You know what, though? We had a vision, and zig-zagged to get there, but together we did it," says Moeeni-Alacron. "And every day we try to get better.”

Through word of mouth only, Mingle + Graze doubled its sales in a year, projecting a 200 percent increase in its 2020 revenue. Then came COVID. The customers started canceling events. They pivoted to comfort meals. It was no longer about profit but simply sales, an effective strategy. Luckily, they didn’t miss a month of rent or have to lay off staff.

Now, Mingle + Graze offers an expanded menu of cheeses and sandwiches. Some items are inspired by the couple’s Persian backgrounds, but they keep things simple, a carryover from the days when they had a strict budget.

“When you have a business, you can’t be flashy,” she says. She holds her palm up, gesturing toward the restaurant surrounding her. “This is my flash."