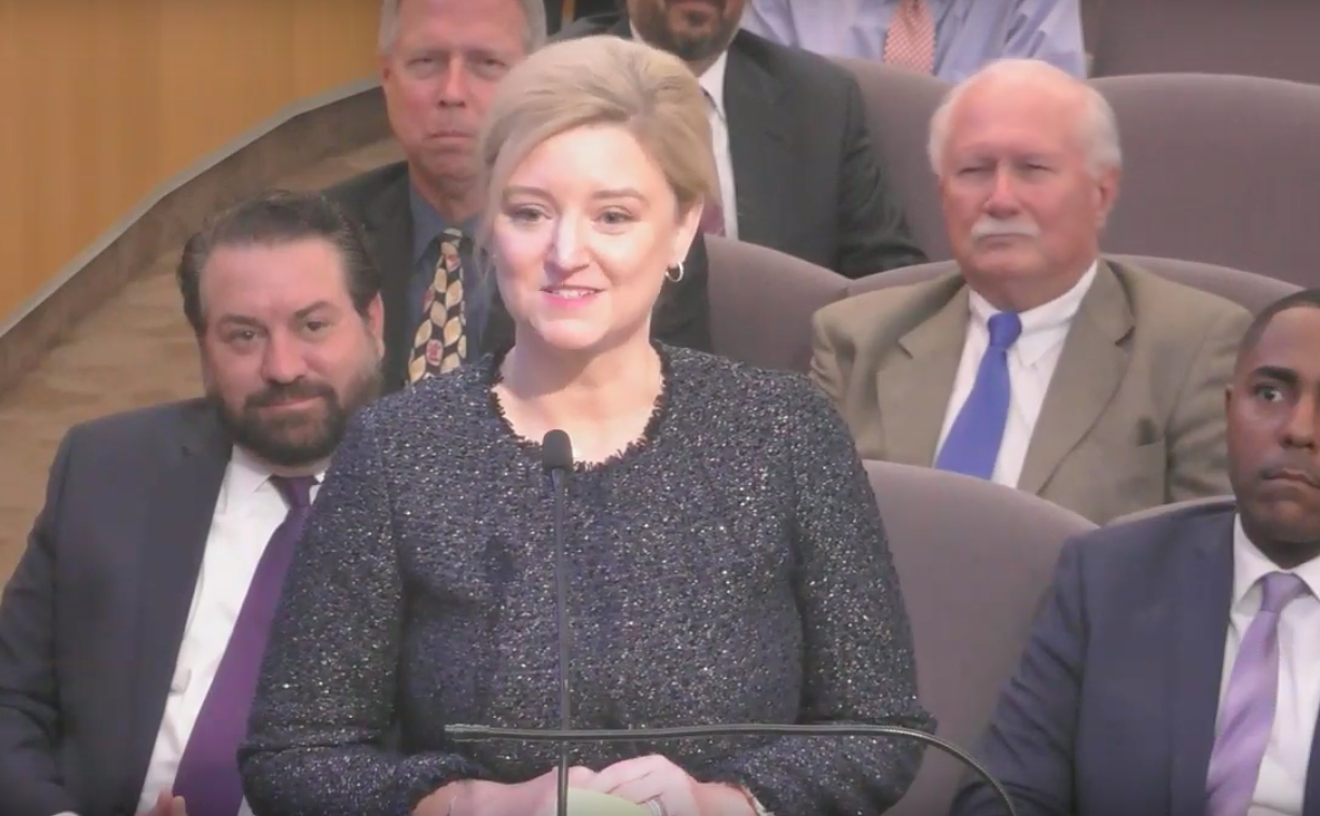 Via YouTube
Allister Adel speaking after she was unanimously approved as Maricopa County Attorney by the Board of Supervisors in 2019.
April Sponsel, the prosecutor who infamously told a grand jury that local anti-police brutality protesters were a criminal street gang, is alleging that Maricopa County Attorney Allister Adel knew about the plan and threw her "under the bus" after public outcry.

Last October, over a dozen protesters were charged with assisting a criminal street gang after prosecutors obtained a grand jury indictment. Transcripts of the proceedings show that Sponsel told the grand jury that the protesters were part of a fictitious "ACAB" — an acronym for the slogan "All Cops Are Bastards" — street gang, while a Phoenix police officer compared the protesters to gangs like Hells Angels. After reporting from ABC15 revealed that Sponsel misled the grand jury, Adel had the charges dismissed. Sponsel was placed on administrative leave while Adel attempted to distance herself from the case, telling 12News in February that she only had a "snippet" of information about the case and that her hospitalization last November impacted her ability to properly vet the case. The protesters are now suing Adel and Sponsel.

But in a new notice of claim — a procedural precursor to a lawsuit — that was submitted to Adel and the Maricopa County Attorney's Office (MCAO) on August 4, Sponsel claims that Adel was "fully aware of" the plan to charge the protesters as gang members and that she was used as a "scapegoat in order to blunt the criticism leveled by the news media" in an attempt to "absolve herself of any personal responsibility for bringing the charges and any politically damaging consequences of making that decision." Sponsel is accusing Adel of defamation, invasion of privacy, and interference of contract and wants $10 million to settle the case preemptively.

"These decisions were discussed, they were vetted, they were passed up the chain of command," said Tom Moring, an attorney with Jaburg Wilk, the law firm that is representing Sponsel. "The county attorney decided that someone had to be responsible for this change because there was no way to quietly dismiss these prosecutions."

Jennifer Liewer, a spokesperson for MCAO, did not respond to Phoenix New Times' request for comment on Sponsel's claim.

In her notice of claim, Sponsel provides her personal detailed account of how the controversial case played out. On October 17, 2020, the protesters who would later be charged as gang members were arrested. Sponsel was assigned to the case and "saw the profile of a criminal street gang." She got permission from her supervisors to charge the protesters with assisting a criminal street gang and asked the agency's division chief at the time, Vince Goddard, if Adel and Ken Vick, her chief deputy, approved of the charges. He allegedly said that they did. An "easily accessible" database had also been set up months earlier at Adel's request to track the status of arrested protesters.

During an October 21 meeting that Sponsel attended alongside "over 30 law enforcement officers," including FBI personnel and sergeants, lieutenants, commanders, and assistant chiefs with the Phoenix Police Department, she disclosed her intent to prosecute the protesters as gang members. Everyone at the meeting allegedly "agreed the charges were appropriate."

Sponsel claims that there is "no question that Ms. Adel was aware of the charges." Between October 20 and October 27 Sherry Leckrone, the former chief of the First Responders Bureau and Sponsel's supervisor, allegedly told Sponsel that she had recently attended a party at Adel's home where she discussed the plan to charge the protesters as gang members with Adel. During that conversation Adel didn't object to the charges.

After the grand jury indicted the protesters in late October, Sponsel attended a virtual meeting on October 30 that included a host of high-ranking staffers within the agency, including Vick, Leckrone, Goddard, and MCAO spokesperson Liewer. The case was again discussed. Only Ryan Green, the agency's division chief of training and appeals, objected to the charges and no one called for the charges to be dismissed.

Months later, after the case had been heavily scrutinized by the media, Sponsel and her supervisors were called into a meeting on February 12 to brief Adel and her executive team on the case. Sponsel was told the same day that the charges were being dismissed. Sponsel disagreed with the decision and asked her supervisors not to list her name on the dismissal paperwork, which they rebuffed by telling her that a refusal to do so would amount to insubordination.

Adel then began a "campaign borne of political self-interest to falsely blame Ms. Sponsel, and Ms. Sponsel alone" for controversial prosecutions, the notice of claim states. Sponsel cites a statement that Adel gave to ABC15 in which she claimed that prosecutors failed to properly vet the case. On March 2 Sponsel was placed on administrative leave for "purportedly violating unidentified MCAO policies and protocol" related to the protester case. To this day, Sponsel allegedly has "not yet been told" what she did wrong.

In May, Goddard and Leckrone, who were both in the chain-of-command that approved of the plan to prosecute the protesters as gang members, resigned from their posts at MCAO.

When asked if Sponsel stands by her false depiction of the protesters as gang members during the grand jury proceedings or regrets her handling of the case, Moring repeatedly defended her conduct.

"She did her job to the best of her ability," he said.