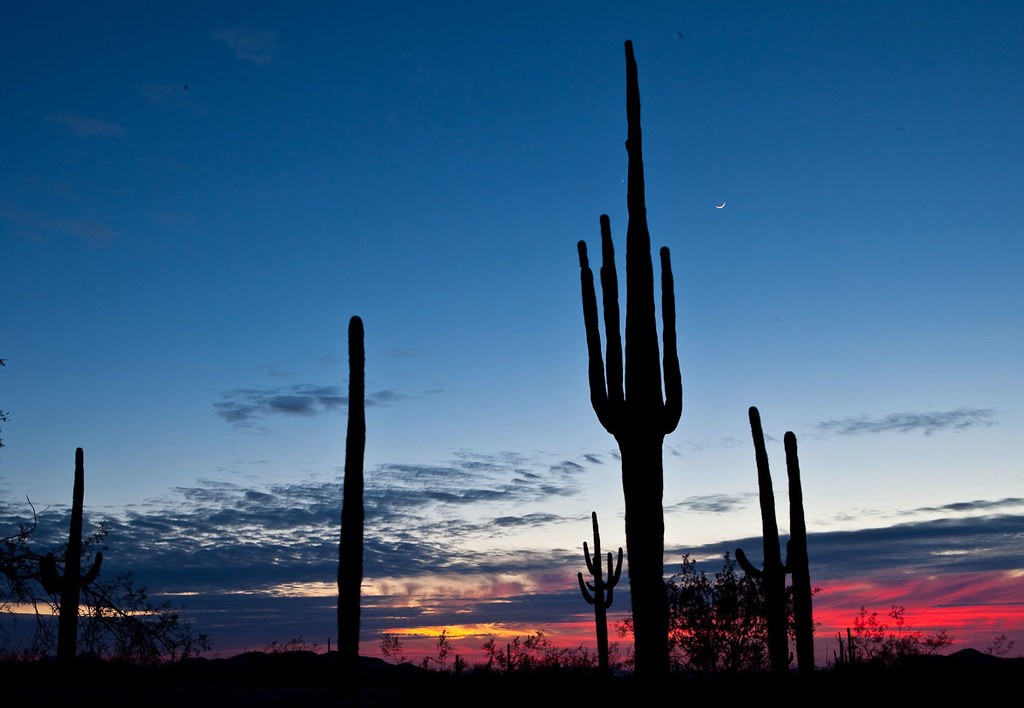 Bureau of Land Management
Arizona's Burning Man-inspired event is named for the saguaro cactus.
This year's Burning Man festival will once again be taking place virtually, rather than at Black Rock City in the Nevada desert, due to concerns about COVID-19. “We have had to adapt to the twists and turns of a global crisis, complex public health information, and the growing hope that we can start rebuilding our lives together soon,” a statement reads on the Burning Man website.

But the organizers of Saguaro Man, the Burning Man-style event held annually in the Arizona desert, recently announced that this year's gathering would go ahead as planned, taking place live and in-person October 13 to 17.

The formal announcement issued on August 6 indicates that the event will have “multiple COVID related precautions/restrictions, including PCR tests and vaccine requirements.” It also allows for the fact that public health conditions are in flux. “We have a rapidly changing and very fluid situation, so our plans today are based on where we are now, and where we hope we will be by October. As the situation evolves, plans can change.”

Even so, the decision has drawn criticism within the AZ Burners community, whose leaders put the event together.

Michael Oaks Wright, an artist with a medical background, responded by sharing COVID-19 statistics in an August 7 Facebook post. “I want it on record that I strongly denounce the decision,” he wrote. “Saguaro Man has a very good chance of being a super spreader [sic] event for Southern Arizona.”

The location for this year’s event is an 80-acre site near Willcox, in the southeastern region of Arizona. The land was purchased in recent years to serve as a permanent site for community events. Organizers hoped the first gathering there would be Saguaro Man 2020, but it wasn’t held last year due to the pandemic.

This year, the Arizona leadership team decided to proceed with Saguaro Man in October, although the gathering typically takes place in May. An April survey created by the COVID-19 response team asked AZ Burners to weigh in on vaccinations, masks, and other mitigation strategies. Survey materials indicated that results would “help to ascertain certain safety measures.”

Artist and AZ Burner Kristin Wesley with a pair of her Friendly Flower sculptures.
Lynn Trimble
Once the decision was announced, and critics weighed in, organizers continued to meet about moving forward with Saguaro Man 2021, according to Kristin Wesley, an AZ Burners region lead, whose role according to the AZ Burners website includes partnering with regional contacts to “develop and nurture the AZ Burners community.” (She’s best known to many for her Friendly Flowers installed along Grand Avenue; her art studio is just off Grand. She’s also been instrumental in organizing co-creators for a local AZ Burners event called IGNiGHT.)

It appears that concerns expressed after the announcement may have tempered the organizers’ resolve, and softened the approach of at least one AZ Burner who worries about possible COVID-19 impacts.

“As you can suspect their decision to hold this event in October is a sticky decision,” Wright told New Times via direct message on August 11. “One that is very decisive in our small tight knit community that I love and adore to pieces. Its [sic] important to me to do what I can to keep them safe at the same time to not light fires and burn bridges.”

Wesley’s tone was conciliatory, as well.

“There is so much up in the air,” Wesley wrote in an August 12 email to New Times. “Our leadership decision was ‘it’s not a NO yet,’ but we still have miles to go before we are a solid YES.” Wesley also acknowledged that other factors are at play. “It remains to be seen if it will take place as we have many things that need to fall into place before October including permits and adequate staffing.”

For those comparing Burning Man to Saguaro Man, she offers this perspective: “Unlike Burning Man, our infrastructure needs are significantly less that the ‘big burn’ in Nevada which affords us the ability to be flexible in our push to have the event.” According to Wesley, that push reflects the fact that Saguaro Man is a “critical and meaningful” aspect of the AZ Burners community, reflecting core values such as inclusion, radical self-reliance, and civic responsibility.

“We are very aware of the evolving landscape when it comes to COVID,” Wesley says, “and are clear that the event may still be canceled if conditions deteriorate.”