Fathom Events
Ben Platt stars as Evan Hansen in the 2021 film adaptation of the popular musical.
We did it, kids: We made it to fall. Autumn officially starts today, and the Phoenix event calendar is ramping up in response. This week, you can listen to local storytellers, watch Sun Devils football and Coyotes hockey, attend a celebration in honor of Mesa, and more.

The musical Dear Evan Hansen paused its Broadway run in March 2020, during the early days of COVID-19. But that won’t keep you from experiencing this touching tale, which considers the ripple effects of one teen’s tragedy and another teen’s response. Ben Platt, who originated the role of Evan Hansen on Broadway, stars in the film adaptation being released this month. Be among the first to see it at AMC Deer Valley 17 with IMAX, 3033 Agua Fria Freeway, on Thursday, September 23. Before the film, AMC will livestream a cast Q & A and featurette about the making of the movie. Tickets for the 5 p.m. event are $16.29. Dear Evan Hansen garnered the Tony Award for best musical in 2017, and Platt took home the award for best lead actor in a musical. Expect to get at least a little teary-eyed, but be prepared in case the film opens your emotional floodgates. This story is powerful stuff. Lynn Trimble

Look for Crisscross by Holly Roberts at Center Space inside Scottsdale Center for the Performing Arts.
Scottsdale Arts

For more than a year now, artists have been creating work amid a global pandemic that shaped the world around them in sometimes inexplicable ways. For many, the new normal of social isolation affected not only how they showed their art, but also how they made it. Now, you can see paintings, sculpture, mixed-media works, and other pieces that explore the experience of social isolation and its impacts. Titled “Socially Distanced,” it’s being presented by Scottsdale Arts Learning and Innovation in the Center Space at Scottsdale Center for the Performing Arts, 7380 East Second Street, Scottsdale. Check it out during the free opening reception from 6:30 to 8:30 p.m. on Friday, September 24. It’s a chance to see work by 17 artists based in Arizona, Colorado, and New Mexico — including several who’ll be there to chat with gallery-goers. The lineup of local artists includes Bill Dambrova, Fausto Fernandez, Monica Aissa Martinez, Patricia Sannit, and many more. Lynn Trimble

Social media may have fueled the rise of alter egos, but only a select few have the talent to turn their alter ego into a lively theatrical performance where humor sheds light on our shared humanity — over drinks. Steve Wilcox is living that dream, with a production called A Perfectly Pleasant Party With Parsley Periwinkle. The one-man show stars the mustached Wilcox as a charming bon vivant eager to share his tips for socializing in the age of social distancing. If you’re ready to get back out there, but finding it’s harder than it looks, you can turn to Parsley Periwinkle for some good-natured guidance. Upcoming performances at FilmBar, 815 North Second Street, include 6:30 and 7:30 p.m. shows on Friday and Saturday, September 24 and 25. Tickets are $30, and you can add a $10 beer flight from Arizona Wilderness Brewing Company if you like. Whether you show up in your finest velvet smoking jacket or vintage pearls and pumps is up to you. Lynn Trimble 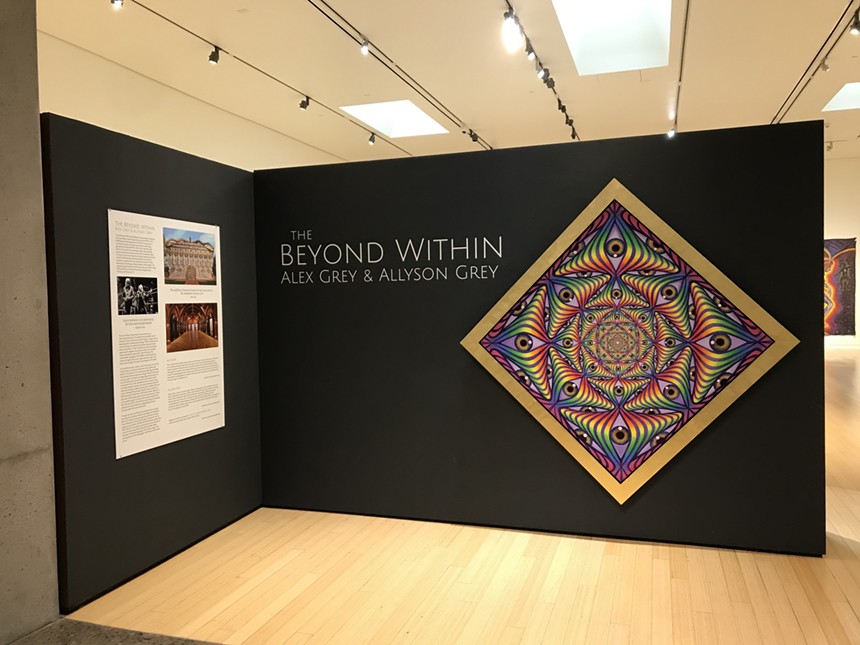 Check out "The Beyond Within" at MCAM during I Love Mesa Day.
Lynn Trimble

The city of Mesa decided to celebrate its essential workers and downtown businesses with a family-friendly event called I Love Mesa Day, where the lineup of free activities includes two free concerts at Mesa Amphitheatre and a farmers' market at Mesa Arts Center. Presented with the Downtown Mesa Association, the event is happening from 8 a.m. to 10 p.m. on Saturday, September 25. Look for live music, art, and other entertainment on Main Street between 11 a.m. and 10 p.m. The farmers' market runs from 8 a.m. to noon along the Center Street side of MAC. There’s even a kid zone, which will be open from 11 a.m. to 3 p.m. on Macdonald between Main Street and Pepper Place. And you can enjoy free admission at Mesa Contemporary Arts Museum (10 a.m. to 5 p.m.), as well as the i.d.e.a. Museum and the Arizona Museum of Natural History (both are open 9 a.m. to 5 p.m. that day). Bring nonperishable goods along if you want to donate those to United Food Bank, which will have boxes set up at the amphiteatre and these three museums. Lynn Trimble

Stand-up comic Kyle Kinane might be crass, depraved, and deeply personal, but he's never boring, even if he’s detailing his take on societal issues or the mundane aspects of his daily life. Whether it's on stage or on any of his five albums, including 2020’s Trampoline in a Ditch, Kinane segues between various topics in brilliant and hilarious fashion, like when condemnation of white privilege becomes a discussion of his beliefs about the supernatural. You can hear such similar subject matter when the comedian performs at Crescent Ballroom, 308 North Second Avenue, on Saturday, September 25. His sets are at 7 and 9 p.m. Tickets are $25 each. Benjamin Leatherman 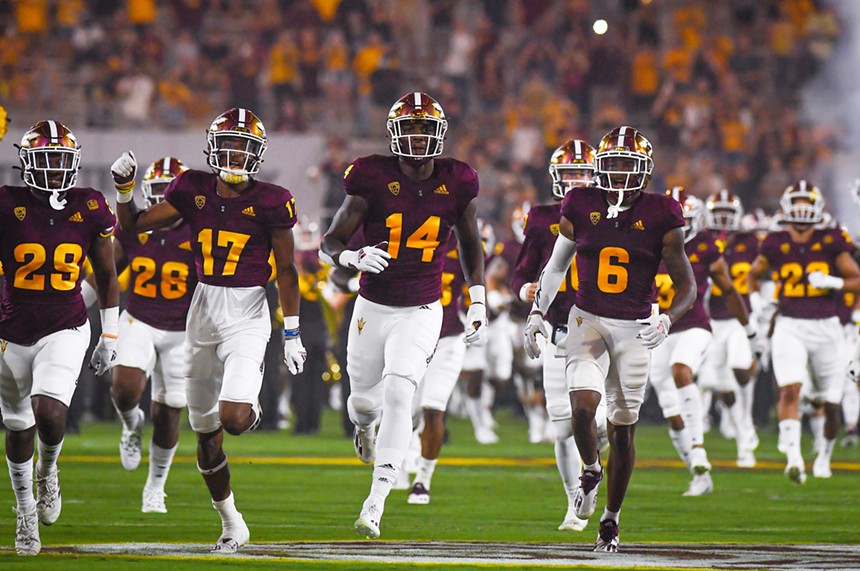 ASU's football team will take to the field against the University of Colorado this weekend.
Will Edmonds/Sun Devil Athletics

Arizona State University’s football squad can be its own worst enemy. In their recent loss to BYU, for instance, costly mistakes by the Sun Devils (including four turnovers and 17 penalties) and various offensive and defensive woes resulted in ASU’s first loss of the season. In short, head coach Herm Edwards will have plenty of problems to address (and hopefully fix) as Arizona State gets ready to face the University of Colorado in their first Pac-12 conference game on Saturday, September 25, at Sun Devil Stadium, 500 East Veterans Way in Tempe. The Buffaloes (1-2) are coming off back-to-back losses and have numerous issues of their own, but ASU (2-1) will have to get their passing game back on track, keep the defensive gaffes to a minimum, and focus on beating their opponents instead of themselves on the field. Kickoff is at 7:30 p.m. Tickets start at $20. Benjamin Leatherman

The Nile Theater in Mesa.
Evolve Public Relations and Marketing

FilmBazaar at the Nile: The Toxic Avenger

There’s nothing like a good “bad” movie, and 1984's schlocky classic The Toxic Avenger is one of the best of the worst. The infamously low-budget splatterfest, co-directed by the legendary Lloyd Kaufman of Troma Entertainment, boasts a ridiculous plot (a 98-pound weakling named Melvin becomes the titular mutant after falling into toxic waste), corny dialogue, and bargain-basement production values. It’s also quite watchable, owing to its so-bad-it’s-good aesthetic. You can catch the movie on the big screen at The Nile Theater, 105 West Main Street in Mesa, on Sunday, September 26, during the launch of FilmBazaar at the Nile. The monthly event is a collaboration between the venue and downtown Phoenix’s FilmBar and features a record/movie swap from noon to 3 p.m. followed by the screening of a cult classic or fan-favorite flick. Admission is $5. Benjamin Leatherman 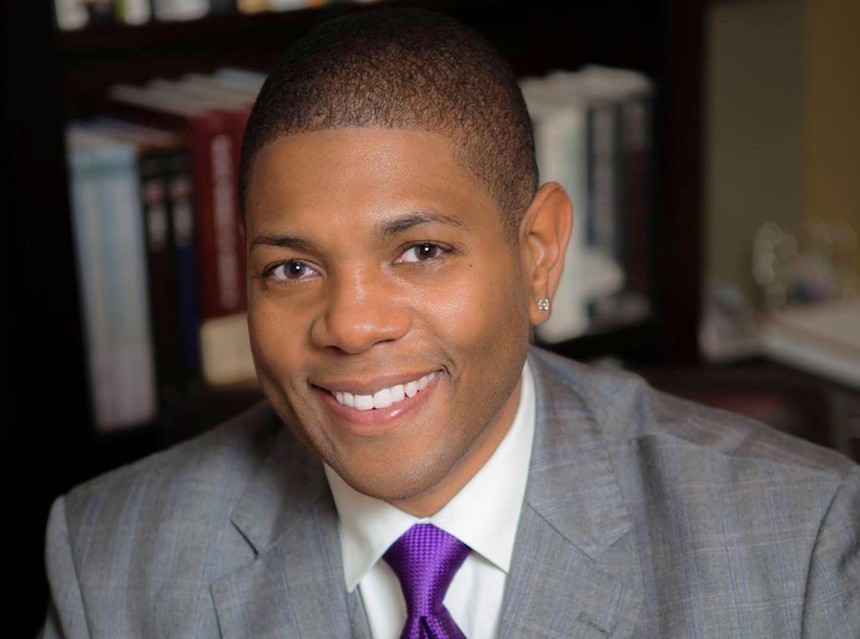 Arizona Humanities and Glendale Public Library are tackling the topic of mass shootings and gun violence in "The Other Epidemic: Gun Violence and Mass Shootings in America," which will feature Matthew Whitaker, founder of the ASU Center for the Study of Race and Democracy. It’s happening from 6 to 7:30 p.m. on Monday, September 27, at Glendale Public Library, 5959 West Brown Street, Glendale. Whitaker plans to address the history, evolution, and distinct nature of gun culture in America, as well as possible solutions to its dangerous impacts — exploring topics such as the role of mental illness, toxic masculinity, and racism in gun violence. He’ll consider whether Americans can reduce gun culture and support the Second Amendment, why so few solutions to gun violence exist even though a majority of Americans oppose it, and whether gun ownership is a civil rights issue or a human rights issue. Admission is free. Lynn Trimble

The Arizona Coyotes are in what’s commonly known in the sports world as a “rebuilding phase.” After failing to make the NHL playoffs last season, despite posting a 56-24 record, the roster has been cleared to make room for a crop of recently traded and up-and-coming prospects, including goalie Carter Hutton, defenseman Victor Söderström, and winger Dylan Guenther. They’ll hopefully gel with Jakob Chychrun, Phil Kessel, and Arizona’s core of players to lay the groundwork for the future. The Coyotes’ first test will come when they open the preseason against the Los Angeles Kings on Monday, September 27, at Gila River Arena, 9400 West Maryland Avenue in Glendale. The puck drops at 7 p.m. Tickets are $12 to $99.50. Benjamin Leatherman

They’ve got some big shoes to fill over at Phoenix Theatre Company, where Michael Barnard is directing a fresh production of the classic Broadway musical Camelot. When it opened in 1960, the cast included Richard Burton as King Arthur, Julie Andrews as Guenevere, and Robert Goulet as Sir Lancelot. Phoenix Theatre is presenting a “play within a play” take on Camelot, with a cast that includes Toby Yatso as King Arthur, Kate Cook as Guenevere, and James D. Gish as Sir Lancelot. Based on a book by T.H. White, the musical was created by the renowned musical theater team of Alan Jay Lerner and Frederick Loewe, whose other collaborations included My Fair Lady. There’s a 7:30 p.m. performance at Phoenix Theatre Company, 1825 North Central Avenue, on Tuesday, September 28. Ticket prices vary. Resist the urge to go dressed as one of the Knights of the Round Table; that’s best left to the professionals. Lynn Trimble 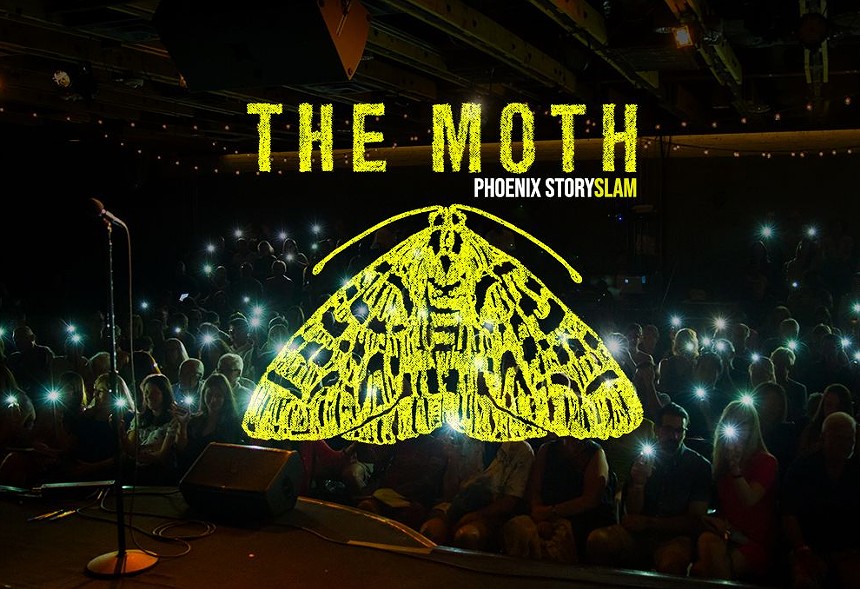 By now, you’re surely tired of trying to tell your best stories via Zoom calls, where it’s really tough to strike the right rhythm and elicit the kind of listener reaction you’re going for, whether it’s uproarious laughter or abject horror. Try taking your five-minute stories to Crescent Ballroom, 308 North Second Avenue, for The Moth: Phoenix Storyslam on Wednesday, September 29. Tickets are $15 in advance and you need to be at least 21 to attend. Doors open at 7 p.m. and the show starts at 8 p.m. The theme for this month’s open-mic storytelling competition is gatherings, as in seances, weddings, rallies, speed dating, spelling bees, gallery openings, high school reunions, and more. If you’re not up for sharing a story, just do the audience thing instead. Lynn Trimble