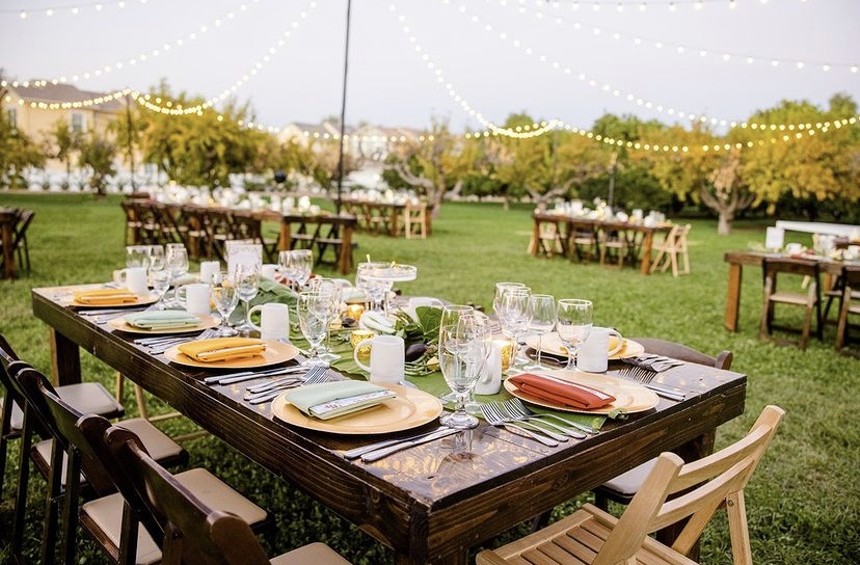 Last October, Tom and Lin Baumbach, the husband-and-wife duo behind Phoenix-based TLC Catering, had the notion to start a traveling supper club. Covid was the main impetus: There were no events for their eight-year-old company to cater due to the pandemic.

"When people stopped having parties," says Lin, "we decided to throw our own."

They planned their initial dinner outdoors at Agritopia Farms and only sold tables of eight to coworkers, clients, and friends. "It was basically, come enjoy some good food with us," says Lin.

The dinner's success led to a second one in November and a third in December. In January, The TLC eXperience was formally born. After a summer hiatus, it was restarted for the fall season with Chef Tom’s Birthday Dinner on September 19. The next one's a farm-to-table feast at Agritopia in November.


Planning fine-dining events wasn't a total stretch for the pair. Each has about 20 years of food and service experience. Lin’s three years at the Phoenician solidified her love of event planning. Tom previously worked in the fine-dining world at the now-closed Marco Polo Supper Club on East Camelback Road.

Most of the TLC eXperience dinners are cooked by Tom and his team, though he occasionally collaborates with other chefs like Brett Vibber (Cartwright's, WILD Arizona Cuisine) and bartender Danielle Goldtooth. He says he wanted TLC eXperience dinners to have a luxurious, savoir-faire New York style to them. Tom and Lin scout interesting locations in and around Phoenix, create elegant setups, and offer a multiple-course dinner with beverage pairings and entertainment.

So, how does this modern-day supper club work?

You purchase a ticket for a single dinner or a membership for multiple dinners. Let them know if you have any dietary requirements. A week before the dinner, Lin sends an email detailing the event, the address (if at a private residence), dress code, parking, and any other pertinent information. Then you show up, enjoy good food, and meet new people. The food is always seasonal and sourced locally.

Miso-seared black cod over Krispy rice, unagi sauce, and candied Fresno chili.
TLC eXperience
Some of the venues they've used in the past include Agritopia Farm, The Croft Downtown, Hagen Farm orange grove, Rhiba Farms, the Vista in Rio Verde, as well as private residences.

The couple has been inspired to see how people connect over the dinners. Members started to form friendships. “They looked forward to seeing each other at the next event,” Lin says. “That’s what makes our events special.”

For more information about upcoming dinners or collaborations, follow The TLC eXperience on Instagram or visit its website. They're still catering through TLC, too, if you're ready to start having parties again.