Magic Sword is scheduled to perform on Tuesday, October 5, at The Van Buren.
Joyful Noise Recordings
This week, your concert options in metro Phoenix include being transported to fantastical synth-rock worlds by costumed synth-rock band Magic Sword or back to the ‘90s with TLC. You can also partake in the sweet country harmonies of Midland, roll into Mesa Amphitheatre for an evening of stoner-friendly jams from Dirty Heads and Sublime With Rome, or rock out with Crobot.

Read on for more details about these gigs or check out Phoenix New Times' online concert calendar. Keep in mind, though, that the Delta variant of COVID-19 is a growing danger right now and multiple local venues have started requiring proof of vaccinations or a recent negative test result to attend shows. More info can be found on the ticketing sites for each gig.

TORRES at The Rebel Lounge

Mackenzie Scott went to work on the latest TORRES album last year amid the throes of the global lockdown. She admits the timeline affected the music she created during the process, but maybe not in the way you’d expect. Rather than capture the confusion and angst of the moment, she took a different route to listeners’ hearts. The latest TORRES album is titled Thirstier and it’s a heartwarming glimpse of an artist who is wholly grateful for the wins in her personal and professional life. Thirstier, which was released over the summer on Merge Records, is a chronicle of this moment in Scott’s personal timeline, but its peak optimism and expressions of joy burst through so that anyone not living her life can appreciate and connect to the songs. Scott, who records and performs as TORRES, a tribute to her grandfather’s surname, will perform at The Rebel Lounge, 2303 East Indian Road, on Monday, October 4. Local indie act MRCH opens the 8 p.m. show. Admission is $18. Jesse Sendejas Jr.


Magic Sword and Avatar at The Van Buren

Magic Sword is a synth-rock band based in Boise whose members dress as space knights from a galaxy far, far away. It’s the kind of high-fidelity synth-rock that embodies everything glorious about 1980s epic science-fiction movies. Sound-wise, think Wendy Carlos’s work for Tron, Tangerine Dream’s soundscapes for The Keep, and Mike Moran’s score to Time Bandits. The band’s members keep their identities secret, but there’s nothing alienating about their presence.

Concert-goers are encouraged to join the fun, with merch like light swords on offer. Yes, the theatrics are a gimmick, and so, perhaps, is the retro synth sound of the music. But in an era when many bands only go halfway with a gimmick, Magic Sword commits to the whole experience, which is reflected in its unusual, powerful, and unforgettable shows. They’re currently supporting Avatar on the Swedish heavy metal band’s Going Hunting tour, which comes to The Van Buren, 401 West Van Buren, at 7:30 p.m. on Tuesday, October 5. Tallah will also perform. Tickets are $29 to $32. Tom Murphy

TLC could easily become a rote nostalgia act coasting on their success in the ’90s, but, to their credit, they’ve been performing compelling sets filled with record-setting hits alongside newer songs that could have been just as big if they'd been released during the group's prime. That said, theirs is a damn great classic catalog worth celebrating, and T-Boz and Chilli are hitting the road to commemorate the album that cemented their legendary status, CrazySexyCool.

The timing is a bit odd, as the album's next landmark anniversary — its 30th — is still three years away. Still, if ever there was a time to dispense with formalities and celebrate for the hell of it, it would be after a year-and-a-half of pandemic-induced uncertainty. If "Waterfalls" and "Red Light Special" don't offer enough of a nostalgic comfort boost, Bone Thugs-N-Harmony will open the show to round out the '90s flashbacks. Both bands will perform on Wednesday, October 6, at Mesa Amphitheatre, 263 North Center Street. The show starts at 6:45 p.m. General admission is $49.50 and reserved seats are $75 to $99.75. Celia Almeida

Crobot are everything right about hard rock. The bearded group – whose self-described sound is “Dirty. Groove. Rock.” – definitely have been in demand on the festival and touring circuit, including opening for metal acts like Anthrax and Black Label Society. (Motörhead even tapped the Pennsylvania band to perform on their Motörboat cruise, back when the legendary band were still around.) Crobot feel just as comfortable in small clubs as they do in front of 20,000 in the blazing sun of a festival crowd, so their performance at Pub Rock Live on Wednesday, October 6, should be a rollicking affair. Weapon of Pride, Tmpl, and Jupiter Cyclops open the 7:30 p.m. gig. Tickets are $14 to $16. Amy Harris

Chandler Center for the Arts

Clint Black at Chandler Center for the Arts

Hailing from Long Beach, New Jersey, by way of Kirby, Texas, Clint Black is coming back to the Valley for some boot-scootin’ fun. The silk smooth baritone took his inspiration from the likes of Waylon Jennings, George Strait, and Willie Nelson, so it comes as no surprise that Black was a fixture on the country music charts in the ’90s and early 2000s. Black’s style is a far cry from the bro-country pop that seems to be the choice de jour nowadays, opting to sing a more traditional brand of country filled with lonely nights, ruined relationships and the occasional beer. Touring in support of his most recent album, 2020’s Out of Sane, Black will amble into Chandler Center for the Arts, 250 North Arizona Avenue in Chandler, on Wednesday, October 6, for a 7 p.m. performance. Tickets are $48 to $78. Nicholas Bostick

While they only emerged in 2016, Midland has made quite the impression on the music and fashion community alike with Vogue calling the band “heartthrobs and fashion risk-takers” due to their preference for wearing suits similar to the Nudie suits worn by Porter Wagoner and Roy Rogers. The unique brand of country harmony created by the trio of vocalists/guitarists Mark Wystrach Jess Carson and Cameron Duddy also impresses. Midland’s latest release, the five-song EP The Last Resort, came out over the summer and they’re scheduled to perform on Thursday, October 7, at Arizona Federal Theatre, 400 West Washington Street. Country musician Hailey Whitters is the opening act for the 7:30 p.m. concert. Tickets are $39.50-$49.50. David Fletcher

Earlier this year, metalcore pioneers August Burns Red celebrated the 10th anniversary of their fourth studio album Leveler with a live-stream performance of the entire record. The Pennsylvania rockers also re-recorded it with alternate tunings, new solos, and guest appearances – including vocals from Fit For A King’s Ryan Kirby and a guitar solo from Periphery’s Misha Mansoor. But live music is back, and the Pennsylvania quintet has returned to the road, meaning fans of the two-time Grammy-nominated outfit will have a chance to see them at Tempe’s Marquee Theatre, 730 North Mill Avenue on Wednesday, October 6. Doors are at 6:30 p.m. and Silentplanet, Erra, and Like Moths to Flames open. Tickets are $27.50. Matthew Keever 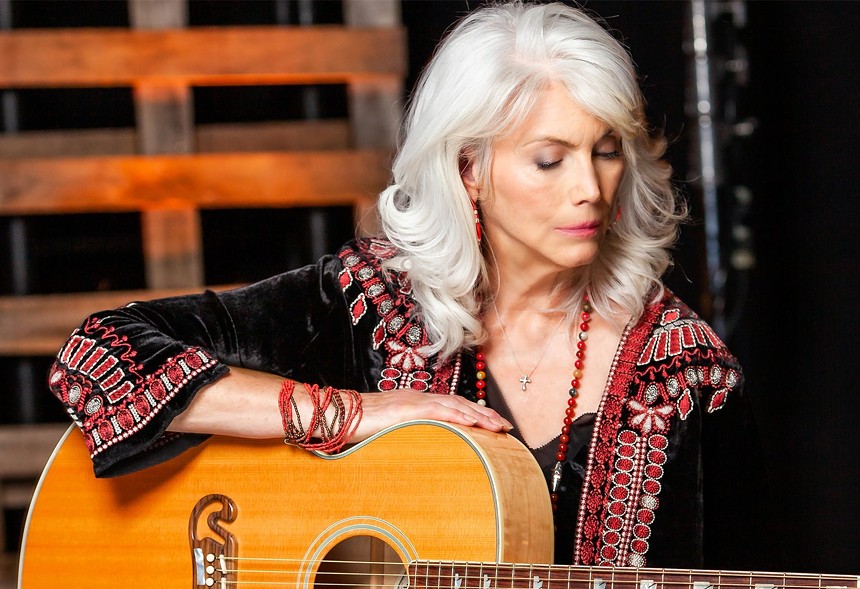 Emmylou Harris is as much a history project as she is a legendary folk and country singer/songwriter. From her liaison with the late Gram Parsons to her work with everyone from Dolly Parton to Bob Dylan to her political activism, Harris has been one of the most consistent and intriguing figures in music. Blessed with a perfect voice, Harris is also a seminal songwriter. Basically, she's unfairly talented, and she's been spreading that talent around for the better part of four decades. Whether it's her 1975 sophomore effort, Pieces of the Sky, or something as recent as this year’s Ramble in Music City, her recently released live album with acoustic band The Nash Ramblers, the quality of Harris' material is staggering. The Ikeda Theater at Mesa Arts Center, 1 East Main Street, will host her latest performance at 7:30 p.m. on Thursday, October 7. Admission is $38 to $128. Darryl Smyers

Dirty Heads and Sublime with Rome at Mesa Amphitheatre

Reggae/ska punks and potheads, rejoice! The High and Mighty tour featuring SoCal natives Sublime with Rome, Dirty Heads, and HIRIE — a.k.a. your Holy Grail lineup — is rolling into town this week for a performance at Mesa Amphithere, 263 North Center Street, on Thursday, October 7. If you’re unsure about attending, ask yourself, “WWBND?” (What would Bradley Nowell do?)

Nowell, along with bassist Eric Wilson and drummer Bud Gaugh founded Sublime back in the late 1980s in Long Beach, California, where the trio developed a unique sound that we now know and love, a masterful blending of ska and punk. Sadly, Nowell struggled with addiction and died from a heroin overdose in 1996, resulting in the group’s disbanding after releasing just three studio albums. Their final, self-titled album cemented Sublime’s place in music history with massive hits such as “What I Got,” “Santeria” and “Wrong Way,” which still fill radio waves today. Over three decades and one lawsuit later, Sublime lives on under the moniker Sublime With Rome, fronted by the eponymous Rome Ramirez on vocals and guitar, Carlos Verdugo on drums, and original Sublime member Wilson. Tickets for the 5:30 p.m. show are $50. Chelsey Norris