If QAnon’s grip on the Arizona GOP wasn’t clear already, Ron Watkins made it so last week, when the Q figurehead announced that he is running for Congress in Arizona.

Watkins’ candidacy is far-fetched, to put it lightly; although he’s built a major following online, he has never held any kind of elected office, and it’s not clear if he’s ever lived in the state. But his campaign does appear to draw on local inspiration — from Jeff Durbin, an extremist pastor in Mesa who has built his church into a sprawling media organization and national anti-abortion lobbying group.

In Watkins’ initial video announcing his bid to unseat Democrat Tom O'Halleran (“the dirtiest Democrat in the D.C. swamp,” Watkins said), he cited a recent sermon that Durbin gave at Apologia Church in Mesa.

Durbin convinced him, Watkins said, “to double down with God as my compass to take this fight to the swamp of Washington D.C.”

A former karate champion, Durbin has been cultivating influence nationwide over the past decade from Mesa. The media arm of the church, Apologia Studios, which Durbin founded in 2015, has hundreds of thousands of subscribers and millions of views on YouTube, where it produces daily, far-right political content (and a late-night talk show).

Durbin also runs “End Abortion Now,” an anti-abortion group. In an email to Phoenix New Times, Durbin writes that he has “trained” hundreds of churches nationwide to lobby against abortions. The organization, registered with Arizona as a Christian ministry, has become a major player in the national abortion “abolition” movement and is responsible for many local protests at abortion clinics. 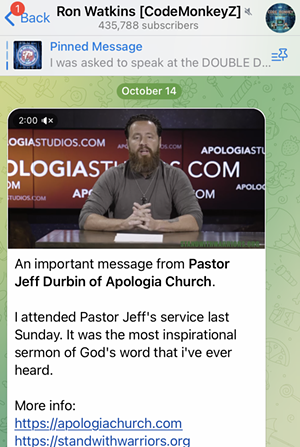 Telegram
He also occasionally has drawn national headlines for some of his most extremist moves — calling for women to be executed for abortions, for instance, and refusing to close his church’s doors even in the early days of the pandemic. (Durbin confirmed to New Times that he believes that women who get abortions should be executed, although clarified that he “would not trust our current judicial system” to mete out the punishment, because it “has led to so many to be falsely accused and incarcerated.”)

It seems that Watkins discovered Apologia Church, which Durbin says is Reformed Baptist, here in Arizona. For years, Watkins, an American, was living abroad — in the Philippines, and then Japan. But he has been hanging around Phoenix for the past several weeks, meeting with Kari Lake and petitioning, in vain, for a meeting with Attorney General Mark Brnovich, who so far has snubbed him.

Durbin distanced himself from Watkins, however, when New Times inquired about his candidacy. Although Watkins has been attending sermons, Durbin says, “he is not a member of Apologia Church,” and, furthermore, the church, as a practice, would not endorse political candidates. As for QAnon, Durbin calls the movement “destructive and embarrassing.”

“If the rumors about his involvement with Q were true and verified by us, we would confront that with him,” he tells New Times.


Watkins’ association with QAnon is hardly a rumor, however. For years, he ran the often-extremist message board 8chan (now rebranded as "8kun") alongside his father, Jim Watkins, who still owns the site. Watkins and his father are believed by some to have posted the initial messages from “Q” on the forum, which are central to the QAnon conspiracy theory. Watkins announced his official departure from 8chan last November, though some experts doubted that he was actually ending his role there, and his current involvement remains unclear.

Watkins told New Times in a phone message that he is "not involved in that project." He denied his association with QAnon, claiming "zero involvement" with the conspiracy. But over the past few years, he and his father have embraced their status as celebrities within the movement. Alongside various Arizona elected officials, Watkins will speak at a QAnon conference in Las Vegas this weekend.

And, so far, Watkins appears to be serious about his candidacy, claiming to the Arizona Republic that he has an address in Sedona and that he has vague (and so far unproved) family ties to Arizona. “I have a strong chance to win out there,” he said.