What makes a great eating experience? It could be a tasting menu extravaganza or cinematic omakase, sure. More often, though, it's a late-night stop at a taco truck, a simple diner breakfast, or a meal that invokes remembered people, places, good times, and traditions.

On a recent Saturday, the popup, which Hope Peshlakai holds every few weeks, was humming. A whole crew of young cooks, cashiers, and expediters bustled in a cordoned section of Main Street in downtown Mesa. Most were members of Peshlakai's family: husband and kids (she has six).

A grill so long it needs two propane tanks sizzled with hand-shaped beef patties, marinated chicken, and pineapple rings. Smoke plumed. Heads of pedestrians swiveled. Many then detoured to order before shuffling away to wait for food. Hope passed out Navajo burgers, sandwiches, plain frybread, and dessert frybread, laughing, directing, as joyful as the pink streak in her hair, maestro of this roadside ballet.

Aaron Peshalakai, Hope's husband, busied himself at the long grill, tonging and flipping meat for frybread burgers and sandwiches.

"He's my right hand," Hope says. "He's been doing this so long that I don't even have to tell him what to do. He just goes and does it."

Hope learned her frybread recipe from her grandmother. She makes it deeply browned, with a hearty chew; it takes some mild chomping and tearing to eat. When Hope cooks, she channels more than the present. "Tastes and smells always bring me back to a certain time in life, and I feel like that's my way of sharing my culture, my love for kids, my family," she says.

Earlier this year, Phoenix New Times reported that Hope was planning to open a brick-and-mortar in Mesa. She recently signed a lease for 144 South Mesa Drive, where construction on a restaurant will begin soon. 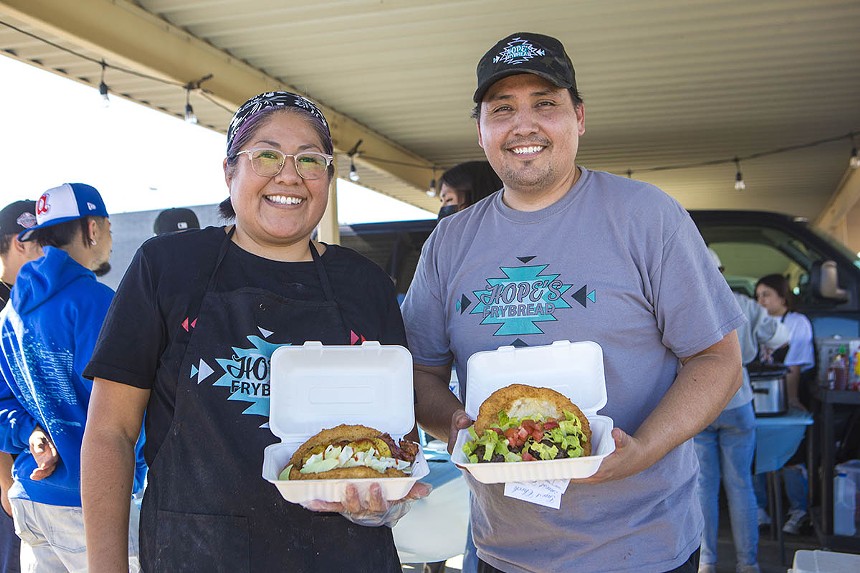 Hope and Aaron Peshlakai with the Asian Persuasion and Navajo burger.
Zee Peralta

Let's hope those plans progress. We're in serious need of more Native American restaurants in the Valley. The main standby, Fry Bread House, is in central Phoenix and leans toward Tohono O'odham preparations. A new brick-and-mortar in the East Valley serving Navajo food (with a touch of fusion) would be a huge addition to our food scene. For now, though, you can catch the Peshlakai family at roadside popups.

Everything on the limited Hope's menu comes on or as frybread. The Navajo burger consists of two beef patties tucked into a folded frybread with ample lettuce and melted, shredded cheese clinging to the slopes of the patties.

They're darkly grilled and cooked between medium-well and well, but juicy and beef-rich in the humble way a simply grilled burger can be.

I also enjoyed the popup's chicken teriyaki frybread sandwich, which is inspired by the chicken teriyaki Hope and Aaron eat at malls. Aaron fishes thighs from a deep vat of teriyaki marinade, crushes them on the grill, and that's that. Grilled pineapple offsets the umami. There's a bit of spiciness, but not much. The sandwich falls apart some as you eat it, but it's satisfying. 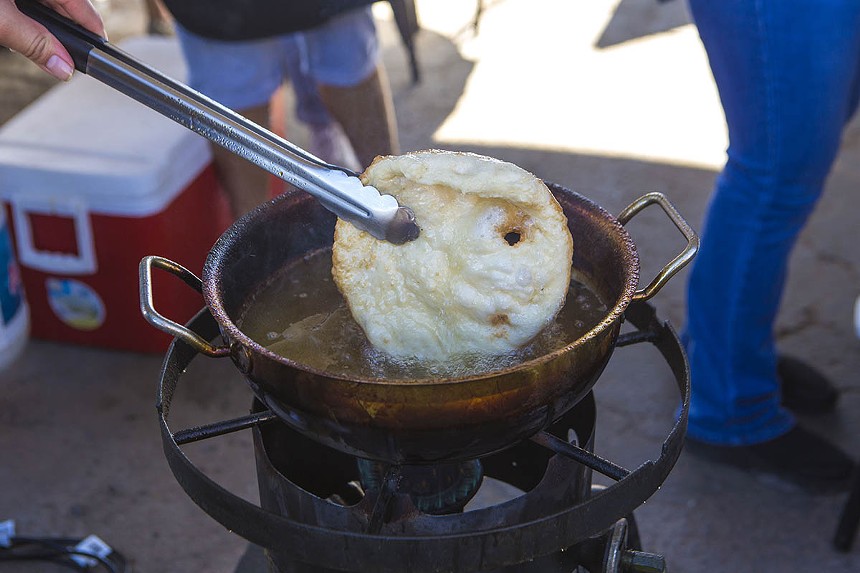 A fresh frybread is plucked from the fryer.
Zee Peralta

On the dessert end, Hope's has several possibilities: s'mores frybread, honey frybread, and Nutella frybread. When I stopped by with my kids, we went Nutella, and man, can some hot frybread lacquered with chocolate-hazelnut paste improve your afternoon.

At this popup, there's an overflowing, joyful simplicity. There are no tricks. No decorations. Only humble, honest cooking and, yes, a few old secrets.

Like her grandmother, Hope pokes a hole in the center of her frybread. She says there's an old cultural story for this, but she prefers a scientific one. "The heat of the oil creates a pressure and a dome in your frybread, right at the center of it," she says, explaining what will happen without the central hole. "It will just kind of bubble up and make for an uneven cooking of that frybread."

Though a visit to Hope's is ultimately brief — your food will be history within 15 minutes — the popup manages to break through a wall that so few public places of eating do. Hope's evades all feeling of artificiality, scripted roles, and plasticity that many restaurants have. It makes for a great eating experience — pure humble food from the heart.