Sarah Chisholm thought that her past careers as a ballerina and a pastry chef had certain things in common.

“There’s so much discipline in both baking and dancing,” she said a few days before Thanksgiving. “Think about sourdough. There’s a commitment and a process to get from yeast and salt to a crusty loaf of bread. In ballet, it’s all about the process and the repetition of technique. In both, there’s a beautiful correlation between effort and outcome.”

Some of Chisholm’s friends told it differently. “The joke became that as a starving ballerina, I was dying to eat some carbs and some butter, so that’s why I got into baking.”

In fact, it was a nasty leg injury, and not stifled hunger, that sidelined her professional dancing career and led her to becoming a pastry chef. Her friend chef Aaron Chamberlin pushed Chisholm to take a different kind of leap.

“He told me I was a good baker and should think about doing it for a living,” Chisholm remembered. “Aaron offered me a job as a low-level pastry cook at Phoenix Public Market Café. I studied under pastry chef Katherine Dwight and I evolved from being a cookie dough scooper to having more responsibilities.”

Not long after, she left Phoenix and ate her way across Europe, working in kitchens and learning new baking tricks. When Chisholm returned to the valley, Chamberlin offered her a job as executive pastry chef at both the Phoenix Public Market Café and his popular St. Francis restaurant. 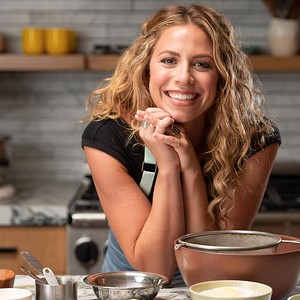 Chamberlin closed the café and sold St. Francis, and Chisholm, who’s married to local restaurateur Aric Mei of The Parlor pizzeria, decided she wanted more than another pastry-chef gig. Earlier this month, she launched Wild Rye Baking Co., a direct-to-door cake mix company. Clients can order cake, pancake, and frosting mixes made from better-quality ingredients than those Duncan Heinz is using.

“An online baking company is really just a way to reach more people than a brick-and-mortar store would,” she explained. “I wanted to build a baking community online, but my community is spread all over the country. I went to art school in North Carolina, I danced in South Beach, Florida, I live in Phoenix.”

She was interested, she said, in telling people in all those places — and beyond — that they could do better than Duncan Hines.

“The cake mix of our childhood is delicious, but some of the ingredients are things you wouldn’t admit serving to your dinner guests. I reimagined simple baking recipes by reverse-engineering them. So, with my olive oil cake, I wanted people to be able to make it at home, but I knew they weren’t going to have perfectly tempered eggs or maybe the best olive oil. It took a lot of tweaking to get these so you’d end up with a restaurant-quality cake on the table that came from a mix.”

She worried about people eating cake frosting made from powdered sugar and Crisco, and she wanted to change that. “I understand wanting to bake something even if you’re not a baker, because it feels like something special and celebratory. But then you reach for a mix, and it’s made with preservatives, and you add canola oil, and you frost it with vegetable shortening, and then what? It feels like cheating to me.”

Chisholm likes to think she’s helping people repair their relationship with indulgent food. “I hear people saying, ‘I don’t eat that anymore because I know what’s in it,’” she said. “I get it. I saw an ad for Cheetos-crusted boneless chicken wings and I thought, 'How is that food?' But we’re limiting ourselves when we cut out indulgent food entirely.”

Wild Rye was different than baking from a recipe, Chisholm said, because a recipe doesn’t talk back.

“I can talk about baking all day long,” she admitted. “It’s my favorite thing. I could have just opened a bakery, but then I’d have been in the back all day, not talking to people about the how and why of baking. And the how and why are almost as important as how your cake turns out.”