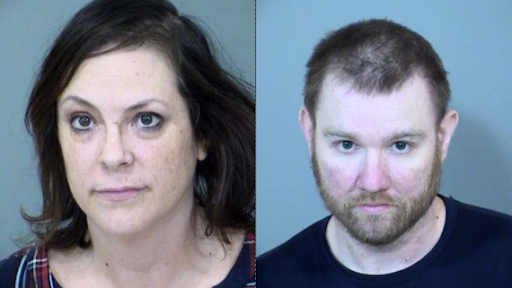 A former Fountain Hills educator has turned her back on classroom instruction – instead instructing her current boyfriend to shoot her ex-boyfriend in Mesa late last month, according to police.


Mesa Police Department identified 53-year-old Michelle Renee Kumar as the mastermind behind a November 22 shooting attack on her ex-boyfriend.

What first appeared as a love triangle turns out to actually be a love square. Police noted that Kumar's paramour of one year still lives with his other girlfriend in the normally quiet, upscale town of Fountain Hills. There, Kumar's many friends and colleagues revere her on social media.

But police are less admiring. They say they found Kumar in her car with a gun magazine and bloodstains on the upholstery.


In court documents, Mesa police said Kumar sent her new boyfriend, 35-year-old Mitchell Keith Storey, to shoot the victim in a wooded area near the corner of Lehi and McDowell roads. Storey shot at the victim twice with a handgun, hitting him in the leg, according to a probable cause statement filed in Maricopa County Superior Court.


Kumar worked at Fountain Hills Unified School District as an instructional aide in 2015 and has been a special education teacher at school districts in New Mexico, Kentucky, Washington, Florida, and Georgia.

Police also accused Storey of one count of aggravated assault with a deadly weapon, plus possession of a firearm by a convicted felon. Storey has been convicted twice of felony endangerment, most recently in Fountain Hills in 2013. He has also been charged with resisting arrest and driving with a revoked license.


If convicted of these charges, Storey could face 17 years in prison, while Kumar is looking at a 30-year stretch. Together, they could pay a financial penalty of $450,000.

Neither could be reached for comment. The victim said he was not involved romantically with Kumar, before declining further comment.

County prosecutors have not yet filed charges against Kumar or Storey.


“We forwarded that case back to law enforcement for additional investigation,” Maricopa County Attorney’s Office spokeswoman Jennifer Liewer said. “This case is under review and there [is] a potential for charges, but we need law enforcement to provide us further information.”

She did not elaborate.


Upon her arrest, Kumar quickly admitted to playing getaway driver for her new beau, telling detectives the victim owed her money and she knew he had no means to pay her back, according to court documents.


Kumar set up a "false meeting" with her ex so she and Storey "could teach him a lesson and scare him,” said police. They noted Kumar also admitted to investigators that she knew the shooting was premeditated. In the days leading up to the crime, the couple had discussed shooting the victim and his car tires, police said.


Police declined to identify the victim.


After Storey confronted him about money and an altercation ensued, Storey shot him and booked it back to Fountain Hills in Kumar’s Hyundai, police allege. The pair left the victim lying on the ground and neither called for medical assistance, according to the probable cause statement.

After attempting to evade arrest, police nabbed Storey at his Fountain Hills home. Storey denied his role in the shooting, telling detectives he was at home that night sleeping with his live-in girlfriend. She failed to corroborate his alibi.


Storey was arrested with a .45 caliber pistol and a fresh cut on his hand. A .45 caliber shell casing was recovered at the crime scene where the victim was shot, police said.


Although Kumar was not directly involved in the altercation, a police report indicates the victim immediately named her to detectives at the scene of the shooting.

On November 24, a Maricopa County Superior Court judge ordered Kumar and Storey to be held on bond totaling $90,000. According to Maricopa County Sheriff's Office, neither remains in custody.