The film critic throwdown is a proud tradition, one with a long lineage. There were giants in the earth in those days, unafraid to tell each other to go pound sand over the slightest differences of opinion. Siskel and Ebert, bickering on TV like a wrestling tag team that’s moments away from a messy breakup, is the Platonic ideal of this tradition. They are the rock upon which the church of culture podcasts has been erected, as innumerable dudes and dudettes across the world roll tape on their impassioned arguments over the media they love and the media they love to hate.

Phoenix’s own Will Johnson and Chicago’s Don Shanahan are recent converts to this church. The two teachers and film critics frequently come to verbal blows as they spar over movies on their Cinephile Hissy Fit podcast. With over a year of episodes in the can and more hissy fits on the horizon, the duo are planning a live event this weekend at Majestic Neighborhood Cinema Grill in Tempe. They’ll be screening Hong Kong auteur Wong Kar-wai’s 2000 masterpiece In the Mood for Love on Sunday, February 6, followed by a live podcast in which Johnson will interview a special guest.

We talked to Johnson about his podcast with Shanahan, his experiences coming back to theaters during a pandemic, and what movie he’d screen for the public if money and film rights were no object.

How did Cinephile Hissy Fit get started?

Johnson: It’s kind of funny because in my everyday life I’m a school teacher — I teach seventh grade — and with my kids and with my family I’m very much the straight man. Quiet and dry. But when it comes to movies, I’m very animated and loud and sometimes obnoxious. I met a fellow writer, Don Shanahan, while writing for a website called 25 Years Later. We would get into these fun fights over movies, developing this dynamic where I became the Jerry Lewis to his Dean Martin. So after six months of these arguments, we were like, “Dude, we need to put this on the air,” as arrogant podcasters are wont to do. You know, “Yeah, people want to hear US talk!”

We settled on those hissy fits we’d have as the format of the show: geek versus geek. We’ll pick a film — one person loves it, the other hates it. Each of us gets five minutes of uninterrupted discussion to make our case. And after we’ve pleaded our cases, there’s the general discussion where we dig into each other.

I gotta say, as a former high school speech and debate kid, I love that kind of format.

It gives us the space we need where I can be loud and impassioned for my five minutes and Don can quietly make his points in his.

Because of the highly polarized nature of your show, is it hard for y’all to keep finding films to talk about where you have such strong conflicting responses to them?

It all started with us looking at my favorite films of all time and Don’s favorites. I don’t wanna say I overuse the word masterpiece, but I tend to be very forgiving with films. I like ideas a little bit more than execution and I’m kind of an auteur guy. I either love or hate directors — I’m nowhere in the middle with anybody. I love David Lynch and I hate Christopher Nolan. So it’s easy for us to find films because Don could be like, “Well, I love Inception,” and I think it sucks. Even though the premise of the show is to have two opposite opinions, we’ve had plenty of episodes where we end up finding some kind of common ground on what we’re talking about.

Going back to what I was saying about our taste in movies — I like Terrence Malick. I’ll put up with three hours of a curtain blowing in the wind. Don doesn’t have quite the same patience for that kind of thing. He’s more into execution over intention. We’re a natural fit for going against each other because he’s more technically minded and firm on his beliefs whereas I’m more wavering and emotional.

In all the time you’ve recorded together, has there been any movie where you two ended up switching positions on it? Like, you look back on a film you advocated for in an earlier episode and realize your feelings have turned a 180 on it?

That hasn’t happened yet. So far, we go into episodes being the hater and the lover, and we’ve yet to switch positions. But I will say that we’ve had episodes where I’ll go in as a very film hater of a film and Don will convince me that it has merits and vice-versa. No complete reversals, though, but I live for that day. That would be wonderful if it happens.

Has it been a challenge collaborating on a podcast from a distance, with Don in Chicago?

We’re both teachers, dads, and film critics, so we live the same kind of life — just different time zones. Don and I agreed that these podcasts should be relatively short. We’ve had some with guests that went very long because we had great discussions, but in general the sweet spot for us is between 30 to 45 minutes. And because they’re so short it’s easy for us to be like, “All right, we just put the kids to bed, let’s pop out an episode.” 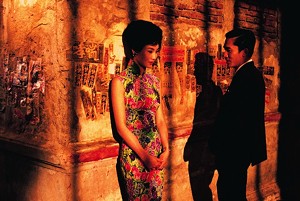 Wong Kar-wai's In the Mood for Love.
Janus Films

How did the live event at Majestic come together, and why did you choose In the Mood for Love?

I’m not really a film programmer — I got into that game through contacts I’ve made at screenings. We’ve done some live events in the past but this is the first one where I met someone — Lauren Knight at Majestic — who understands how I feel about films and also how to market those films and draw a crowd. In the Mood for Love isn’t something I’d necessarily pop in if I had friends over. It’s a slow burn, it’s deliberately paced — it’s definitely not for everybody. But it’s the kind of film that you feel in your bones because it captures the human experience so perfectly if you’ve ever been in love. If you’ve ever had a crush, an unrequited love, if you’ve ever been in love, period — that movie captures that emotion.

So for our first venture at Majestic, I wanted to present a film that would be interesting to crowds but also affecting and personal for me. I couldn’t think of a better film that would serve both ends — the art and commercial aspects.

Speaking of live cinema experiences, I’m curious: What was the first film you saw during the pandemic? What movie drew you back to the theatrical experience?

For the longest time I was sitting around thinking, “If I die, the last film I ever saw in theaters was Bloodshot with Vin Diesel.” So I was anxious to see anything. Now here’s where my Marvel fanboy side is gonna show a little bit. I am a huge defender of the Russo brothers — I think they’re excellent directors. So after I got my vaccines, I decided it was time to go to the movies. I ended up seeing Cherry, which I thoroughly enjoyed. And we ended up doing an episode about it later because Don is anti-Tom Holland while I’m very pro-Tom Holland.

Seeing Cherry was a memorable experience because it felt so weird. I felt so alien being in a theater after being gone for a year and a half. You just kind of forget how the movies work.

My first movie back was The French Dispatch, and I had a similar experience: “Oh wow, this pre-show feels like an eternity.”

I remember when Mortal Kombat came out and that was one of the first big "people are coming back to the theater!" movies. I tried to go see it and it was sold out, but then I realized it was sold out because they were only seating 25 percent of the theater. So at first we're going to theaters and you're very separated from other people, but then you flash forward a few months and now we're in theaters with 300 people watching Spider-Man with no restrictions whatsoever. Everything has changed in such a short time.

If money and screening rights were no issue, what film would you most want to screen for a live audience?

It’s funny you mentioned that, because I was trying to set up a live event back before the pandemic started. I was setting up a screening of my favorite film, Blade Runner 2049, at FilmBar (rest in peace). It was going to happen in March … right when COVID started. And the funny thing is that money was no object at that time because I had bought all the tickets to the screening so I could sell them myself. Whether I sold the tickets or not, the screening was still going to happen. It was going to be a great time, but then COVID came along and it just got destroyed. I felt so bad asking for a refund from FilmBar that I just took the hit and ate the loss. They’re a small business, and I knew that asking for that money from them during a pandemic that’s already going to make them suffer was a lot.

How do you feel about the future of film exhibition?

So long as people are discovering films, whether it's at home or in theaters, that’s what matters.
I know they're always fun in a theater, but you know, when I think back to my childhood — do I remember when I went to the theater to see Shadowlands with Anthony Hopkins? Probably not, but I remember seeing Jurassic Park and experiencing the energy of that crowd. I think it will make the event movies more impactful and it'll make your discoveries at home more meaningful. Ninety-nine percent of all the films we've ever watched we never saw on a big screen because you watched 'em when they were on video or when they were streaming or were on cable or on HBO.

I think we tend to put on rosy glasses when we look at theaters and forget that if a film is good, it’s good no matter where you watch it. Even if Ridley Scott and Martin Scorsese don’t want you to watch movies on your phone, if it’s a good story, it’s still going to affect you.