Tempe Fans Make an Offering to Their 'God of Crypto,' But Is It Just a Trojan Goat?

Danielle Dorfman
A scaled rendition of the EGT Monument to Elon atop a semi-truck trailer
The entire business concept of the Arizona cryptocurrency technology startup Elon Goat Token sounded like a weird joke.

Somebody decided to build a company with the goal of grabbing the attention of billionaire Elon Musk by building a sculpture of his likeness and delivering it to his California doorstep and eventually Texas headquarters.

And just like that, the stunt would deliver a supercharged promotional boost to a new digital currency. Yeah, that will do the trick. So thought Tempe resident and Musk superfan Ashley Sansalone.

He enlisted the help of a dozen friends and a community of the crypto-obsessed. Elon Goat Token is dropping $500,000 on the five-ton, 23 foot-long metal sculpture which is projected to take four months to complete.

Everybody is getting paid, though they won’t say how much or in which currency.

The goal is for investors to ride the wave of Elon Musk juju if it’s successful. It's clear that the two sculptors and fabricators are getting cash – $75,000 each – according to the startup.

Each investor of the digital coin startup paid a “marketing and development tax” for each transaction, which is funding the venture.
click to enlarge It was unclear what to expect walking into the West Sixth apartment complex building in downtown Tempe with skyscraper views of Phoenix and beyond.

Sansalone is the brainchild behind the massive steel monument which features a giant metal head, goat body, riding a rocket ship thrusting itself to the planet of Mars. The symbolism for the goat really refers to G.O.A.T., meaning "Greatest-Of-All-Time."

A semi-truck trailer devoted to carrying the monument will be equipped with lights, pyrotechnics, and concert-quality speakers. It's all an ode to Musk's entire business portfolio as the figurehead of Tesla, SpaceX, SolarCity, and Hyperloop startup The Boring Company.


Perhaps a bit too strong considering that the U.S. Securities and Exchange Commission has attempted to step in and penalize him for sharing company information with the public before investors, contrary to the rules of the stock exchange where his companies are publicly traded.

Some call it 'Elonomics' and others use the name 'Dogelon Mars' in the cryptocurrency world when digital coins have tethered their popularity to Musk.

Startup Elon Goat Token plans to prostrate to the self-proclaimed 'Dogefather' and demand that he accept the gift in real life, not just on the internet. Tesla buyers are able to choose to pay for their new all-electric luxury cars with Musk's favored cryptocurrency, Dogecoin.

Musk fanatic Sansalone has a background in marketing and construction. He hired California designer Danny Wang for the marketing strategy for the cryptocurrency startup.

The goat head, which will weigh around 200 pounds, is being fabricated by a metal sculptor based in British Columbia, Canada. The metal sculptor Kevin Stone is an avid fan of Elon and believes him to be the "Nikola Tesla" of this generation, according to an interview with the Chilliwack Progress.

Stone has already been 'touched' by Musk due to the magic of the internet. His work was tweeted by Musk in 2019. It was a photo of a 35-foot-long sculpture of a Chinese Imperial Water Dragon Musk used as his profile picture for 18 days. Just before the vision of a ruby red Tesla Model S replaced it.

After the sculpture is assembled in Scottsdale, plans are to trot out the artwork on a two-week-long tour as a pilgrimage to Tesla's Palo Alto, California, headquarters with the hopes of presenting it to Musk himself.

During a recent visit, Sansalone showed up outside of the giant apartment complex in downtown Tempe and took a crowded elevator to the apartment where the startup has its own basecamp.

“Trading hours don’t stop with crypto, it’s a 24/7 revolving contract,” Sansalone said about the cryptocurrency market as it appears is always on the top of his mind.

“People around the world in different time zones come in and out, so you’re always accountable in some way," he said.


Near the top floor of the building, Sansalone gets out.

He's donning a camouflaged snapback hat embroidered in large white letters Elon Goat Token's moniker, EGT. From his perch, Sansalone can see the dusty mountain branded with the letter "A" and the rest of the downtown.

For a stint, the startup kept a real live pet goat named BabyElon to "keep spirits high" around the office. But the balcony where BabyElon lived reeked of a petting zoo. So the goat was replaced with a dog as the startup's mascot. Ashley Sansalone, (left) the co-founder of cryptocurrency technology startup Elon Goat Token, is working out of a Tempe apartment.
Cyrus Guccione
The rest of the startup crew, almost none of whom were willing to share their real names, grabbed some Red Bull energy drinks for the caffeination and Smartwater for hydration that their leader purchased earlier that day.

Nobody remarks on the otherwise stunning mountain view.

Instead, the crew is focused on the soft glow of their computer screens. Sansalone said that "getting things done over email is just too slow" and perhaps a quick flight to Los Angeles would speed up the sculpting.

Sansalone's business partner Cory Strawbridge is buzzing around and laser-focused on the task at hand. The pair met six weeks ago and have been inseparable, they said.

“We’re all naturally overachievers by nature, that’s just how we roll,” Sansalone said. “The second we have a minute to breathe we just think of something else to optimize.”

Arizona has become a central hub for the technology industry startup.

Spectacle is a Phoenix-based custom fabrication company run by the Maker brothers which is one reason for the Arizona ties.

Spectacle has been commissioned to work on a wide variety of projects for 'bigger-than-life-experiences' such as for customers like the Super Bowl, Burning Man, and the Waste Management Phoenix Golf Open.

It's not clear how effective the sculpture and public relations stunt will be.

"In advertising and brand development we look to whether the elements of a work are original (rare and surprising) and move away from what's obvious and common," said Nancy Gray, a professor at the W.P. Carey School of Business inside Arizona State University.

But when it's too weird, it doesn't work, Gray said.

"When a work waxes weird – when the audience finds it over-the-top odd in an unsettling way – the opposite is true. Brand affinity and equity suffer because people tend to feel uncomfortable associating with that work/product," she said.

In the meantime, the project caught the eye of Jason Hervey, a television producer. Hervey, best known for his role as Wayne Arnold on the television show The Wonder Years, said cryptocurrency is "fascinating."

“It’s about who is being bold, who is being innovative, and who is looking at this thing in a long-term sense,” said Hervey, owner of a PR business in Phoenix.

He read about Elon Goat Token through Vice News. He's since tossed around the idea for a documentary about the project.

“There are probably teenagers that know more about crypto than I do,” he said. “I’m not some finance expert that can pontificate on the fundamentals of the company. [But] these guys have put everything on the line and have become obsessed with this love letter to Elon Musk.”

Both Strawbridge and Sansalone understand that cryptocurrency is only as valuable as the people who believe in it. Sansalone "moves a million miles a minute" while Strawbridge is much calmer.

“What builds these things is the community, not U.S. [Gross Domestic Product],” Strawbridge said. “It’s a perception of value. It is what we say it is.”

The idea that something so valuable can turn to dust overnight seems bizarre but cryptocurrency has seen some market traction in the venture capital realm at least.

Venture capitalists, who expect to bet on half a dozen potential winners and expect most of the startups to fail, invested $32.8 billion in blockchain and crypto-related technology startups in 2021, according to crypto hedge fund Galaxy Digital.

Early-stage cryptocurrency technology startups, such as Elon Goat Token, accounted for 60 percent of all the cryptocurrency venture capital investments during the fourth quarter in 2021. 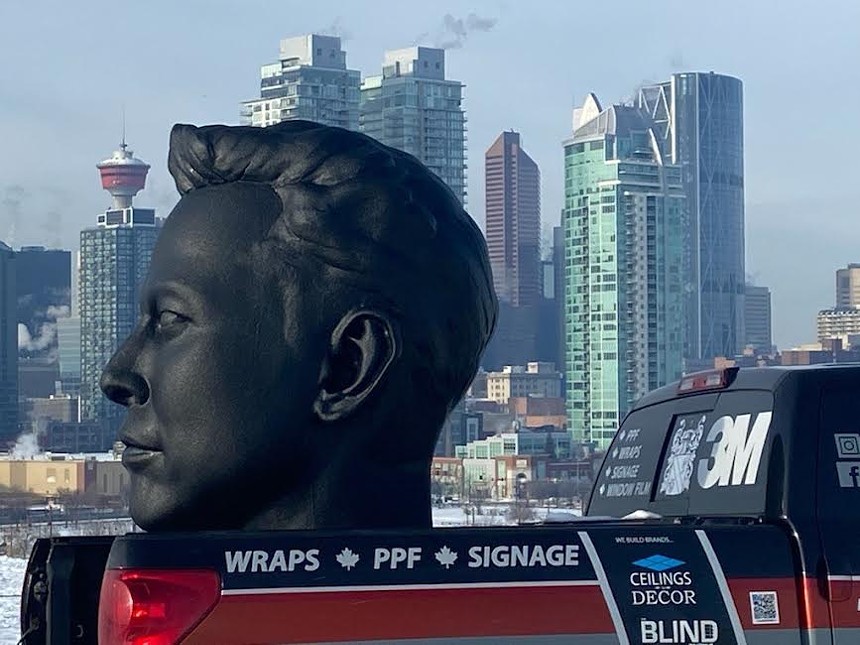 Investors' appetite for a byte of cryptocurrency in their portfolios doesn't always translate to profitable companies. Or any increase in actual value either.

Bitcoin, which was the first widespread decentralized digital currency and most commonly held among cryptocurrency investors, dropped to $33,000 per bitcoin in late January. Each bitcoin was worth $69,000 in November 2021. It's seen as an indicator of the cryptocurrency market as a whole since it's the largest community by market capitalization.

Cryptocurrency is extremely volatile and can lose upwards of $1 trillion in market value in one week. Prices soar when people want to buy and plummet when people are selling digital coins.

The Federal Reserve is considering increasing the fed funds rate which would, in turn, increase interest rates as one way to try and combat inflation.

One bitcoin, the most common cryptocurrency, is the equivalent of 15,193,874 Elon Goat Token digital coins on February 14, 2022.
Elon Goat Token
As such, the overall investor market isn't nearly as interested in risky stocks like technology startups and digital currencies like Bitcoin.

Meanwhile, the Biden Administration is expected to release an executive order which would enable the federal government to regulate digital currencies more closely. Which is not something cryptocurrency investors are excited to see.

“If you’re not on top of things, people just rip you apart,” Sansalone said. “If we say we have to do something we have to do it. and how fast we do it makes our clients excited about the next thing that we say we’re going to do. Once you build that trust, at least when you fuck up or are fall short, people still know that you’re making progress.”

Next for Sansalone: “Managing my anxiety attack and caffeinating,” he says jokingly as he sips on his Red Bull.

His dream is for their company to sponsor a Formula 1 Red Bull race car.

“Personally this would be the coolest thing."
click to enlarge

The entire startup is teetering on a simple response from the techno king of Tesla and whether or not he will accept this monument as his own.

After all, he is the central theme of their project. Musk's position of power in the technology world and his symbolic leadership in the crypto world means he might have the Midas touch of gold.

Or he may see it as a Trojan Goat. "We’re just trying to impress him and see what happens as it all unfolds," Sansalone said.