Consumer spending on cannabis — both recreational and medical — was measured by Headset, a Seattle, Washington-based market research company that specializes in studying the marijuana industry.

Medical marijuana has been sold in Arizona since 2010 but recreational cannabis products have been sold to the general public who are at least 21 years old for the first time last year.

Arizona saw more demand for cannabis than other states in the first year of legalization — a sign of industry success, according to the report.

“The trajectory of growth for the first year of operation is very impressive," the report's author Andy Fuller said.

Nevada, for instance, just broke $1 billion in sales last year, four years after recreational cannabis was legalized in the state back in 2017. 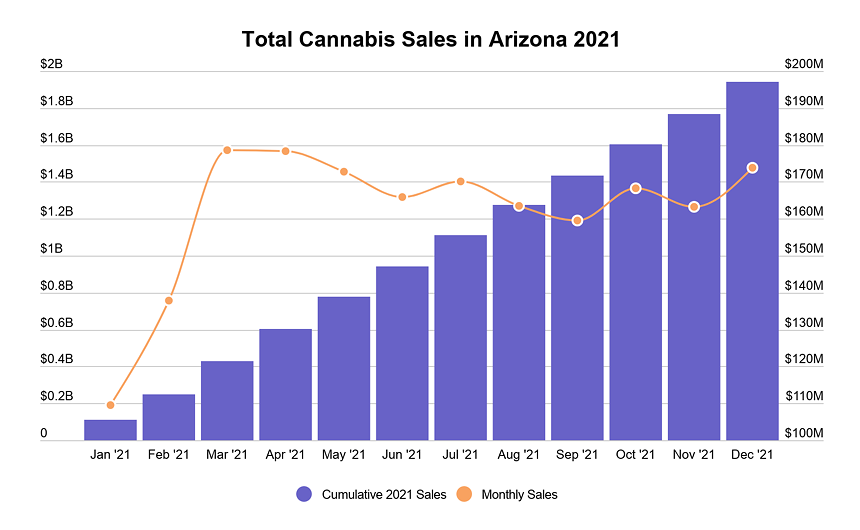 One factor could be that Arizona law allows a much wider range of products to be sold than its counterparts.

Here, you can buy not just raw marijuana flower buds to smoke at home, but also a dizzying array of tinctures, THC, and CBD-infused food products, concentrates, topical creams, capsules, and even pre-rolled marijuana blunts.

Demitri Downing, a consultant and CEO of the Marijuana Industry Trade Association, called the nearly $2 billion figure a “very good indicator” for the industry in Arizona. But, he emphasized, the full scope of the cannabis market is not reflected in consumer sales.

“The economic impact of the cannabis industry as a whole is really yet to be measured,” he said. “The rest of the story is all the components.”

Downing is referring to the network of marijuana-affiliated companies that rely on an ecosystem of vendors, suppliers, transportation, manufacturing, warehouse storage, logistics, and marketing.

This doesn't include employee payroll for all the marijuana dispensary workers, warehouse associates, and even security guard contractors who check identification at the front door of retail sales locations. Analysts estimate that in other, more established markets like Colorado and California, the economic impact of the industry ranges in the tens of billions.

Its sales number for Arizona is higher than the $1.2 billion in taxable cannabis sales that the Arizona Department of Revenue reported last month. The state agency has cautioned that its sales figures are still estimates.

"As we finalize January revenues, we may see additional dollars credited to taxable sales from previous months,” Department of Revenue Spokesperson Rebecca Wilder said in an email.

A spokesperson for Headset told Phoenix New Times in a statement that its research department is wary that the taxes collected so far by the state's Department of Revenue do not reflect total sales.

"As the program is new, [the state agency] is still working with providers to help them understand how much taxes are owed," said company spokesperson Morgan Hurley. "We received confirmation in June 2021 and January 2022 that the tax revenues are incomplete as collections are still ongoing, even for previous months."

According to both the state and the new market research report, total monthly cannabis sales peaked in March 2021, then dipped slightly and stabilized at around $170 million a month by the end of the year.

Purchases of flower — a broad term for dried, smokable pot — accounted for around 47 percent of sales over the course of the year. But its share of the sales is slowly decreasing, according to Headset’s data analysis.

More Arizona consumers are buying vapor pens and edibles, as well. And the prices of most goods — from flower to concentrates — decreased over the course of the year, with the exception of vapes and tinctures.

Sam Richard, director of the Arizona Dispensaries Association, said in a statement that the sales numbers spotlighted “the wild success of the Arizona market.”

Downing, leader of the Marijuana Industry Trade Association, said that he thought that, despite some “hiccups and nuances to be corrected,” the successful first year was a credit to the state’s rollout.

“I think the tax rate was well-thought-out to encourage people to participate,” he said, comparing Arizona’s regulations to those in California, which levies an additional cultivation tax on growers.

Arizona does still have a 16 percent excise tax on retail sales, as well as a transaction privilege tax. Medical marijuana is only subject to the state sales tax, 5.6 percent, and varying local sales tax.

And the success of the first year of recreational cannabis has brought in big dollars to the state: Nearly $200 million in total taxes, according to the Department of Revenue, with more on the way.

It meant that Arizona had proved itself to be a "new frontier" for the cannabis industry, the report concluded.