It's been 19 months since a Tempe police officer held a Black hotel worker at gunpoint while searching for a white suspect in the college town nearby Phoenix.

Ronald Kerzaya, now a former police officer, resigned more than a year after the city released body camera video of the incident, which went viral on social media.

Despite leaving the Tempe police force, Kerzaya still held the proper license, known as a peace officer certification, to still be a legal cop until March 16.

That's because the Arizona Peace Officer Standards and Training Board, the state's law enforcement watchdog agency opened an investigation into Kerzaya over the incident. So Kerzaya voluntarily relinquished that license to avoid a potential mark on his record, advocates claim.

Kerzaya was a patrol officer with the Tempe police department back in August 2020, when he responded to a call about an armed suspect at the Hawthorn Suites in Tempe, at the corner of Southern Ave and Price Road.

His actions that day would, ultimately, cost him his job and ability to work as a law enforcement officer in the state of Arizona anywhere else.

When Kerzaya arrived, the hotel manager informed him that the suspect he was looking for was white, wearing a dark shirt and tan pants. As shown on the security camera footage, the hotel manager said, it seemed that the man was about to exit from the west side of the building.


Kerzaya then stepped outside, where he saw Trevonyae Cumpian, a Black man who worked at the hotel, by an exit. He then approached him, gun drawn.

The man complied with the officer's requests to put his hands up and turn around, according to the video.

Instead, officer Kerzaya made Cumpian kneel on the hot sidewalk, at gunpoint, for around three minutes until he had confirmed that he worked at the hotel. 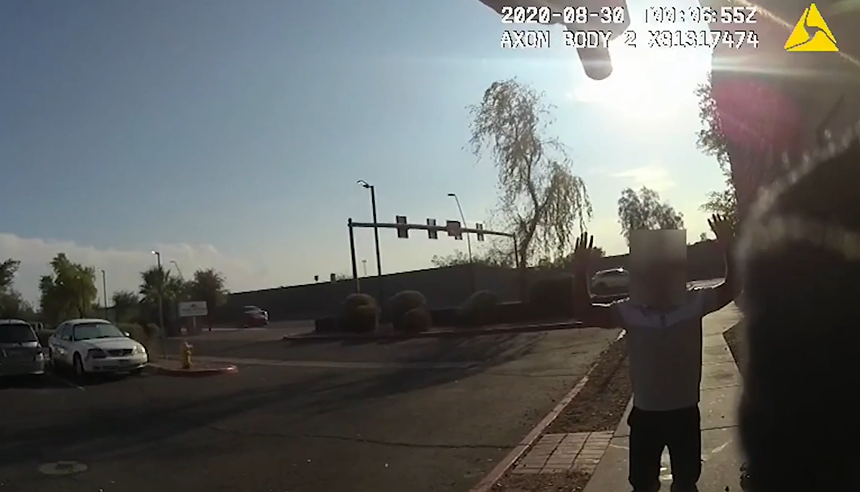 Ronald Kerzaya held up a Black hotel worker at gunpoint while searching for a white suspect.
Tempe Police Department

Benjamin Crump, a renowned Black civil rights attorney who has worked on some of the nation's highest-profile civil rights cases, took Cumpian's case. Ultimately, the city of Tempe settled the civil rights violation claims for $300,000 of taxpayer money.

Kerzaya's employment was not terminated after the incident, even after an internal investigation by the department. Instead, the city of Tempe placed him on a two-week suspension and then demoted him from patrol for one year as punishment.

But it wasn't the first time the patrol officer's decision-making skills were questioned in the public eye.

Kerzaya had been involved in another incident that drew national outcry just a year prior. 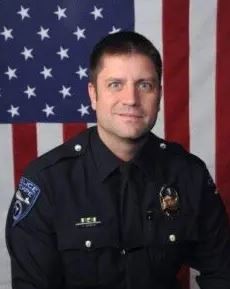 In June 2019, Kerzaya repeatedly tased a Black man who was holding his one-year-old child. He and two other officers were responding to a domestic violence call, and the police department claimed that the man was threatening officers with physical violence. A video of the incident went viral too.

But it was the hotel incident that ultimately ended Kerzaya's career at the Tempe Police Department.

During the Wednesday meeting of the statewide police watchdog agency known as AZPOST, Kerzaya voluntarily released his officer certification.

This is a common move by officers who are under active investigation by the state agency, in order to pre-empt a formal ruling on their case, advocates claim.

If the state board did complete their investigation and rule against him, the ruling would be publicly available.

The state opened an investigation into Kerzaya in April 2021, months after the Tempe police department had concluded that the officer could remain on the force.

State investigators had turned their attention to the case after media reports, AZPOST compliance specialist Steve Jacobs explained to the board in its April 2021 meeting.

"It was based on media information as well as media inquiries from us to take a look at this case," Jacobs said.

The compliance specialist noted that in addition to holding Cumpian at gunpoint, Kerzaya had written a report after-the-fact that Tempe police found to be untruthful. It had "several issues inconsistent with the body-worn camera video," Jacobs said.

In his report, Kerzaya wrote that Cumpian's shirt was black, matching the description given to him by the hotel manager. Body camera video shows, however, that Cumpian was wearing a light gray and white shirt.

Furthermore, Kerzaya wrote that another man he encountered and attempted to follow at the hotel after detaining Cumpian was "white or Hispanic," thus matching the description given to him by the hotel manager.

But in fact, investigators concluded, that man was also Black.

During interviews with internal investigators, Kerzaya defended his actions, according to Jacobs' account.

"As part of an admin investigation, officer Kerzaya informed investigators that he was familiar with witness providing inaccurate descriptions, so his main focus was on anyone exiting the west door," Jacobs said.

Still, the state uncovered enough questions to begin its own investigation into the case. But before it reached a conclusion, Kerzaya resigned from his job.

When asked whether his resignation was related to the state investigation, she declined to comment.

The loss of his officer certification now means that Kerzaya will no longer be able to work as an officer in the state of Arizona.

Per the state's rules, any officer who voluntarily dropped their certification while facing potential disciplinary action is permanently banned from reentering law enforcement.