Arizona is about 4,000 miles from Tahiti, give or take. So if a tropical vacation isn't in your future, you can still indulge in the flavors of the South Pacific at one of Phoenix's tiki bars. Whether you're looking for upscale chic or a dark dive, there's a tiki bar to fit your vibe. The sign to spot on Grand Avenue.
Lauren Cusimano

1502 Grand Avenue
602-252-0472
New bars open in Phoenix every week, but we'll never stop making the trip down Grand Avenue to visit Bikini Lounge, which turns a distinguished 75 years old this year. Bikini Lounge definitely qualifies as a bit of a dive these days, but what it lacks in polish or refinement, it more than makes up for in character. Tiki touches include Tom Cooper murals (most iconically, the topless woman above the bar), a bamboo-walled back patio, and even a tiki-themed bike rack. Cocktails of the tropical and non-tropical variety are good and strong, but remember to bring some folding money — Bikini Lounge is and always has been a cash-only establishment. 7133 East Stetson Drive, #1, Scottsdale
480-699-8454
In the space formerly occupied by iconic eatery Cowboy Ciao, Drunk Munk is a lighthearted take on tiki culture. The bar is anchored by a sizable Easter Island statue, and the menu is full of Asian- and Polynesian-inspired food and drinks. We're partial to bites like the Bottle Rockets, egg roll-wrapped bundles of cream cheese, shrimp, scallions, and garlic. The drinks are strong and come served in cute, kitschy vessels shaped like cats, Buddhas, and tiki gods. Pro tip: If you want to see what Drunk Munk is all about, show up during happy hour (between 3 and 7 p.m. daily) when appetizers and sushi rolls are half-price and several drink specials are in effect. 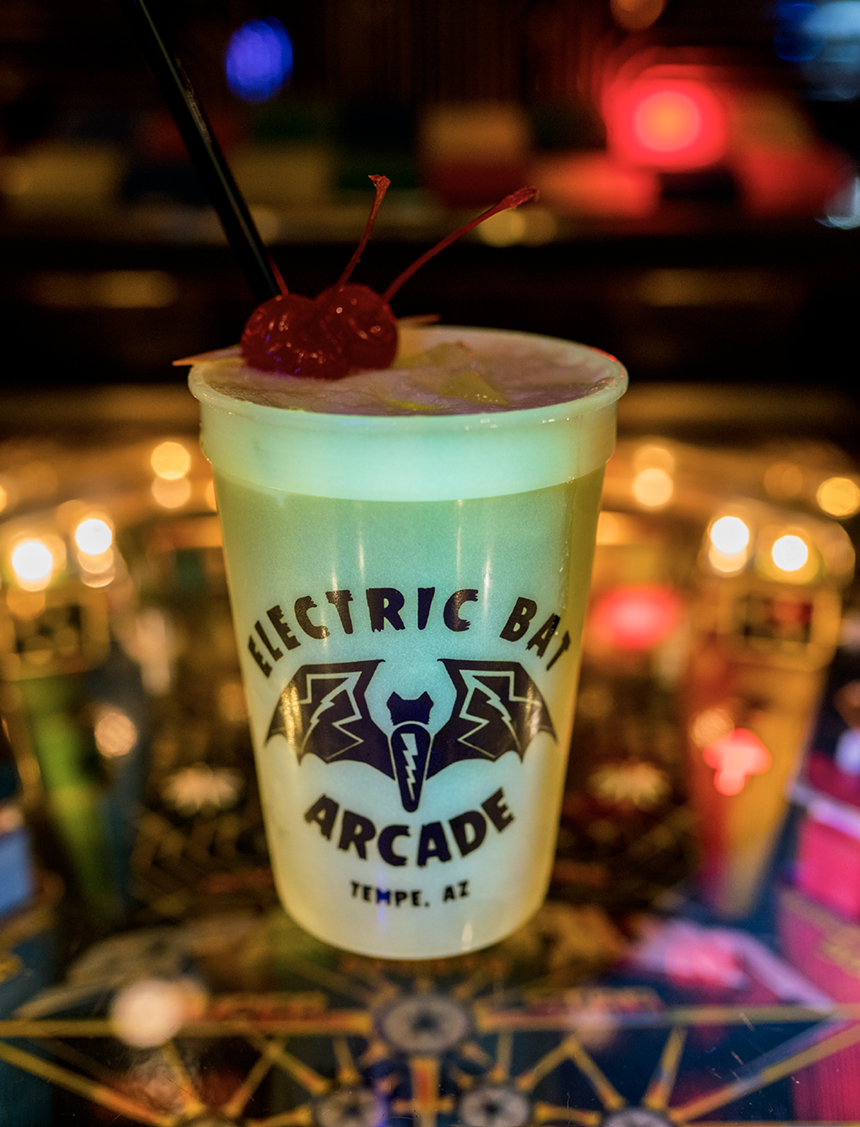 25 West Southern Avenue, Tempe
480-967-4777
The tiki bar inside pinball joint Electric Bat Arcade (which is inside Yucca Tap Room) is more of a nook than a bar, but we still love bellying up to that corner of the space. Tiki torches and raffia trim decorate the little bar, which serves up pop-culture and pinball-themed tiki drinks like the Bela Colada, a pina colada made with mezcal, the Mai Tai My Darling, and the rum-based Dracula's Punch. You can get your drink served in a ceramic tiki mug (which you can take home for an additional fee), but we like the plastic, glow-in-the-dark Electric Bat Arcade cups that are super-cool and free to keep. 5114 North Seventh Street
602-265-8454
Local chain Hula's Modern Tiki has earned its reputation for solid island-themed food and drinks in a sleek, contemporary setting. The drink menu has all the classic tiki drinks like mai tais and hurricanes, plus Hula's creations like the Tropical Itch (light rum, overproof rum, dark rum, Jim Beam, triple sec, passion fruit, cranberry, orange, and pineapple juices, served with a plastic backscratcher) and the Pink Bikini Martini (vodka with pineapple, sweet and sour, watermelon liqueur, and triple sec). The drinks help wash down Polynesian-inspired dishes like Hawaiian ceviche and crispy coconut shrimp rolls. Hula's also has locations in Old Town Scottsdale and High Street in north Phoenix, but only the midtown location has the Captain's Cabin, a semi-hidden concept in the same building that's designed to look like a room on an old-timey ship. 3626 East Indian School Road, #100
undertowphx.com
The gold standard for local tiki bars, UnderTow is an intoxicating mix of enchanting ambiance and inventive cocktails. Nestled in the front of Century Grand near Arcadia, UnderTow is designed to look like the cargo hold of a 19th-century ship. The drink menu reads like an adventure novel, and the descriptions of cocktails like Mysteries of the Cape, Treacherous Seas, and Old Fashioned VooDoo are just as exciting as a naval battle. Make sure you have a reservation before you go, and be advised that you've only got 90 minutes to enjoy the magic of the bar. And on a final note, we're looking forward to the debut of a second UnderTow — the Gilbert location is set to open later this year.