Phillip Caruso
Alex Winter (left) and Keanu Reeves on location at the Circle K in Tempe in 1987.
Strange things are afoot behind the scenes at the Valley’s most famous Circle K.

Phoenix New Times has learned a Tempe location of the convenience store chain prominently featured in the 1989 film Bill & Ted’s Excellent Adventure will close for business in mid-May.

Employees at the store, which is located on the northwest corner of Southern Avenue and Hardy Drive, told New Times they were informed on April 21 of the store’s impending closure. Couche-Tard, Circle K's Canada-based parent company, confirmed the news.

A statement released by the company on April 27, regarding the matter leaned into the Bill & Ted shtick.

“The rumors aren’t bogus. We are planning to close our store at 1010 W. Southern Avenue in Tempe. It’s a location that has enjoyed some most triumphant times in its more than 30 years of serving the Tempe community.”

The store’s closure is due to the company shuttering its smaller Circle K locations.

“We sometimes have to make tough calls on some older, smaller stores like this special location. We’re selling the property and providing opportunities for our team there to continue working with us at one of our many stores in the Valley.”

The Circle K at Southern and Hardy served as a backdrop for one of the cult sci-fi comedy film’s most pivotal scenes. In the context of the flick, Bill and Ted first meet their mentor and guide Rufus (played by the late George Carlin) outside the store and are given a telephone booth-shaped time machine to help kidnap figures for an oral history report.
The setting and scene led to one of the movie’s most iconic (and quotable) lines, delivered by Reeves: “Strange things are afoot at the Circle K.”

Bill & Ted’s producers chose the Circle K at Southern and Hardy to film the scenes over three nights in mid-March 1987. As crew members told New Times for a 2019 retrospective, it was a memorable experience.

Connie Hoy, the film’s key production assistant and a former Valley resident, recalled interacting with Reeves and Winter as they were prepping for the scenes. 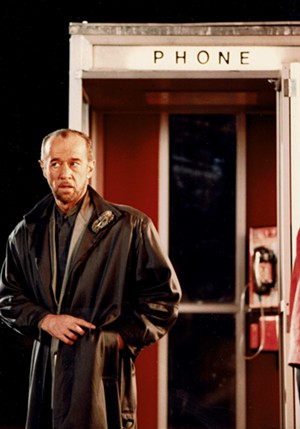 The late George Carlin as Rufus on set at the Circle K in Tempe.
Phillip Caruso
“These two young kids, Keanu and Alex, [were] having the time of their lives. Their energy had to be up all the time,” Hoy said. “That part where they meet themselves and do the ‘69, dudes!’ thing, Keanu was at the craft services table loading up with caffeine before they filmed that. He was like, ‘Man, I gotta go be bubbly!’”

Hoy said she was also blown away by the special effects involved with landing the telephone booth time machine in the Circle K parking lot.

“Just watching them do some of the special effects was amazing, like watching them drop in the phone booth via a crane and wondering, as a film student fresh out of college, ‘How are they gonna do all this?’” Hoy says. “Back then, CGI wasn’t as common, so it was a bunch of plate shots then you drop in the image and combine ’em the old-fashioned way. That was interesting.”

In the 33 years since the film’s release, fans of Bill & Ted's Excellent Adventure from around Arizona and across the U.S. have made pilgrimages to the Circle K at Southern and Hardy. (Sadly, producers of the Bill & Ted film franchise never returned to film additional scenes at the Circle K in Tempe for either of its two sequels.)

In 2019, employees at the store told New Times that dozens of people would visit the location each month to get photos, including pictures of a framed Bill & Ted movie poster hanging on the wall next to its checkout counter.

Fans have also featured the store in numerous tribute videos on YouTube and other platforms. And like a hapless Circle K clerk in the film, the store’s employees have been repeatedly quizzed about when the Mongols ruled China. The interior of the Bill & Ted's Circle K in Tempe.
Ryan Curtis
Another question they’ve been asked lately: Why is the store closing? Employees don’t have an answer, telling New Times they haven’t heard the reason as of yet.

Word of the store’s impending closure has spread over social media in the past few days, including in Facebook groups dedicated to the Bill & Ted franchise. Fans of the film have been devastated by the news while a few are talking about launching fundraisers to keep the store open.

A few fans have made jokes.

Editor's note: This story has been updated since its original publication with a statement by Circle K's parent company and additional details.