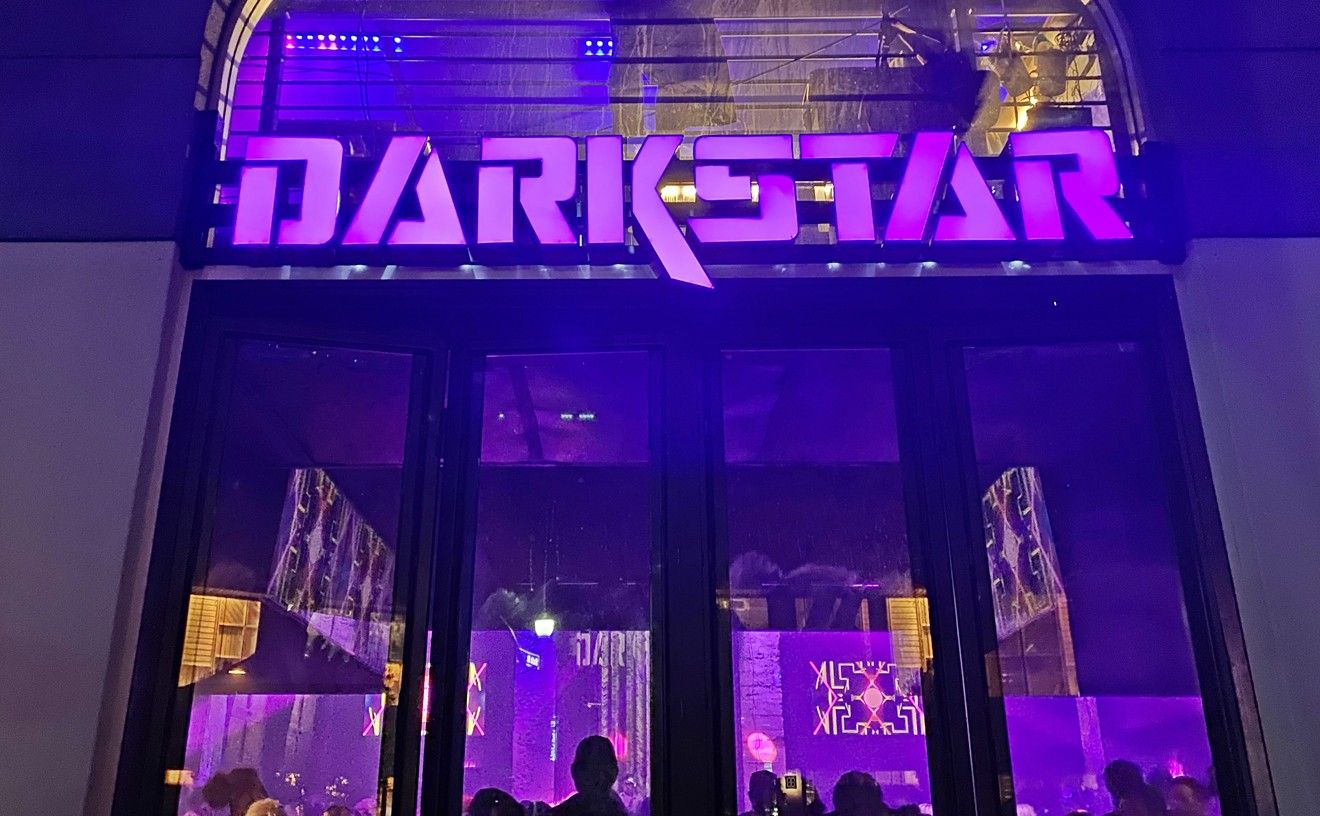 Benjamin Leatherman
The exterior of Darkstar in downtown Tempe.
Shady Park owner Scott Price has opened a new venue in downtown Tempe, and it's come in handy when dealing with the fallout from his ongoing legal battle with Mirabella at ASU.

This past weekend, the bar owner and restaurateur opened Darkstar, a 4,500-square-foot music venue located at 526 South Mill Avenue. The two-story spot features multiple bars, a PK Sound system, a large stage dotted with video screens, and a mezzanine level that allows views of the enormous dance floor.

It's the latest bar and venue from Price, who also owns nearby downtown Tempe spots C.A.S.A. and Sunbar in addition to Shady Park.

Much like Price’s other spots, Darkstar, which held its soft opening on April 28, will feature performances by both bands and DJs. Local concert promoter Relentless Beats will also book big-name electronic dance music artists and events at Darkstar.

The venue is located inside the historic Tempe National Bank Building, which was constructed in 1912. Prior to becoming Darkstar, the property was home to Charlie Trumbull's Tempe National, a bar and dance club launched by Price in 2018.

Charlie Trumbull's shut down in March 2020 due to the pandemic but never reopened. The property was eventually reconcepted as Darkstar.

The project was first announced on social media in May 2021 and was slated to open two months later. A grand opening was scheduled for late July 2021 with local reggae band The Irie and San Diego-based act Sensi Trails booked to perform.

The concert was later canceled and Darkstar’s debut was delayed, likely because of problems had arose between Shady Park and Mirabella at ASU.

In June 2021, Shady Park got into a public spat with the neighboring 20-story senior adult apartment building and "intergenerational community" located across the street from the venue after Mirabella residents complained about noise coming from EDM shows.

Price shut down Shady Park the following month to install step-pyramid roofing and other sound-reducing measures in hopes of “[making their] neighbors happy.” The improvements didn’t resolve the issue, though, and Mirabella at ASU filed a lawsuit against Shady Park in October 2021.

In April, a Maricopa County Superior Court Judge Brad Astrowsky ruled in Mirabella's favor and imposed stringent noise restrictions on Shady Park. The decision is being appealed, but Price chose to pull the plug on shows at the venue as he felt “the restrictions [made] it impossible for us to hold live music events.”

(Price has declined interview requests by Phoenix New Times regarding the matter.) The view of Darkstar's stage from its dance floor during the venue's soft opening.
Benjamin Leatherman
Darkstar quietly opened weeks after Price announced his decision. A number of EDM events promoted by Relentless Beats were moved from Shady Park to Darkstar, including a gig headlined by Au5 and Chime on April 29 and a performance by Canadian electronic artist Jacques Greene on April 30.

Local EDM fans have embraced Darkstar since its opening, albeit while holding out hope that music might somehow return to Shady Park. New Times witnessed sizable crowds at Darkstar all three nights of its opening weekend.

One local EDM fan was particularly enthusiastic in a Facebook post about the Au5 and Chime’s performance.

“Holy SHIT...If you were at Darkstar tonight then you know how amazing the show was,” they wrote.