Food always brought us together. I grew up in a Filipino household, so not only was there always food in the fridge, but Mom was always asking, “Did you eat? Are you hungry?”

When I moved to Phoenix after living in New York and Los Angeles, I realized quickly that here, good food is very accessible, and you don’t have to spend your whole paycheck to eat at some of the best places in the country.

And just like when I was growing up, food is community. May marks Asian American and Pacific Islander Heritage Month which celebrates the histories and heritages of those whose roots are founded across the Asian continent and within Pacific Islands including Fiji, Hawaii, Guam, and Samoa to name a few.

The list of cultures is inherently diverse, and with that list comes an exciting and massive range of ingredients, flavors, and dishes.

The Federal Asian Pacific American Council declared this year’s theme for the month to be “Advancing Leaders Through Collaboration." True to this theme, we’ve rounded up the movers and shakers of Phoenix’s Asian and Pacific Island-inspired cuisine.

Though we could not cover all culinary innovators, this select list of restaurants and small businesses have been bringing innovation to their dishes and championing culture and community in the Valley.

From purple rice and sushi burritos to Hong Kong-style desserts and Filipino lechon, these restaurants deserve a shout-out for their culinary prowess and ideas that have brought an array of Asian flavors to the Valley. Together, they form a culinary community that is Phoenix’s own.

114 West Adams Street
602-258-0131
harumisushiaz.com
Harumi Sushi & Sake first gained distinction because of the purple rice it brought to its dishes. Black rice turns purple when cooked, and historically, was reserved for aristocracy.

“Black rice is a staple in Asian countries, and we wanted to uniquely bring black rice, which is a lot healthier, to the Valley,” says owner Jessica Kim. “Our refined techniques on curating black rice to complement our dishes was a long process, but an innovation that is well worth the effort it took to perfect."

Harumi is committed to a “sea-to-table” experience, flying in fish from all over the world and creating dishes at affordable price points so families can share a Japanese meal in Downtown Phoenix.

“Harumi’s interpretation of Japanese cuisine is to stay true to authenticity and quality. Those two things are non-negotiable,” Kim says.

Order customer favorite sushi rolls like the Oh My God Roll which comes out on fire, or the H3 which includes spicy tuna and salmon flown in from Scotland. Harumi was recognized as a 2022 Women-owned Minority Business by Yelp and just opened its second location in Peoria. 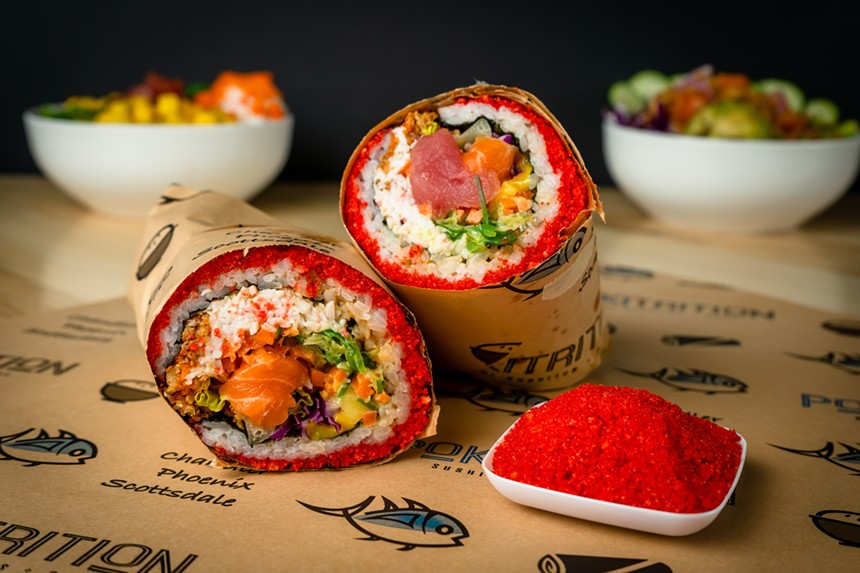 Sushi burrito with Hot Cheeto Crunch on the outside.
Photo by Pokitrition.

3235 West Ray Road, Chandler
480-818-9819
pokitrition.com
The West Coast is no stranger to the sushi burrito. But it wasn’t until four kids out of college formed Pokitrition that Phoenicians could finally take a bite into this innovative take on traditional sushi.

“The inspiration behind the sushi burrito was to be able to bring a dining experience where sushi bites meets full meal, meaning a person can eat a mouthful of sushi instead of bite-size pieces with a chopstick and with the ingredients they like,” says Jimmy Li, co-owner of Pokitrition. “We are continuously adding new signature items to our menu to play around with different flavors.”

Choose the Spice-Sea Burrito or the Crispy Spam N’ Eggs Breakfast Burrito, and even add a Hot Cheeto Crunch on the outside.

Despite facing challenges as customers get used to their innovative menus, Pokitrition just opened a new Scottsdale location and has expanded their menu, which now includes Hawaiian staples like pork katsu and Hawaiian macaroni. But the owners credit their success back to their community. 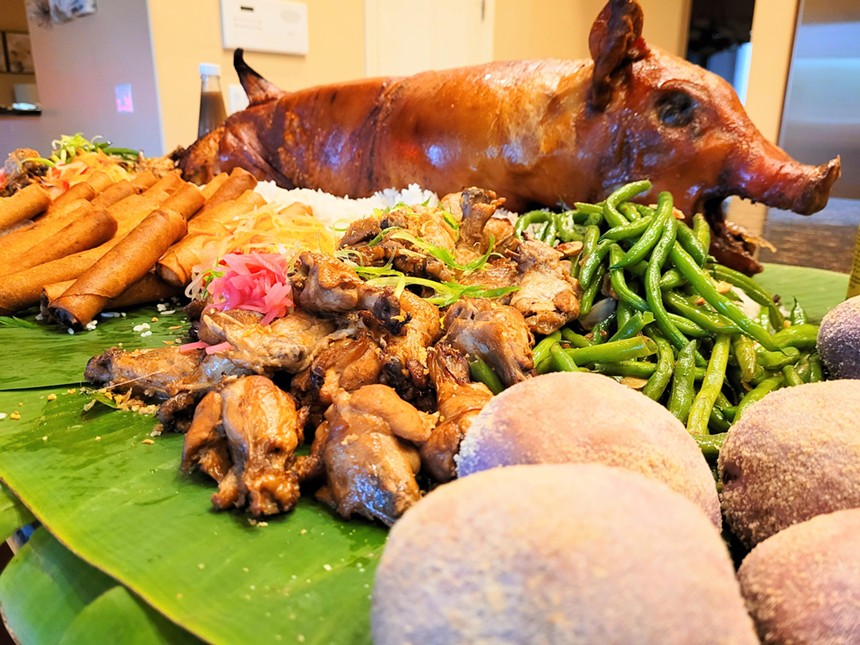 659 East Main Street, Mesa
602-410-8115
phxlechonroasters.com
PHX Lechon Roasters started as a Filipino street food truck, but the purchase of a lechon pit for a friend’s backyard barbecue would change the owners' trajectory forever.


“When you’re roasting a whole pig, rotisserie-style, live at an event, there are many obstacles to overcome,” says co-owner Brian Webb, who runs the company with his wife and partner Margita.


Roasting an entire pig is not a simple task, and adding delicious ingredients is what puts PHX Lechon Roasters on the map. The couple admits that nowadays, people are much more knowledgeable about Filipino cuisine, which wasn’t the case a decade ago.

“More people are digging past the surface of lumpia and adobo," Brian says. “So many people of different cultures have memories of roasting whole pigs. People from Cuba, the Dominican Republic, Mexico, Puerto Rico, then, Tennessee, Iowa, and more, have all shared their experiences with us.”

But what makes PHX Lechon Roasters special Margita adds, is her family recipe.

“We’re unique for our lechon here, but it is the same from where I’m from. In Cebu, Philippines we stuff it with lemongrass and only use charcoal to cook it. We use charcoal here, not many other people do," she says. "But most importantly, we always put love into our food.” 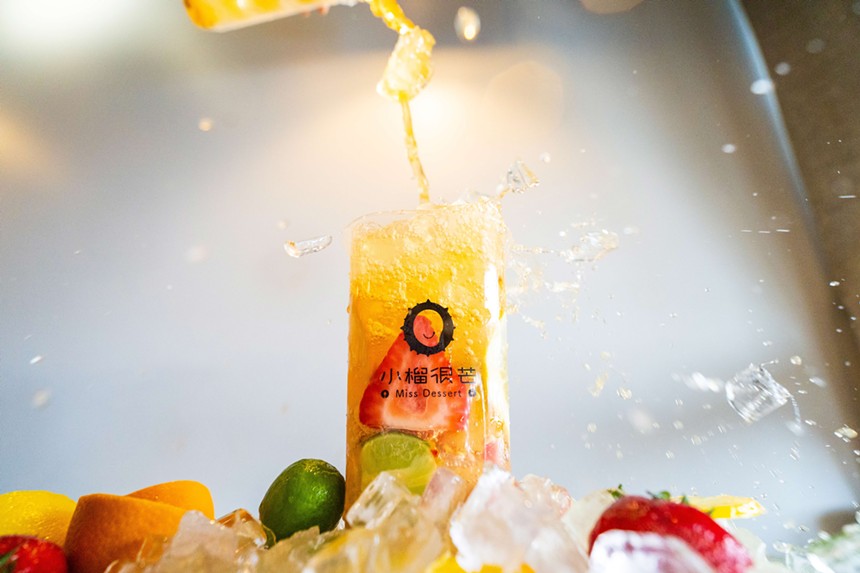 1832 West Broadway Road, Mesa
480-912-3585
missdessertus.com
Back in 2012, Harry Yu was an international student yearning for the tastes of his hometown. What started as homesickness and nostalgia quickly transformed into a journey of bringing Hong Kong dessert recipes first to Texas, then to the Valley.

“I saw lots of international students drive five hours from Dallas to Chinatown Houston to find the taste that they were missing, just like myself. That's the reason that I went to build Miss Dessert with my parents together,” Yu says.

Since opening in Mesa in 2018, Miss Dessert was immediately embraced by ASU Chinese students and has expanded its reach exponentially since then.

On the dessert menu, choose from three bases: vanilla snow, sago, and yoji. The Mondo Mango, a crowd favorite, is a mixture of Thai sticky rice with mango in vanilla snow.