A Perfect Summer Pairing: Find Cold Beer and Comedy at this Phoenix Brewery

As Phoenix heats up for the summer, there's nothing quite like a cold beer enjoyed in the air conditioning. One local brewery has added an entertainment element to its offerings, perfect for cooling off and hanging out on these hot summer nights.

PHX Beer Co., a brewery with locations in downtown Phoenix and Scottsdale, is hosting comedy shows this summer on the last Saturday of each month.

"PHX Beer Co. is all about bringing the neighborhood together," he says.

The comedy series is designed to do just that. Once each month local comedian Reid Clark hosts a roughly two-hour-long live comedy show featuring six comedians. Tickets and seating are available at the door or ahead of time through Eventbrite. 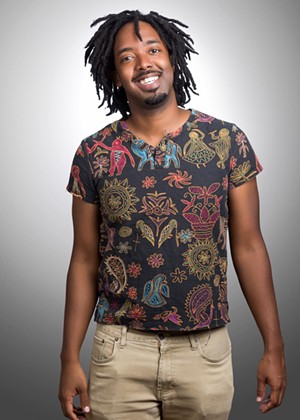 Clark was unable to attend the show on May 28, but the very funny Shanna Christmas filled in. She told a few self-deprecating jokes, gently ribbed the audience, hyped up the comics in between sets, and stayed after the show to sell her book, a series of comics about her experience working in nursing homes.

When the show got started, comedian Nick Riback was recognized by an audience member as "the ticket guy" and he leaned into the role, going on to joke about his experience doing security for House of Comedy AZ. A comic known as What The Hector told jokes about his experience living in an RV and received a lot of laughs from the crowd.

One surprise guest comic known as Miss Q took some funny soft jabs at audience members, teasing two women about outfits more fit for a club, and teasing a married couple that was sitting at a shadowy table against the wall. It was light-hearted and in good fun, with no heckling or personal attacks.

The final comic, Guy Hannah had the most polished set of the night. He talked about relocating to Arizona from Louisiana. He also joked about being a dad, trying to lose weight, and had a few fun back and forth moments with the audience. As a full lineup, it was entertaining and it felt good to laugh.

Tickets cost $16 and have no-drink minimum, which is common at other local comedy shows.

The Margherita pizza, pretzel bites, bratwurst, and a flight of craft brews were a tasty accompaniment to the entertainment. The menu at the Phoenix brewery is full of familiar items from the Scottsdale location's kitchen. A door in the taproom provides a view of the brewing tanks at PHX Beer Co.
Melissa Parker

For those looking for more ways to beat the heat this summer, every Sunday, PHX Beer Co. Taproom offers scheduled tours.

"You can buy a package deal of a brewery tour t-shirt, a four-taster flight of beers, and pretzel bites for $29 per person," Barney says. If Sundays don't work, the brewery hosts tours by request.

"Kids are also invited to the tours and can try the root beer," Barney says. "We are a family-friendly brewery."

When it comes to eating and drinking local and beating the heat with a fun comedy night or brewery tour, PHX Beer Co. has plenty of ways to join in this summer.