CrimeDoor
CrimeDoor uses augmented and virtual reality technology to help keep cold cases in the spotlight by re-creating real crime scenes down to the most graphic, gory, and ultra-realistic detail.
click to enlarge 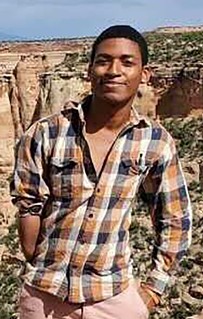 Daniel Robinson, 24, went missing in Buckeye on June 23, 2021.
PleaseHelpFindDaniel.com
One year ago today, 24-year-old geologist Daniel Robinson left a job site in Buckeye, near Sun Valley Parkway and Cactus Road, in his steel blue Jeep Renegade and headed west into the desert.

He was never seen again.

His family carried foam board signs, bearing his face, and posted paper bulletins across metro Phoenix as they pleaded with police for a more thorough investigation into his disappearance.

As the months slipped by, the signs began to disintegrate. They ripped, they got wet, they blew away in the wind. Some of those signs were covered up with other signs.

One year later, there are still no answers. But there’s a new sign begging the public for information about the missing Robinson.

It doesn’t exist in the real world and will never succumb to the elements. It’s a milk carton-style missing person advertisement that you can find in the world of virtual reality thanks to CrimeDoor, a startup based in Hollywood, California.

CrimeDoor uses augmented and virtual reality technology to help keep cold cases in the spotlight by re-creating real crime scenes down to the most graphic, gory, and realistic detail.

In the digital universe, detectives and armchair sleuths alike can inspect weapons, shell casings, and blood spatter at real crime scenes that were cleaned up decades ago.

“The crime scenes are preserved forever,” CrimeDoor founder Neil Mandt told Phoenix New Times on Tuesday. “The detectives can go back and revisit it. Somebody, years later, might see it a different way. That can lead to cold-case murders getting solved.”

CrimeDoor sends push notifications when you pass by an area that was once a murder scene. Peep through your smartphone camera and you'll see the body, complete with blood, shattered glass, and all the other macabre details.
Screenshot
CrimeDoor hasn’t been used to crack a cold case in Arizona yet. But the company thinks it's close.

Information on the three-dimensional missing person posters in the app can be changed easily and instantly as new information surfaces. They’re easy to distribute quickly on social media, too.

“The idea that only police can solve crimes is bullshit,” Bill Richardson, a retired detective with the Mesa Police Department, told New Times on Wednesday. “In law enforcement, you have bias and you can develop tunnel vision.”

Police departments across the country and the FBI already have vouched for the usefulness of CrimeDoor. They are using the app and working with the app's founders, Mandt and his wife, Lauren, to catch things that may have been missed during original investigations and as a way for users to aid in solving cases.
click to enlarge

Creators describe the tool as “a revolutionary news app for the true crime space” that “delivers daily news updates with an unmatched database of case file content from around the globe.”

The database includes more than 1,750 cases, according to the developers.

That’s what Mandt, a 10-time Emmy Award nominee, had in mind when he launched CrimeDoor in 2020.

He produced films like Disney's Million Dollar Arm and covered sports including The Road to the Super Bowl in 2018 and the 2000 Summer Olympics.

Educated and trained as a journalist, his interest in true crime started in 1995, when he produced broadcasts of O.J. Simpson’s murder trial and the Oklahoma City bombing for ABC News.

“Reporters go out there every day and tell the worst stories,” Mandt said. “You wake up and it's like, ‘What horrible thing am I going to see today?’”

After five years in the news business, Mandt couldn't take it anymore. He questioned if he was too soft for the job.

“It was too much for me. It was too intense,” he said. “I didn't want to be around all that. It took a toll on me and it made me think about families and victims and how they are left out.”

He was thinking about Robinson, the 24-year-old who has been missing for a whole year.

Robinson is one of nearly 2,000 cases highlighted in the app. More than 60 of those cases are in Arizona.

Other subjects are Caleb Powell, who also was 24 years old when he went missing in Maricopa in 2014, and Mikelle Biggs, a girl who was 11 when she was last seen riding her bike in Mesa in 1999.

“These victims only have a moment in time,” Mandt said. “When the hype goes away, the families are left by themselves with that pain forever. I wanted to do something about that.”

Mandt was inspired to create CrimeDoor when he played Pokémon GO, a mobile video game that is widely credited with making augmented reality mainstream. He calls CrimeDoor “the ESPN of true crime.”

With CrimeDoor's new virtual reality technology, users can step back into Manhattan in 1980 and explore the scene where John Lennon was shot dead.
CrimeDoor
The app allows users to walk through some of the most infamous crime scenes, involving victims such as Nicole Brown Simpson, JonBenét Ramsey, Nipsey Hussle, Tupac Shakur, and John Lennon. The fatal shooting of the ex-Beatle offers details like the discarded revolver, the dropped reel-to-reel tape, Lennon’s bloodied body, and Yoko Ono on her knees weeping for her murdered husband.

And CrimeDoor does not hold back on the gory details. Exploring the scene of Rebecca Zahau’s suspicious hanging death near San Diego in 2011, users can see the woman's nude body dangling from a balcony with her wrists and ankles bound and her hands behind her back.

“When you experience things, you can understand them,” he said. “It is impossible for the human brain to understand something without experiencing it. Visual learning is so much more powerful.”

Users can even witness the crucifixion of Jesus Christ on the CrimeDoor app.

But that has led critics of the app to accuse Mandt of exploiting tragedies for profit. Experts wonder if investments in virtual reality technology will move the needle on America’s growing murder problem.

According to the most recent FBI data, in 2020, just 46 percent of homicides were cleared.

The second half of 2020 was the only six-month period of time in recorded American history when the majority of murders went unsolved, according to the FBI.

It’s likely that future FBI data will show that 2021 was the first full year when that's true in the United States, according to Tom Hargrove, a retired investigative journalist and former White House correspondent based in Washington, D.C.

With a vision not too dissimilar to Mandt’s, Hargrove founded the nonprofit Murder Accountability Project in 2015 to track unsolved homicides nationwide.

“We are less likely to solve a murder now than we ever have been in American history,” Hargrove told New Times on Tuesday. “You’d think with all the new technologies we’re developing, you’d think we’d be solving these murders in 60 minutes.”

“We’re getting worse and worse at solving these crimes,” he said. “I applaud new technology, but the truth is, everything is going south.”

In Hargrove’s opinion, the only solution is to bolster funding for law enforcement agencies to allow for investments in forensic analysis, detective work, and state labs.

When DNA testing became prevalent in the mid-1980s, many people thought they’d never see an unsolved murder again, Hargrove recalled. It didn’t play out that way.

As of last month, detectives in Arizona are waiting an average of 126 days to get the results of a DNA test amid a 700-case backlog, according to numbers from the Arizona Department of Public Safety. In some cases, cops wait two years for DNA test results.

“Cops send off a DNA sample and say, ‘OK, let’s wait a year for this,’” said Richardson, the retired detective in Mesa. “It just doesn't work.”

For homicide detectives, the first 48 hours can mean the difference between a closed case and a cold case. So when DNA tests come back months or years later and don’t point to the prime suspect, things can get dicey.

“It’s going to take a major political and financial commitment to make a change,” Hargrove said. “Technology has not been the magic bullet we thought it would be. I don't think we’re going to see any kind of dramatic improvement in clearances with this app.”

But its Developers believe that big break is right around the corner.

The app isn’t entertainment for true crime aficionados as it may seem, Mandt says. It’s a journalism project and database with the sole purpose of offering a portal for those seeking a fresh perspective on homicide cases worldwide.

“I believe the innovation of AR technology in criminal cases is as paramount as the introduction of DNA, and will be critical to the future of solving cases,” said Paul Holes, a missing person investigator and AR content creator for CrimeDoor.
Most of the content on the app is free, and there are no ads, Mandt pointed out. Creators do not have entertainment value in mind when they replicate thousands of grisly murder scenes and missing person posters, like Robinson’s.

Mandt and his crew are coming to Phoenix this Saturday to raise awareness for Robinson and other missing persons in Arizona.

“People are very interested in the content in Arizona,” Mandt said. “If you look at data where people search, Phoenix gets a ton of attention.” The fact that the Grand Canyon State ranks fourth in the country in missing persons might stir their curiosity.

The CrimeDoor app features more than 200,000 hours of interactive content. According to developers, two or three new cases are added to the database every day.


There will be a volunteer search for Robinson from 5:45-10:30 a.m. Saturday, in the same area of Buckeye where he went missing a year ago. Later that day, the CrimeDoor team will be available at the Arizona State Capitol lawn at 6:30 p.m. to build case files for any concerned families in the area still looking for their missing loved ones.

“It may be the thing that a responsible citizen sees, and something jogs their memory,” said Richardson. “It could be a case that’s been sitting idly for 15 years and somebody new picks up the case file, and they have a different visual perspective than anyone else who has looked at it.”

He’s still haunted by cases that he couldn't solve. And he believes that, with “intelligence-based investigating” during his career, he might have solved those cases.

“If I had new tools to utilize, fuck yeah,” Richardson said. “I’d take it. Technology is evolving.”