Best and Worst Candidates on Cannabis, According to Arizona NORML 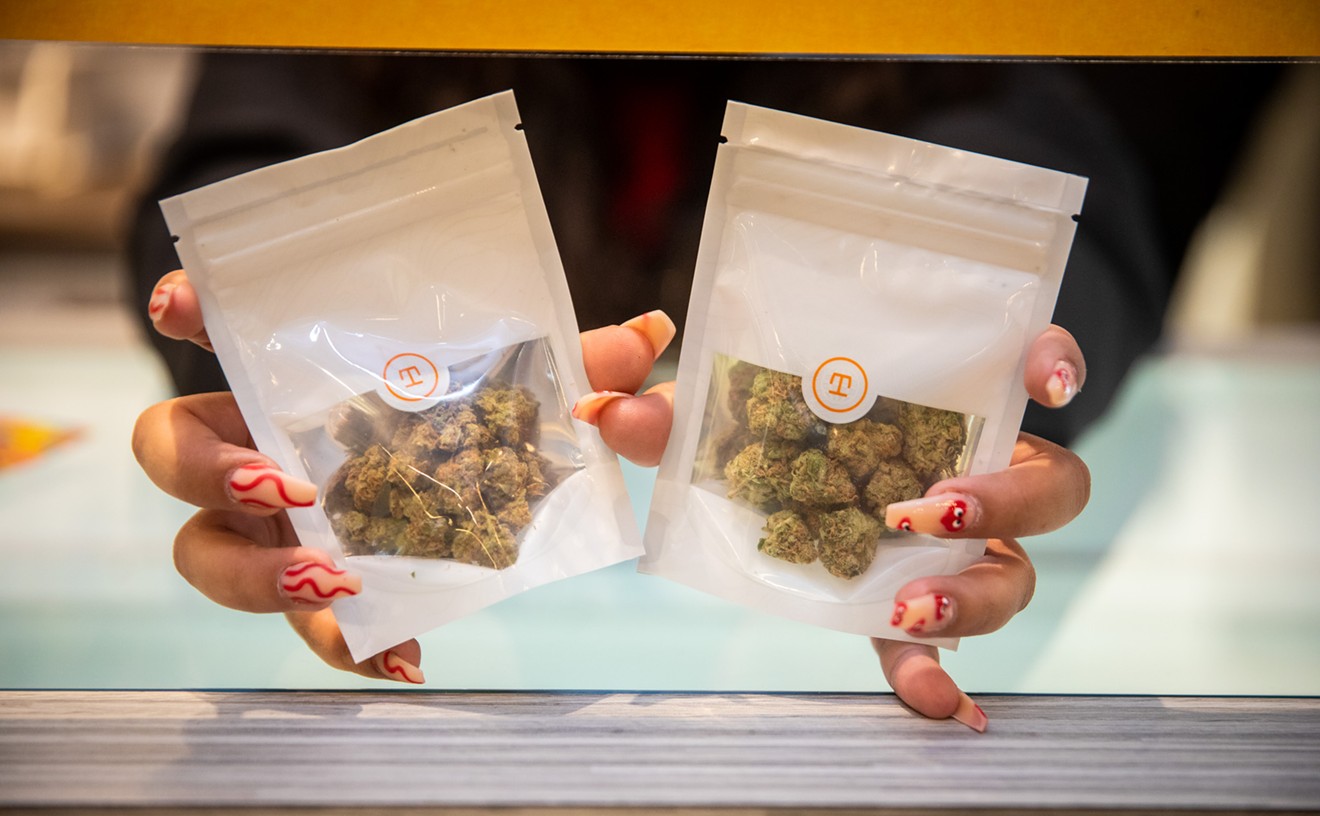 Jacob Tyler Dunn
These marijuana flower buds come from the Mesa location of Territory Dispensary.
The August primaries are fast approaching. It's the beginning of an election season that will have wide-ranging impacts on Arizona politics, as newly redrawn districts shake up Senate races, and seats for governor and attorney general are left vacant.

If you want to know where the candidates up and down your ballot stand on cannabis, Arizona NORML — an advocacy organization focusing on cannabis legalization and policy — surveyed hundreds of primary candidates in the state on their views.

The organization's massive guide to the primaries, released last week, rates each candidate on a scale of F to A-plus, based on their responses and their past record on pot.

Recreational marijuana has been legal in Arizona since November 2020, when Proposition 207 became the law of the land. But there are myriad cannabis issues that elected officials control — including how to oversee the tightly regulated industry, and whether to expand or change expungement laws for cannabis crimes.

"We do see that who we elect to that legislature really makes a difference with respect to cannabis issues," said Mike Robinette, executive director of Southern Arizona NORML, who spearheaded the project. "We want to draw attention to that."

Robinette and NORML staff sent a survey to primary candidates that asked them to mark whether they agreed or disagreed with 10 cannabis-related statements. More than 100 responded out of about 285, Robinette said. Candidates were ranked on their answers, as well as their voting records on pot issues.

"Agree or disagree: Expungement laws should be expanded to include more nonviolent cannabis offenses," was one of the issues put to candidates. Another: "People diagnosed with autism spectrum disorder should have the medical freedom to medicate with cannabis." Others related to whether more craft licenses should be added to the market and fees for obtaining medical marijuana cards.

An "A" was the most common ranking — a sign, perhaps, of growing acceptance of progressive cannabis policy among elected officials. While there are still cannabis prohibitionists lingering in the Arizona legislature, Robinette said, he is seeing that shift.

"Really what we see is that the newer the person, the more they tend to be pro-cannabis," Robinette told Phoenix New Times on Thursday.

In all, 65 candidates received "A" grades, though only 10 received the highest "A-plus" score. Another 37 candidates received a B. The rest were fairly evenly split, at 25 Cs, 26 Ds, and 24 Fs. Some candidates — including Donald Trump-backed Senate candidate Blake Masters and opponent Jim Lamon — did not answer the surveys and have been tight-lipped about their views on pot, and thus were not ranked.

Who has the most regressive views on cannabis in Arizona? NORML did not pull punches in calling them out.

Andy Biggs — currently a U.S. Representative running for re-election in Arizona's Fifth District — was given a solid F for his "prohibitionist streak" while serving in Congress. He has opposed efforts to decriminalize cannabis on a federal level and worked against medical marijuana research when he was an Arizona senator.

The only other sitting Congressman to score an F was, not surprisingly, Paul Gosar, who's running for re-election in the redrawn Ninth District, spanning much of the western side of the state. Gosar brags about being rated by the American Conservative Union Foundation as the most conservative lawmaker in Congress.

So his stance on cannabis is no wonder. For years, Gosar has opposed most federal initiatives to decriminalize cannabis or allow pot businesses to use banks. (Gosar's more moderate Republican opponent in the race, Adam Morgan, was given a solid B by NORML.)

Biggs and Gosar are joined in their F-grades by Kari Lake and Karrin Taylor Robson, the two Republican front-runners in the Arizona governor's race. Back when Proposition 207 was on the ballot, Robson was vocal in her opposition to legalization, calling it "bad policy for Arizona and dangerous for our kids."

Lake also opposed legalization at the time, and has claimed in the past that Red for Ed — a teachers' movement for better school funding — was a psy-op to get marijuana legalized.
click to enlarge

Rusty Bowers, Arizona House speaker and at times a relatively more moderate voice in Arizona GOP, also landed an F. NORML writes: "Bowers actually spoke to one of our board members regarding our survey. He simply stated that whatever we are for he is STRONGLY AGAINST. Got it."

Only 10 out of the 177 ranked candidates scored the highest ranking — an A-plus. Many got the high score due to their work on House Bill 2050, the failed legislation that aimed to open up the cannabis market and aid cannabis entrepreneurs who received their license through the state's social equity program.

The highest-profile of the A-plus candidates is Ruben Gallego, who is running for re-election to the U.S. House of Representatives in the newly redrawn District 3, representing Maryvale, Laveen, and parts of south Phoenix.
click to enlarge

Gallego has been an advocate for cannabis reform for years, on a state and federal level. He supported Propostions 205 and 207, ballot initiatives that attempted to legalize marijuana in Arizona. The latter succeeded. Gallego also has pushed for federal decriminalization of marijuana, co-sponsoring and voting for the Marijuana Opportunity Reinvestment and Expungement (MORE) Act, legislation that would remove marijuana from the Controlled Substances Act.

The highest-ranked candidates running for re-election in the Arizona Senate are: Democrats Juan Mendez and Raquel Terán, representing north Tempe and the West Valley respectively; and Rosanna Gabaldón, of District 2, which represents Nogales and a swath of southern Arizona.

Lake and Taylor Robson received Fs in the governor's race. But the Democratic front-runner for the next Arizona governor, current Arizona Secretary of State Katie Hobbs, did not fare much better — receiving a C-plus.

Hobbs has expressed vague support for Proposition 207 and legalization of medical marijuana, but has not been outspoken about the issues, NORML explained in its review of her record, while also commenting she never took an "active role" on cannabis during her many years in the Arizona House.

Current Attorney General Mark Brnovich, who is running for U.S. Senate, received a B from NORML on cannabis issues. Since Proposition 207 was passed, Brnovich has defended the law. And in 2019, New Times deemed him the "most marijuana-friendly official who's also a Republican." Since then, Brnovich has moved to the right after launching his Senate campaign.

The field of Republicans vying to replace Brnovich to become Arizona's next top prosecutor, however, all seem to have more regressive views. That's notable because the winner of the open seat would wield significant influence on drug and cannabis prosecutions in the state.

In 2020, Cooper was opposed to Proposition 207 and marijuana legalization — and even expressed her opposition to ballot initiatives, in general.

Abe Hamadeh, a former prosecutor for Maricopa County who now has Trump's endorsement in the race, did not receive a rating. Nor did the only Democratic contender, Kris Mayes.