From the Team Behind Cocktail Bars Baby Boy and Khla, Meet The Liar's Club

The crew that’s built a buzz – literally and figuratively – with its creative cocktail concepts Baby Boy and Khla will open a third downtown establishment, the Liar’s Club, this fall.

Sandwiched between Valley Bar and the Cornish Pasty Co. on Central Avenue, in the former home of Downtown Deli, the Liar’s Club will be a neighborhood spot with a cocktail program by Colton Brock and food by Tyka Chheng. 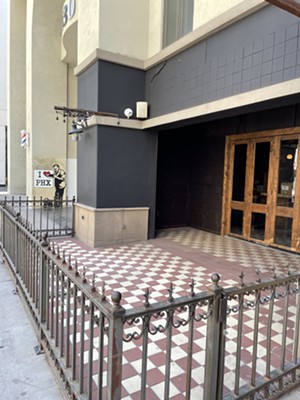 The Liar's Club will take over the former Downtown Deli space with an estimated opening date of September.
Sara Crocker
“It’s a downtown specialty cocktail bar where the food is not an afterthought, and at the same time it’s a local neighborhood restaurant where the cocktails aren’t playing it safe,” Brock says. “This intersection here is the bull’s eye of downtown Phoenix.”

Brock, Chheng, and John Sagasta comprise Misa Hospitality. The trio is partnering with Cobra Arcade Bar’s Ari Bracamonte on this project. The Liar's Club is an idea they’ve been thinking about since 2016, Brock says.

“We’ve always had this in our back pocket,” he says. “It’s been brewing for the last six years, smoldering in our heads.”

The idea behind the Liar’s Club is to highlight what makes us human, celebrating both the good and the bad.

“At the end of the day, we’re all humans with our own faults and secrets. We thought that was cool to celebrate that,” Brock says.

With service for lunch, dinner, and late night – they’ll have a DJ and dance floor in the back of the shotgun space, and will serve a limited menu at Valley Bar – Brock says the team is aiming for “a cool vibe that’s open to everyone." 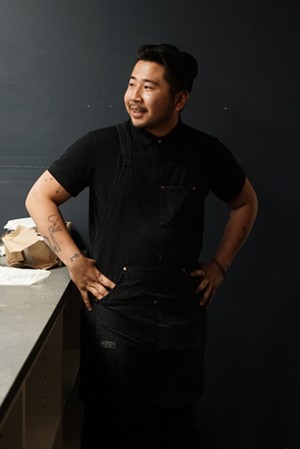 Misa Hospitality partner Tyka Chheng is returning to the kitchen at the Liar's Club, which will serve Detroit-style pizza and burgers.
Photo by Will Coles, courtesy of Misa Hospitality
As far as food, expect Detroit-style pizza, smash burgers, and bar snacks like shrimp cocktails and tots, all served in-house and for takeout or delivery, says Chheng, who worked in the culinary world before moving behind the bar.

“I wanted to make the menu approachable and super fun,” he says. “We’re doing everything from scratch.”

The dough and sauce will be scratch-made, along with burgers ground by hand.

For drinks, Brock is leaning on his extensive expertise in all things agave. There will be a section of the bar dedicated to those spirits, joining a selection of beer, wine, and cocktails. The cocktail menu will include drinks like a take on a Fernet and coke – an Argentinian highball that Brock is infusing with cherry, key lime, and vanilla.

Inside the deep, dark space, trophies line the rail above the booths. With a background in art, Brock is building an installation of “the trophies that none of us won.”

It is the Liar’s Club after all, so expect a few embellishments.

The exterior has a fresh coat of black paint, and you may see a sign claiming the Liar’s Club was established back in 1973. Above the bar sits Maximón, a Mayan folk saint who is a bit of a trickster and a degenerate, Brock says. 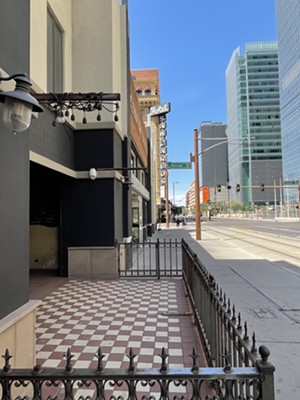 Situated in a historic part of downtown Phoenix, the Liar's Club will lean into that history, and make some embellishments of their own, says Colton Brock who is launching the bar and restaurant with Misa Hospitality partners Tyka Chheng and John Sagasta.
Sara Crocker
He’ll feel at home here, where, to play into the spirit of the place, each server and bartender will have a signature lie.

When asked if he’s got his lie sorted out, Brock hedges.

“I might just have a bunch of little white lies," he says.

Of course, there’s no way to be sure that’s true.