Matt Hennie
Hundreds of people received their first monkeypox vaccine during a clinic held by the Maricopa County Department of Public Health on July 21.
Hundreds of people received their first dose of the monkeypox vaccine last week during a clinic in Phoenix aimed at LGBTQ people at high risk for the virus.


Some 611 people were vaccinated during the three-hour walk-up window on July 21, according to the Maricopa County Department of Public Health. The free vaccine event at the county's STD clinic on East Roosevelt Street was the first of its kind for the health department.

The vaccine clinic was open to people who identify as gay or bisexual; cis or trans men; and trans women who have intimate or sexual contact with men, multiple anonymous partners or take part in sex work.


“They were moving through people really quick,” said Taylor Piontek, director of clinical services at Southwest Center, an LGBTQ+ health care clinic in Phoenix. “The process was pretty seamless.” He was among the people who received the vaccine at the clinic.

Maricopa County reported 21 confirmed cases and 14 probable cases of monkeypox as of July 22. The U.S. Centers for Disease Control & Prevention has confirmed 29 cases in Arizona and 2,891 across the country. Anyone is susceptible to the virus, but the CDC said monkeypox is having a disproportionate impact on “gay, bisexual, and other men who have sex with men."

Monkeypox is transmitted through skin-to-skin contact, prolonged face-to-face contact, or contaminated clothes or linens. The illness brings about a rash or sores, as well as fever, aches, swollen lymph nodes, chills, and exhaustion. It lasts about two to four weeks.


The first monkeypox case in the U.S. in 2022 surfaced on May 18 in Massachusetts, according to the U.S. Department of Health and Human Services. The first case in Maricopa County was announced in early June.

Local response to the virus has been limited due to national strains on vaccine supply. The U.S. Department of Health and Human Services reported distributing nearly 200,000 vaccines nationwide in recent weeks and is preparing another 800,000 vaccines for delivery this summer.


When the first case was reported in Arizona, the Maricopa County Department of Public Health received 100 doses of the vaccine and then an additional 334 doses that were used for people exposed to the virus, according to Sonia Singh, a spokesperson for the agency.


Maricopa County is one of the few entities with access to the monkeypox vaccine. The department recently received 1,200 doses to be distributed throughout Maricopa, Pinal, Gila, and La Paz counties, which prompted the recent clinics. 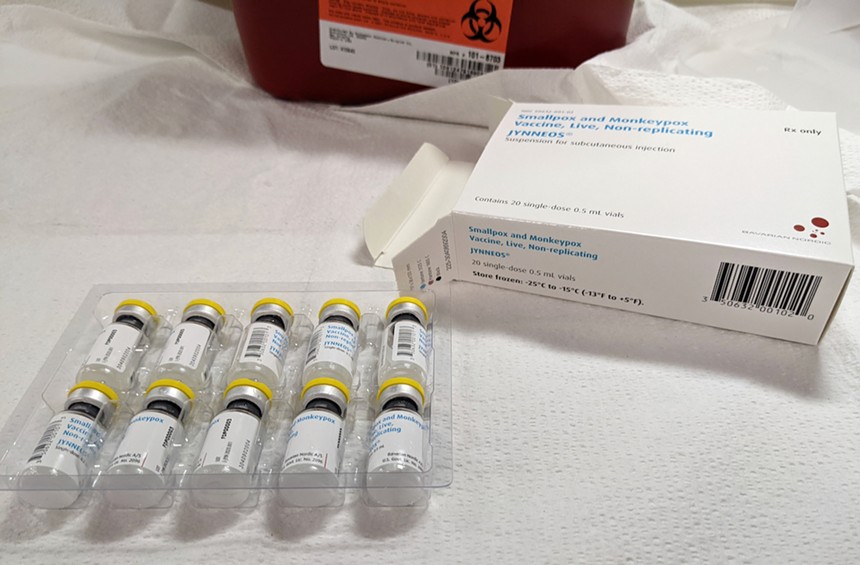 Hundreds of doses of a vaccine for monkeypox were doled out during a clinic in Phoenix for LGBTQ people on July 21.
Matt Hennie

'A Virus that Anybody Could Get'

Piontek said the Southwest Center has yet to see a patient with an active or probable case of monkeypox. But he's been briefing his staff about protocol for handling potential cases and looking into securing vaccines in the future.

Piontek added that the center, along with other LGBTQ health organizations and foundations, also has been involved in outreach and education on the virus.

Jimmy Thomason, executive director for Aunt Rita’s Foundation, an organization fundraising for and connecting HIV agencies across the state, said it’s important to focus on those most impacted, but he is especially concerned for further stigma against LGBTQ people, especially given the current political climate.


“Gay marriage is seen as such a scourge by so many that Congress in 2022 is voting on whether a man can marry a man,” Thomason said. “At the same time you were telling them to limit multiple partners. That's like telling somebody to quit smoking but you still don't deserve fresh air.”


Thomason stressed the importance of inclusive language when talking about monkeypox, such as using “us” and “we” pronouns.


“We're talking about a virus that anybody could get,” he said.


Equality Arizona, a statewide LGBTQ advocacy and policy organization, is closely monitoring monkeypox. Jeanne Woodbury, policy and communications director for the nonprofit, said it's important to focus on the medical aspects of how transmission works instead of the social aspects of who currently is being impacted most.


“It's really dangerous, not just for gay and bisexual men, people in the MSM community, but it's dangerous for people outside of that, if the perception is you can only get this if you are a gay man,” Woodbury said.