Saturday is National Mead Day, a holiday celebrating the nectar of the gods and the mortals who make it.

If you haven’t tried mead before – or if you've only seen it at a Renaissance festival – there’s more to the world’s oldest fermented beverage than its history.

A growing number of craft meaderies are popping up in Arizona and beyond, in an industry that has grown 650% since 2003, according to the American Mead Makers Association.

“It has definitely grown a lot,” says Superstition Meadery owner Jeff Herbert. “It’s a really exciting time to be a meadery.”

Herbert helms Arizona’s most recognized meadery, a project he's taken from hobby to career. He got interested in making mead after his wife, Jen, bought him a homebrew kit. They opened Superstition in Prescott in 2012. After their products rapidly collected awards and accolades, the duo opened a downtown Phoenix location in 2020. 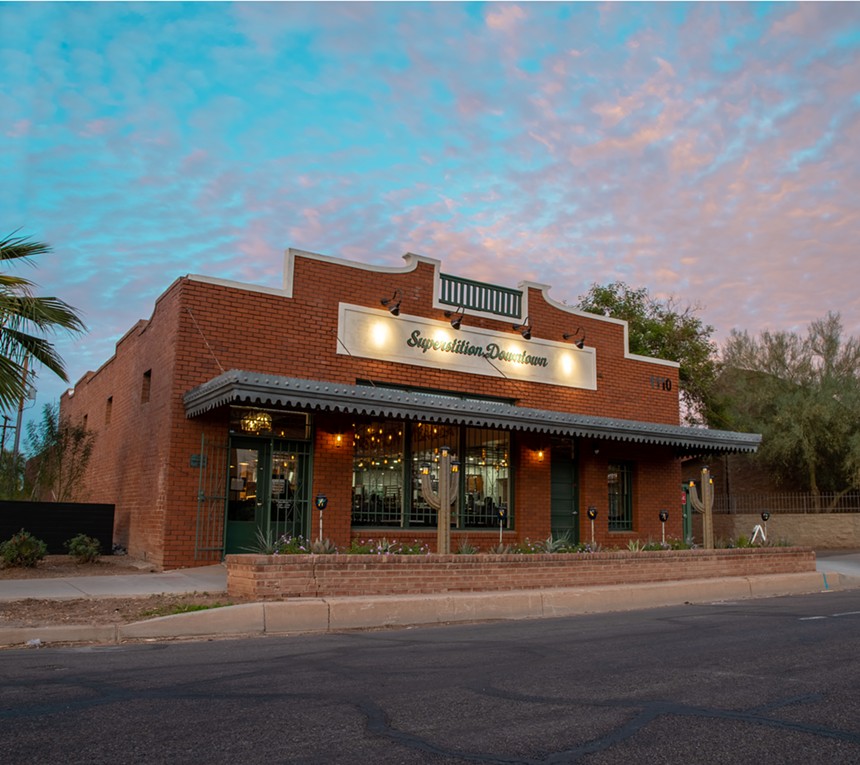 Superstition Meadery's downtown Phoenix location occupies the restored Jim Ong’s Market building at 11th and Washington streets.
Courtesy of Superstition Meadery
When asked about what people should expect when trying mead for the first time, excitement rises in Herbert's voice.

Superstition Meadery owner Jeff Herbert got interested in making mead after his wife, Jen, bought him a homebrew kit.
Courtesy of Superstition Meadery
“The first thing you have to accept is you’re entering a whole new world of flavor that you’ve never experienced,” he says.

Much like craft beer or wine, there’s a range of mead styles, from traditional mead made with honey, water, and yeast, to metheglin, a variety made with spices like cinnamon, nutmeg, and clove. Meads can be sweet or dry, still or sparkling, quickly fermented or barrel-aged for several years. They range from a sessionable 6 percent ABV to over 20 percent.

Mead also reflects the place in which it was made. Just as terroir can impact the taste of wine, even year over year, the location and plants bees interact with can change the taste of their honey, and thus, the taste of a mead.

For those new to mead, Herbert recommends starting with a traditional style and a melomel, a popular mead made with honey and fruit. Traditional meads are simply made with honey, water, and yeast, and can accentuate the floral, earthy notes of the honey.

“It’s simple in that it’s less ingredients, but it can be very complex,” Herbert said. With melomels, Herbert likes those made with berries. Superstition’s most popular is Marion, with blackberry, raspberry, and blueberry.

For National Mead Day, Superstition offers no shortage of different flavors to try. But metro Phoenix is also home to other meaderies brimming with honey wine waiting for you to take a sip. Some are offering special releases to mark the occasion. 
1110 East Washington Street
superstitionmeadery.com
Sunday - Thursday, 11 a.m. to 9 p.m.; Friday - Saturday, 11 a.m. to 10 p.m.
Superstition Downtown’s staff is getting into the spirit by dressing up in mead-related costumes, from Vikings to riffs on the imagery from Superstition's bottle labels. Any customer who does the same – here or at their Prescott location – will get 25 percent off any bottle or can of mead, which they can enjoy onsite or take home. In advance of the weekend, Superstition will release several special meads, including Chili Ragnarok made with mango and Hatch red chiles and Invisible Smile, a peach-flavored cyser style, which combines apple juice and honey. 
1050 North Fairway Drive, Building E, Suite 112, Avondale
scaleandfeather.com
Tuesday - Thursday, 4:30 to 8 p.m.; Friday, 4:30 to 9 p.m.; Saturday, noon to 9 p.m.; Sunday, noon to 4 p.m.
Scale and Feather will have two special releases for the holiday. Try the Fey Dark, a raspberry chocolate session mead, or the Knight of Everflame, an agave barrel-aged version of their award-winning Mantle of Whispers. It combines mesquite blossom honey mead with roasted Hatch green chiles and vanilla. Or, beat the heat in this medieval-inspired tavern with an orange blossom honey vanilla or raspberry flavored mead slushy. 
100 Easy Street, Carefree
celestialartisanmeadery.com
Tasting room reopens on Sept. 2
Celestial Artisan Meadery is the Valley's newest destination for honey wine, opening in February 2022. Their Carefree taproom is temporarily closed at the moment, but you can order their meads and ciders directly from the website or use their mead finder to locate stores, including Total Wine, that have it in stock. Taste the Tart Cherry Quasar or the Easy Street 101 Hard Cider. 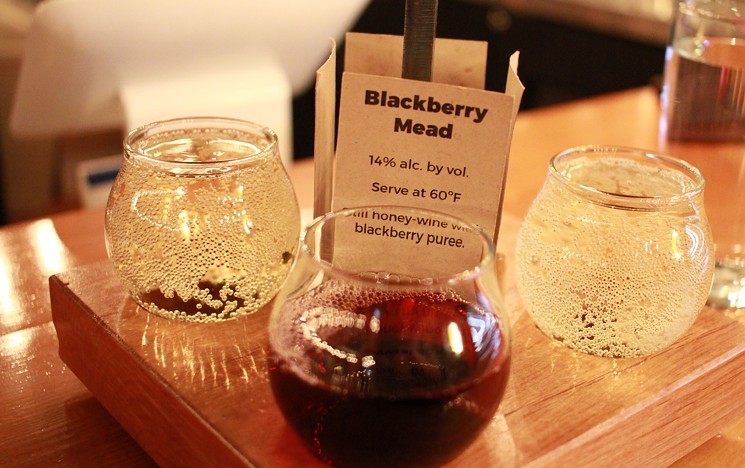 Visiting Arizona Mead Company is like being in your homebrewer friend's basement.
Allison Trebacz


6503 West Frye Road, No. 12, Chandler
azmeadco.com
Friday, 5 to 9 p.m.; Saturday, 3 to 9 p.m.
At Arizona Mead Company you can sip chilled meads from the bottle, along with kombucha and cider on tap. While they won’t be doing any special releases for Mead Day, they are open on Friday and Saturday, so you can tuck into their cozy space or order ahead and pick up.