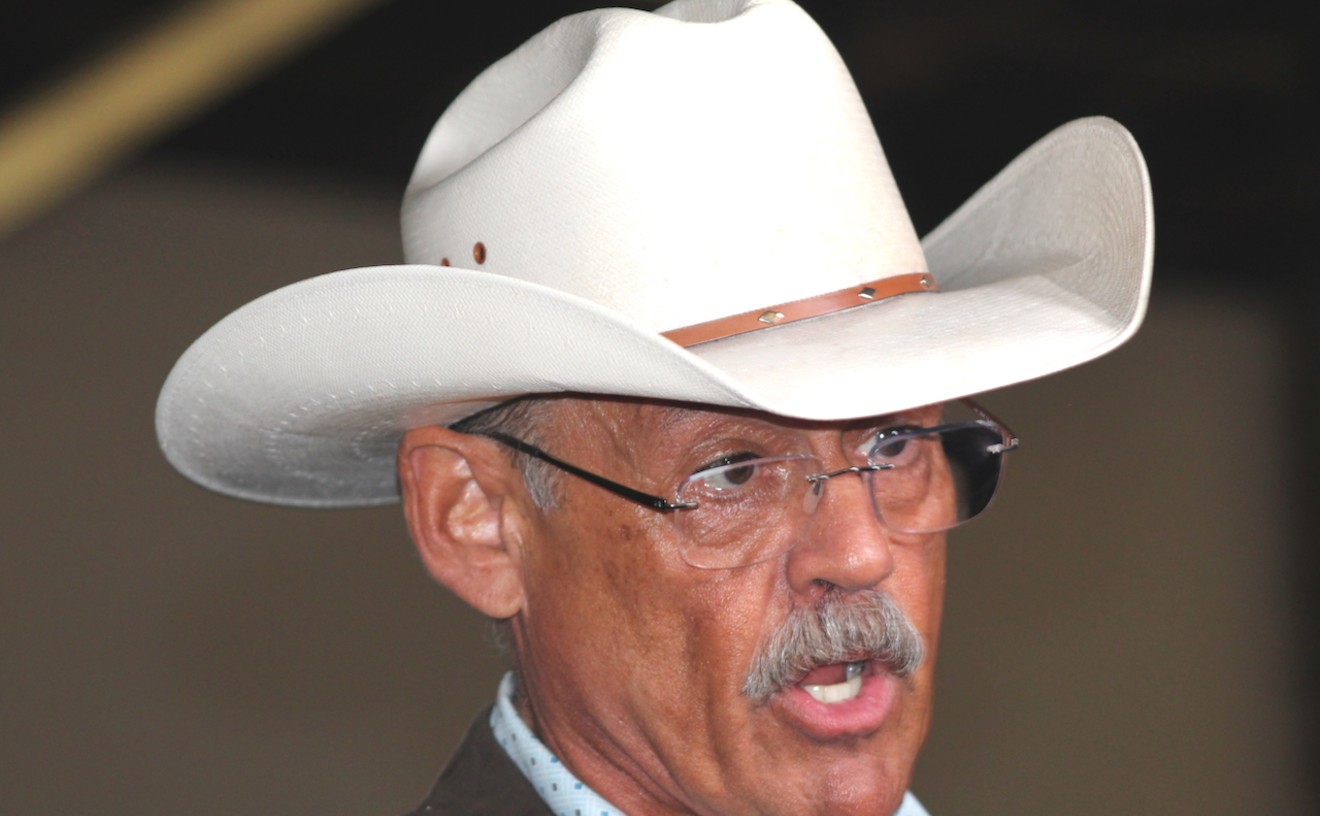 Elias Weiss
Arizona State Representative and conspiracy czar Mark Finchem is one step closer to running elections in the state after winning the GOP primary for secretary of state.
Tuesday's primary elections were a litmus test for the direction of Arizona Republican Party. Former President Donald Trump, and his slate of favorite "Stop the Steal" election-deniers and conspiracists, won or were winning. Fealty to the truth lost.

Across the board, MAGA candidates in Arizona who cling to the fantasy that significant, widespread voter fraud cost Trump in 2020 were leading. Those that stood up to the facts — that cases were isolated — were losing.

Candidates who plotted to thwart Arizona voters were winning. Those that stood up to them lost.

It was, pundits pointed out, an apt metaphor for the growing schism in the Arizona GOP between the old-school, more moderate conservative wing and the "new right" that includes election deniers, fake electors and people at the U.S. Capitol for the January 6 attack.

The governor's race was still too close to call Wednesday morning. While early results seemed to indicate that Taylor Robson held a strong lead over Lake, later batches of votes gave Lake an edge. By Wednesday morning, Lake was up by two points, with 80 percent of the vote reporting. By Wednesday afternoon, Lake was claiming victory, with no basis. The winner of the GOP primary will face Democrat Katie Hobbs.

Nearly two years after the 2020 election threw Phoenix and Maricopa County into the national spotlight, the specter of election fraud claims and the Arizona Senate's partisan ballot review loomed large. Last month, Maricopa County Sheriff Paul Penzone said he would deploy plainclothes deputies to polling places and that the agency would be on high alert for security threats.

Despite underlying tensions — and the stakes of the primaries — polling locations visited by Phoenix New Times on Tuesday were relatively quiet.

At Burton Barr Central Library and several other polling places in Phoenix, no sheriff's deputies were in sight. At the Academies at South Mountain, a cheerful security guard sat at the parking lot entrance, armed only with a big orange water cooler. A steady stream of voters braved 100-degree heat to cast their ballots.

Still, voters who spoke with New Times said they felt a growing polarization with this election season. Wright Mier, 47, of Scottsdale, said that the differences between the candidates on the ballot felt "starker" this year. He saw this in disparities "over what happened in the last election, what's being done in schools," he said. Meir's focus was on the school board race, which, particularly in Scottsdale, has been extremely contentious.

It was also quiet Tuesday evening as ballots were counted at the Maricopa County Elections Department in downtown Phoenix. Temporary fencing was installed around the building, and sheriff's cruisers sat nearby. But no protesters were present.

“For federal elections, we always have increased security,” Gilbertson added. “We have a great partnership with the Maricopa County Sheriff’s Office.”


Here's a look at some of the key races decided in Arizona last night:

Mark Finchem, currently a state representative for District 11, Casa Grande, is arguably Arizona's preeminent election denier. Finchem has called himself a member of the militia group Oath Keepers and described the violent 2017 white power rally in Charlottesville, Virginia, a "psy-op," psychological operation. Most recently, New Times found that Finchem fell for a completely unsubstantiated tip about election fraud back in 2020.

Now, Finchem, who attended Trump's January 6 "Stop the Steal" rally, is one step closer to running elections in Arizona. He decidedly won the Republican nomination for secretary of state. Preliminary results show Finchem leading easily, with challengers businessman Beau Lane, Arizona State Representative Shawnna Bolick, and Arizona State Senator Michelle Ugenti-Rita splitting the rest of the vote. All three are conservatives, but they're more moderate than Finchem on election policy.

Finchem, after all, was at the heart of the plan after the 2020 election to replace legitimate electors for Joe Biden with bogus self-appointed ones to overturn the state's election in favor of Trump.

Finchem will face either Democrat Adrian Fontes, former Maricopa County Recorder, or Arizona State Representative Reginald Bolding. The winner of the Democratic race was too close to call as of early Wednesday afternoon.

Masters was handpicked to run for Arizona Senate — and challenge incumbent Democrat U.S. Senator Mark Kelly — by Peter Thiel, the founder of PayPal and a major funder for a new wave of conservatives in Republican politics. Masters also won Trump's endorsement.

Masters is a proponent of far-right border policy, has hinted that he would support overturning the right to contraception, and has blamed gun violence on "Black people, frankly." These views were not a shortcoming in the election, it seems. Early results show Masters won every county in the state, save for Gila County, where Lamon had a narrow lead.

Andy Biggs, Paul Gosar Have Easy Path Back to Congress

Arizona's most conservative members of Congress — Andy Biggs, representing Gilbert and Chandler, and Paul Gosar, representing much of the rural western reaches of the state — look as though they are headed back to Congress.

Biggs, who was subpoenaed by the House committee on January 6 for asking for decertification of Arizona's 2020 vote, ran unopposed in the primary for Arizona’s fifth congressional district. He will face Democrat Javier Ramos, a tribal lawyer from Phoenix. Ramos also ran to unseat Biggs in 2020, but lost the Democratic primary.

Both were key figures in the fake elector plot and let the efforts on the floor of Congress on January 6, 2021 to reject the will of Arizona voters in the 2020 presidential election. Both sought presidential pardons from Trump before he left office.

In the scope of the Arizona GOP, State Senator Kelly Townsend of District 16 (Apache Junction) falls on the more extreme end of the political spectrum. But when redistricting forced Townsend into the same district as fellow state senator Wendy Rogers of District 6 (Flagstaff), it was clear that it would be a difficult race.

Rogers, by crusading about "fraud" in the 2020 election and calling for nationwide audits, has built a national following — and raised record millions in the process. Townsend struggled to keep up with her opponent's fundraising.

Rogers was censured by her colleagues in March for hateful and bigoted comments, and was unapologetic. Still, she beat Townsend easily in the race in the newly redrawn District 7, which spans a large stretch of western Arizona, from San Tan Valley to Flagstaff. She will face Democrat Kyle Nitschke, who ran uncontested in the Republican-leaning district.

Arizona House of Representatives Speaker Rusty Bowers, of District 25 (Mesa), paid the price for his staunch opposition to 2020 election fraud claims. Bowers was censured by his colleagues in July for being outspoken about the absence of evidence for election fraud back in 2020. He was a star witness in the federal hearings over January 6, testifying about the threats he had received for his stance on the fraud claims.

This, apparently, did not help his popularity with GOP voters.

Bowers lost his bid for the Arizona Senate District 10 seat to opponent David Farnsworth, a former Arizona state senator in District 16 (Apache Junction). Preliminary results show Farnsworth beating Bowers by nearly 30 points. Farnsworth was backed by Trump (and has claimed that the devil stole the 2020 election from the former president).

Anthony Kern, who was at the U.S. Capitol on January 6 and was fired as a cop for dishonesty, is poised to become a lawmaker once again in Arizona, after winning the Republican nomination for state senator in the new District 27 (Peoria). Early returns show Kern winning in a landslide over Republican opponent Jamie Kelly, a former nonprofit consultant.


The lone Democratic contender in that district is Brittani Barraza. She ran as a write-in candidate in the primary, but will be on the ballot in November.

Queen Creek Republican State Representative Jake Hoffman, a fake elector who was subpoenaed by the Congressional January 6 Committee, will be nominated without opposition to run for the state senate. Hoffman and his company Rally Forge were banned from Facebook and Twitter for creating "troll farms" and pushing false information, according to widespread media reports.

He will face Democrat Alan Smith in the race for the District 15 seat, representing the Queen Creek area. After the 2020 redistricting, District 15 was one of the least competitive seats in state senate, according to data from the Arizona Independent Redistricting Commission. It leans overwhelmingly Republican.

Several races remained too close to call on Wednesday afternoon, including the governor's race — which seemed to be the main interest of voters.


"It's very, very important to me," said Terry Downing, a voter who dropped off her ballot Tuesday morning at the library.

Downing, a teacher in her 50's who lives in the West Valley, is a Republican and a fan of Taylor Robson. Kari Lake had not swayed Downing; she found the former newscaster to be "nothing but a bunch of hot air."

Trump's glowing endorsement, Downing said, didn't do much to redeem Lake in her eyes. She didn't trust that Lake would act on her claims to crack down on the border, she said, while she trusted Taylor Robson to do so.

William Proctor, of Phoenix, stopped to chat with New Times outside the school. He, too, was preoccupied by the governor's race. "Kari Lake is an actor," he said, adding that she had "no skills in government."

Proctor, a Democrat, said he was impressed by Hobbs. Her position as secretary of state gave him confidence in her skill set. Did she have a shot at winning against one of her firebrand Republican opponents? "Heck yeah," he said.

Other undecided races include former "audit" liaison Ken Bennett's bid for the Republican nomination for Arizona Senate in District 1 (Prescott). Bennett was a key figure in the GOP-funded and widely ridiculed sham Cyber Ninjas' audit of Maricopa County ballots in the 2020 election.


According to Gilbertson, the final tallies would be confirmed on August 9, the last day a ballot can be ”cured” if a signature is under question.