Elias Weiss
Phoenix-based PetSmart's more than 1,600 stores include this location at Camelback Road and 20th Street.
Workers concerned about their wages and benefits, work environment, staffing, and the care of animals inside the stores of Phoenix-based PetSmart are increasing their pressure for change.

United for Respect, a national nonprofit worker advocacy group, is expected to unveil a new billboard as soon as Tuesday on Interstate 17 near Union Hills Drive, close to the company's headquarters. The billboard features a dachshund urging corporate executives to make a tough decision: “Wall Street Greed or PetSmart Associates?"

Organizers of the campaign want to force the company to meet with workers to address their concerns. Store employees are seeking a $15 hourly minimum wage, a safer work environment, healthcare benefits for all employees, increased training, equipment upgrades, job protections, and worker representation on the board of directors.

Last Wednesday, more than 400 employees and supporters signed a letter to Joanne Dwyer, PetSmart's vice president of corporate social responsibility and sustainability, who joined the company in the newly created role in May.

"Our stores are in crisis," workers wrote in the letter. They asked Dwyer to invest more in PetSmart's staff and reclassify the business as a live animal care center, not a retailer. The letter also noted that last month PetSmart faced a class-action lawsuit after groomers in California alleged they were deceived and trapped in debt after completing the company's training program. That lawsuit is pending.

“We've been pushing PetSmart to put pet care over profit for more than two years, but we haven't seen meaningful changes even as our paychecks get stretched thinner,” the letter continued.

The calls for change at the company, which employs about 56,000 people across more than 1,600 stores in the U.S., Canada, and Puerto Rico, could be a prelude to unionization efforts.

Phoenix New Times recently spent time talking to union leaders and rank-and-file workers about the unprecedented wave of union efforts in Arizona, championed by fed-up employees in a broad spectrum of industries — from cannabis and coffee to Phoenix Sky Harbor International Airport.

A new billboard on Interstate 17 near Union Hills Drive urges Phoenix-based PetSmart's corporate executives to address calls for improvements at the company.
United for Respect

'There's A Lot of Death'

Oscar Cordaro has always loved animals. Naturally, he was pretty excited when he got a day job at a PetSmart store in metro Phoenix. It did not take long for that excitement to dwindle.

The atmosphere was zoolike on a recent Sunday at the store where he works. Cordaro said he was stuck working alone, grappling with the urge to succumb to burnout. That’s when three tropical birds dropped dead in their cages on the sales floor.

“The animals don’t get the food and water that they need because I have to help customers,” Cordaro, 25, told New Times. “It is exhausting.” When Cordaro is behind the cash register, he can't tend to the hundreds of animals inside the store.

Moments later, it was a pair of hamsters. The animals were healthy when they arrived at the store days before. Then, suddenly, they were dead, he said.

Cordaro said he has to ring up customers and “do the jobs of three other people" on those frenzied and lonely Sundays. He needs to drive nearly an hour each way to Phoenix to dispose of the dead animals, but there’s no time for that in the day.

As a result, coolers — which also contain food for live animals — overflow with corpses.

According to the company’s “deceased store-owned pet policy,” which Cordaro shared with New Times, deceased animals are to be wrapped in paper, then in plastic, sealed with rubber bands, and packed into a refrigerator or freezer.

“Deceased pets must never be left in the refrigerator for more than 24 hours,” according to the policy.

Because of staffing issues, these mandates are too often ignored, workers claimed.

A spokesperson for PetSmart said the allegations “do not represent our 1,660 stores" and do not reflect the "associates who give so much of themselves to care for all pets as if they were their own.”

“This is just the latest in a series of misleading assertions that United for Respect has made toward us and other retailers,” Christina Grant-Backus, PetSmart's corporate reputation manager, told New Times. “Our associates have several avenues to connect with us and ask questions or voice their opinions.”

These resources include access to store leaders and human resources, as well as an anonymous CareSmart hotline, which is operated by an independent third party, Grant-Backus added. 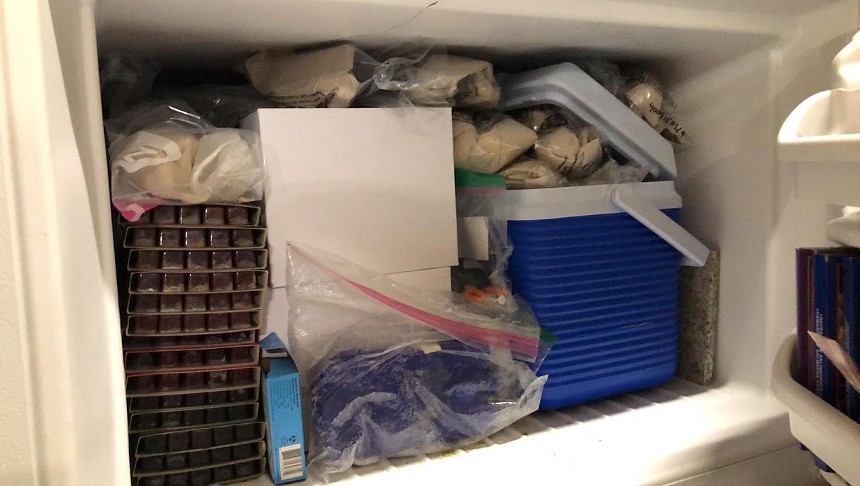 A freezer at a PetSmart in Arizona is stuffed with dead animals in plastic bags. Overflowing from their designated cooler, the deceased pets are stored next to food for living animals.
United for Respect

Dogs are dying in greater numbers every year at PetSmart stores, according to a 2021 report from United for Respect. The report detailed PetSmart’s troubles navigating the coronavirus pandemic, maintaining decent working conditions, and countering the rise in pet deaths.

Nationwide, dog deaths at PetSmart stores have more than doubled since BC Partners, a London-based private equity firm, acquired the company in 2015. At least 36 dogs have died since 2015 while receiving care at PetSmart or shortly thereafter. Between 2008 and 2014, only 15 dogs died while in PetSmart’s care, according to the report.

An additional five dogs died recently while in PetSmart custody or immediately after, including a poodle that allegedly was strangled during a grooming session in Pennsylvania and a bulldog that was crushed under a grooming table in Las Vegas, according to the report.

“Workers are discouraged from taking sick animals to the vet so they can keep costs down,” Bianca Agustin, United for Respect’s director of corporate accountability, told New Times. “They [PetSmart executives] just want them to die, and then they put them in these freezers.”

In North Carolina, 20 PetSmart stores were recently ordered to “improve conditions for animals in order to comply with the state’s Animal Welfare Act," according to People for the Ethical Treatment of Animals.

According to another report from NJ Advance Media, a New Jersey-based media and data company, some PetSmart employees “felt either ignored or retaliated against when they spoke up about safety concerns or wrongdoing by colleagues.”

Feeling pressure not to bail on his job, Cordaro remains on PetSmart’s payroll. “I like my coworkers, and I need to work,” he said. He said he hopes conditions will improve soon and wants it to be “a little less stressful for the rest of us.”

“Workers are discouraged from taking sick animals to the vet ... They just want them to die." — Bianca Agustin, Director for Corporate Accountability, United for Respect

There is also “a distinct effort” to unionize among afflicted workers, Agustin said. “We wholeheartedly support everyone’s right to organize," she added.

Formal conversations about unionization have yet to take place as workers continue to see if recent efforts make a difference. In June, Agustin and two associates flew to the New York City offices of BC Partners.

“We left that meeting feeling hopeful,” Agustin said. “We really wanted to give the company the benefit of the doubt so things would get better. Unfortunately, that didn’t happen.”

Now, Arizona PetSmart workers are escalating their campaign to take on the company right in its own backyard.

“The company leadership is based in Phoenix, and they ultimately have a responsibility to address these concerns,” Agustin said. “We want to give them that opportunity to do that in their own backyard. It’s time to bring some corporate responsibility to PetSmart.”

In her statement to New Times, Grant-Backus said the company is listening.

“We are committed to asking questions, listening, and taking action to ensure PetSmart continues to be a place where associates are valued and pets receive the highest standards of care in our industry,” she said.