They Started Making Mozzarella at the Farmers' Market. Now, These New Yorkers Have Their Own Restaurant

Little Italy of Scottsdale started when Brandon and Michele Gioffre, New Yorkers who moved to Arizona with their three daughters in 2019, were in search of a taste of home.

When the Gioffress went out, they weren’t finding their favorite East Coast-style Italian dishes nor could they track down some ingredients to cook at home. Michele asked family members to ship things from Italian grocers in their home state.

When they would make their own recipes, the Gioffres quickly found themselves feeding many of their friends and neighbors. Creating a gathering place is something the Gioffres are used to, and love.

“We were always cooking, throwing parties, everything was always at our house,” Michele says of their home in New York.

Brandon adds,“We love that. We always have an open door."

Since moving to the Valley, the family has frequented the Uptown Farmers Market. Strolling through the vendor stands sparked an idea. Why not set up a tent to share some of their family’s favorite cooking and bring East Coast-style Italian food to Arizona?

“We saw a huge hole in the market,” Brandon says of the Phoenix dining scene. “Everything is Chicago-style or West Coast Italian, nothing that could represent what we’re used to every day.”

They secured a spot at the farmers' market and launched in November 2021 with hand-made mozzarella. At their tent, the duo showed shoppers how the cheese is made, stretching the curd with a wooden spoon, giving the mozzarella its characteristic, springy, stringy texture.

“It is an experience,” Brandon says. “When you taste that fresh mozzarella when it’s just pulled, [there's] nothing like that.”

The show, plus the opportunity to taste the fresh cheese, created a buzz. Buoyed by social media posts from Arizona food influencers, lines at their tent stretched throughout the market.

“People were coming from all over – Mesa, Tucson, New Mexico – because they saw us online,” Michele says.


Little Italy of Scottsdale started selling offerings to complement the mozzarella, from focaccia and arancini to pesto, red sauce, and caponata. As the stand's popularity continued to grow, the menu expanded to include breakfast sandwiches and pizzas, and sweets like zeppole and cannoli. 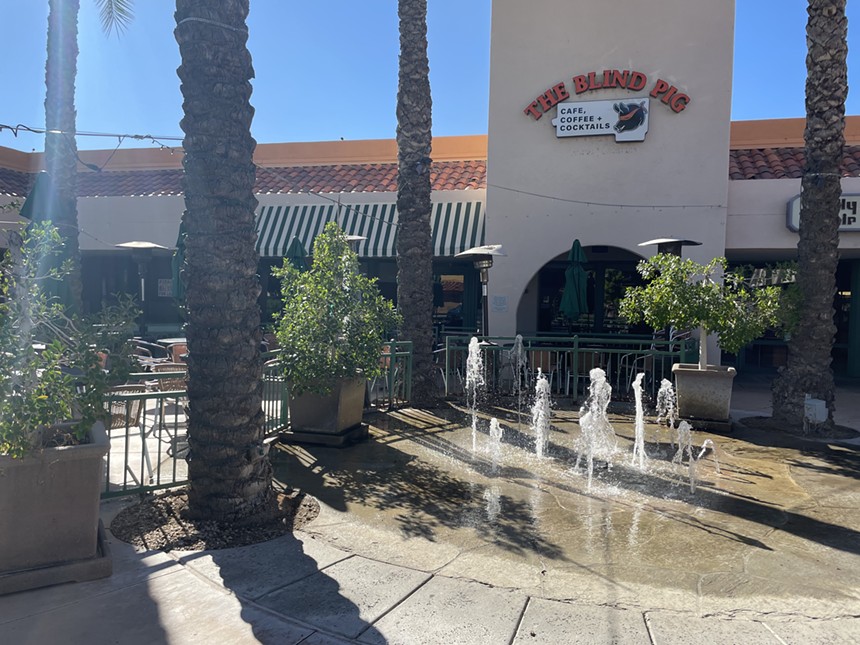 The Blind Pig is now owned by the group behind Little Italy of Scottsdale.
Sara Crocker
When the opportunity to buy The Blind Pig came up in August, Brandon and Michele jumped at it. The Gioffres, with co-owner Ken Danielson, closed on the Scottsdale restaurant on August 22 and reopened it the next day. The original name and some of the menu will remain, but new menu items – like an Italian Benedict and farmers' market staple Tuscan eggs on toast – are being added as the couple makes it their own. The Blind Pig will also begin offering a cocktail hour with charcuterie and spritzes, along with dinner service starting this month.

“We treat [the restaurant] like it’s our home and when people come in, we want them to experience the hospitality, outstanding service, outstanding food. and just be a part of our family,” Brandon says.

When renovating the restaurant, the Gioffres decided to leave up a gallery wall of Valley city maps, with a map of the entire state of Arizona at the center.

“I like to look at that and say, that’s our roadmap to where we want to be,” Brandon says.

The Gioffres hope to open delis that will feature the Italian staples they sought out when they first moved here. At The Blind Pig, customers will also be able to pick up grab-and-go Italian foods.

Brandon and Michele credit co-owner Danielson, their executive chef Vincent Contreras and the rest of their team for making it possible for them to expand as fast as they have over the past year.
“We like to call ourselves hospitality assassins,” Brandon says. “We have a lot of plans. We’re building a really solid team.”


The owners' plans also include growing their catering business and presence at other farmers' markets across the Valley.

“The passion is in our blood for Italian food and cooking,” Brandon says. “We’re super excited. When we see people enjoying it the same way that we do, that’s the best.”