Your last chances to see Elton John perform in the Valley are happening this weekend when the Rocketman brings his Farewell Yellow Brick Road tour to Chase Field for a two-night stint. Tickets to either show are pricey, but his legendary status might help justify the expense.

Read on for more details about each show or visit Phoenix New Times’ concert calendar for even more live music in the Valley this weekend. 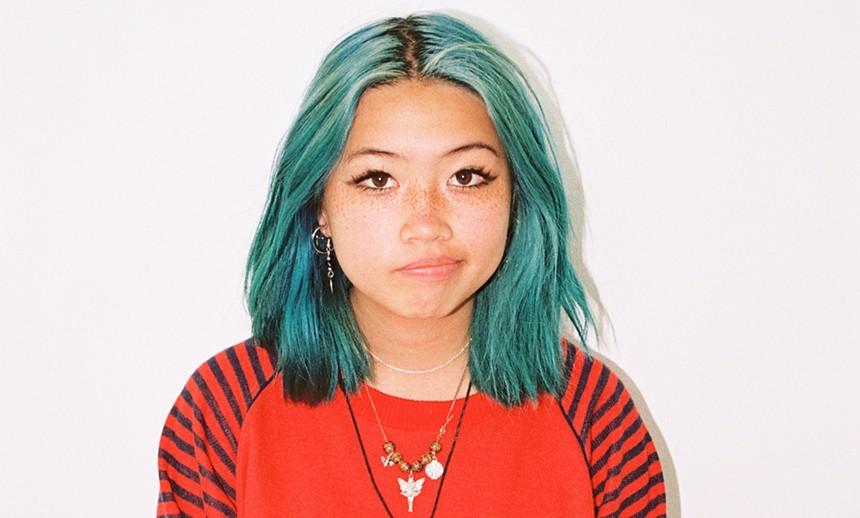 Friday, November 11
The Van Buren, 401 West Van Buren Street
The dream of the ‘90s is alive in beabadoobee’s Bea Kristi. The 22-year-old singer-songwriter crafts evocative bedroom pop songs out of the detritus of the grunge rock era, creating freshly modern songs that nevertheless recall the heyday of MTV's Buzz Bin. She isn't shy about acknowledging her influences: her breakthrough song is called "I Wish I Was Stephen Malkmus," after all. Like the Pavement frontman, Kristi has a knack for solid gold hooks and witty turns of phrase. On her latest album, Beatopia, she branches out into new sonic territory with crunchier riffs, bossa nova rhythms, and even a bit of emo on “Pictures of Us.” Collaborating with a group of artists that include The 1975, Jock Strap's Georgia Ellery, and PinkPantheress, Kristi sounds more like a communal effort than 2020's Fake It Flowers. One thing that hasn't changed is her keen insights into being an outsider: depression, heartbreak, and feelings of profound alienation populate the songs on Beatopia. It’s in this way that beabadoobee is keeping the spirit of the alt-’90s alive by being a blissful bummer. 8 p.m., $65 via livenation.com. Ashley Naftule 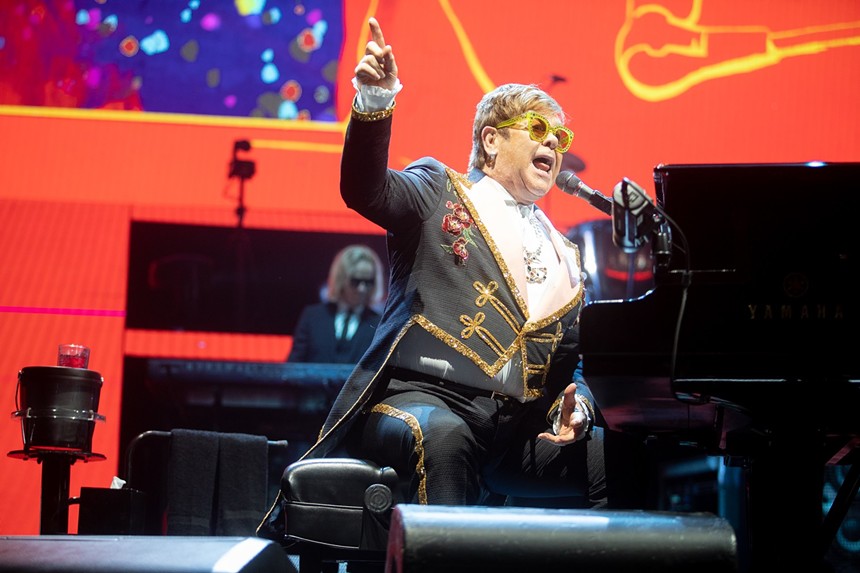 Elton John is bringing his farewell tour back to the Valley.
Jim Louvau

Friday, November 11, and Saturday, November 12
Chase Field, 401 East Jefferson Street
Earlier this week, Disney+ announced it will stream Elton John’s final US concert live from Dodger Stadium later this month, helping allay any FOMO being felt by anyone who can’t pony up the dough for his two-night stint at Chase Field this weekend. That being said, it’s worth the money to see the legendary musician perform live and in person. Barring any further extensions of his Farewell Yellow Brick Road tour (now in its fifth year), both gigs are your last chance to see John perform in the Valley. They’re also going to be phenomenal concerts. If you didn’t attend the first time the tour swung through town in 2019, it's a two-hour-plus retrospective spanning his lengthy career with close to two dozen of his biggest hits being performed. Depending on which reseller you hit up, tickets will run between $75 to $200 per person but will be worth every penny. Trust us. 8 p.m. Benjamin Leatherman 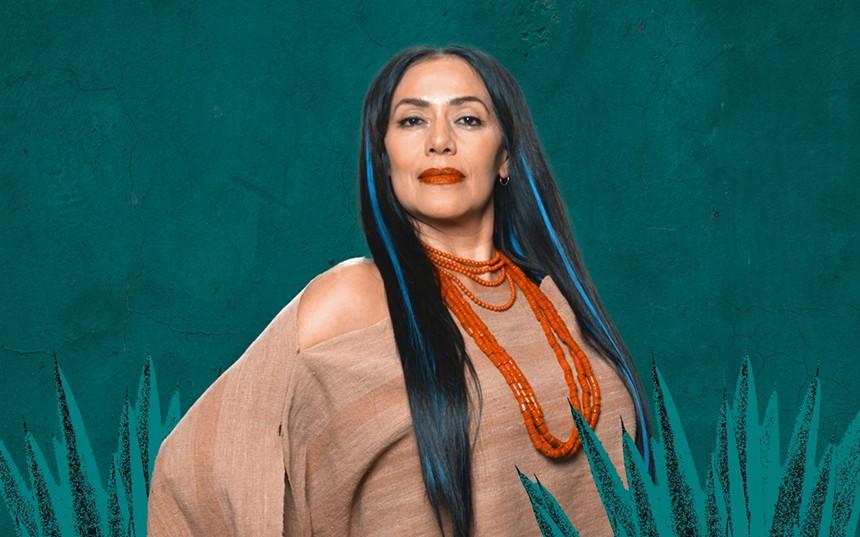 Saturday, November 12
Mesa Arts Center, 1 East Main Street
Before she became a world-renowned six-time Grammy winner, Lila Downs followed The Grateful Dead. While she had already picked up the performing bug in school, learning how to sing traditional and pop songs with trilingual ease (Downs can speak Spanish, English, and Mixtec fluently), she didn’t really begin seriously pursuing music until after going through the time-honored American rite of passage of dropping out of college to follow the Dead around. Eventually, she found herself in Oaxaca, where she met her future musical partner/husband Paul Cohen, and the rest is musical history. Stylistically, Downs drinks from a deep well of influences. In addition to singing covers and writing original songs in the style of traditional Mexican and Oaxacan folk music, she also draws on country, jazz, blues, bolero, flamenco, cumbia, and norteño. She’s paid tribute to her influences with stirring covers of songs by Woody Guthrie and Santana. Most of all, aside from the high-energy and celebratory vibes of her live shows, Downs is known for her outspoken activism on behalf of indigenous people and her pride in her Miztec heritage. She gives voice to those history has silenced with her sumptuous, yearning songs. 8 p.m., $35-$60 via mesaartscenter.com. Ashley Naftule 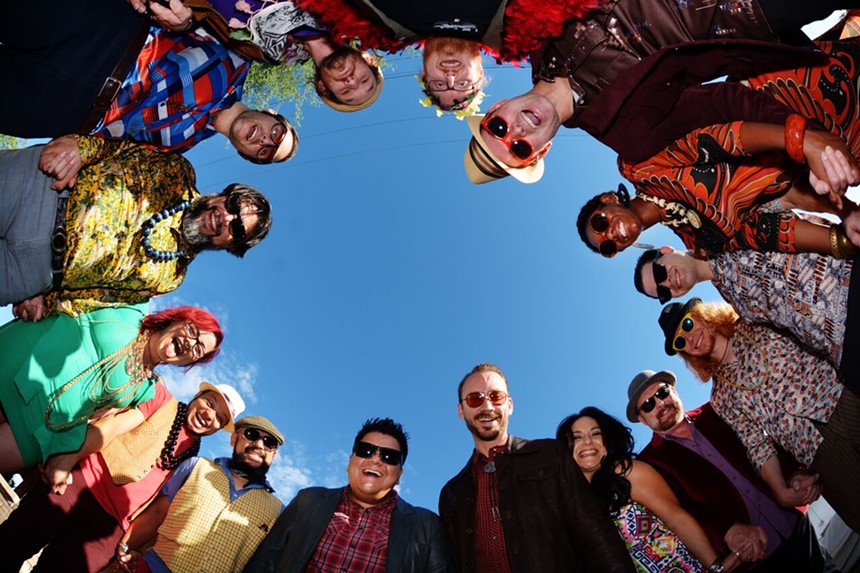 Saturday, November 12
Coronado Park, 1717 North 12th Street
During these divisive times, community gatherings can create connections that give people hope. In the Coronado neighborhood of Phoenix, those gatherings include WayneFest, a micro-music festival that helps to fund neighborhood projects such as little libraries, murals, a community garden, and more. This year’s festival takes place on Saturday and features live music by several bands and artists, including jazz/soul/funk ensemble Phoenix Afrobeat Orchestra, geek rapper Mega Ran, Americana act Of Kith and Kin, indie/art rock band Fairy Bones, and "one-man sound machine" Running Thread. Four Peaks Brewery will have a massive beer truck at the event, a lineup of local food vendors will have a variety of eats available for purchase, and local artists like JJ Horner and Tara Sharpe will perform live painting sessions. 4 p.m., $20 for adults and $5 for kids 5-12 via eventbrite.com. Lynn Trimble

Saturday, November 12
Sunbar, 24 West Fifth Street, Tempe
The music of Asaf Borger (better known to electronic dance music fans as Borgore) is provocative and downright filthy. Throughout his career, the Israeli-born DJ/producer has crafted tracks peppered with expletives and coated with quite possibly the grubbiest dubstep bass in existence. It's called "gorestep," and it's a mix of dubstep depravity laced with Borger's libertine-like affinity for heavy metal hooks (he's the veteran of hard rock band Shabira) and hip-hop raunch. It's so filthy that taking a shower after listening might be necessary, especially if you've been grinding away to Borger's tracks amid a sweaty mass of grinding clubgoers. Borger not only embraces the decadent nature of his music, he revels in it. And dubstep fans have dug his stuff over the past decade. Experience it for yourself this weekend at Sunbar in Tempe. With Mike Dao, Bigstabes, Claire Voyant, and Turbo; 9 p.m., $24.50 via tixr.com. Benjamin Leatherman

Saturday, November 12
Chandler Center for the Arts, 250 North Arizona Avenue
“Like I was swimming in a sea of soul,” Marc Broussard sings on “Home,” one of the Louisiana native’s signature songs. “Home” offers a tight summation of Broussard’s “Bayou Soul” sound: a seasoned gumbo of R&B, funk, blues, and Southern rock. His sound isn’t smooth so much as it is thick, swampy, the kind of sound you can splash around in. Swampy boogie blues is in Broussard’s blood. The son of Boogie Kings guitarist Ted Broussard, this Boogie Prince has made a name for himself with a string of down-home strum-and-funk albums. Longtime basketball heads might recognize Broussard’s "Must Be The Water" as part of the NBA’s regular rotation of get-hype songs in the late 2000s. In addition to writing his own Bayou Soul tunes, Broussard also loves covering soul classics by icons like Stevie Wonder, Otis Redding, and The Staple Sisters. Even if you’re not familiar with his original compositions you’re bound to hear a few covers that you’ll want to swim in when he plays the Chandler Center for the Arts this weekend. 7:30 p.m., $32-$52 via ticketmaster.com. Ashley Naftule

Sunday, November 13
Celebrity Theatre, 440 North 32nd Street
Let’s face it: the stars have looked very different since David Bowie shuffled off the mortal coil. In the six-plus years since the legendary musician departed the surly bonds of his Earthly existence have been filled with tumult, strife, and division. While there’s no conceivable way to bring Bowie back to help set the world right, humanity can at least cherish his life, legacy, and amazing catalog of music. The latter is the M.O. of the Celebrating David Bowie tour, which features a roster of rock ‘n’ roll all-stars — including Hall of Famer Todd Rundgren, Angelo Moore from Fishbone, Spacehog’s Royston Langdon, and former Bowie guitarist Adrian Belew — performing some of his biggest hits. Around 30 of Bowie’s biggest songs from multiple eras of his career will be played during this show, ranging from early favorites like “Space Oddity,” “Life on Mars,” and “Rebel Rebel” and such signatures as “Let’s Dance” and “Heroes” to later tracks like “I'm Afraid of Americans” and “Hallo Spaceboy.” 7:30 p.m., $40-$100 via etix.com. Benjamin Leatherman