Editor's note: This story was updated on November 16 to reflect the restaurant's correct hours.

Gastromé Market opened in September, bringing a well-curated collection of gourmet goodies to Gainey Ranch in Scottsdale. The upscale marketplace quickly established itself as a place where people with great taste can go to buy things that taste great.

Its small but sophisticated inventory includes jars of local and imported ingredients such as jams, olive oils, and balsamic vinegars along with daily deli items, fresh bread, and a concise yet eclectic wine collection. An artisan meat and cheese counter rivals anything in the Valley. If you’re shopping to impress, whether it’s for a host gift, romantic dinner at home, or holiday party spread, you likely can’t do better than this. 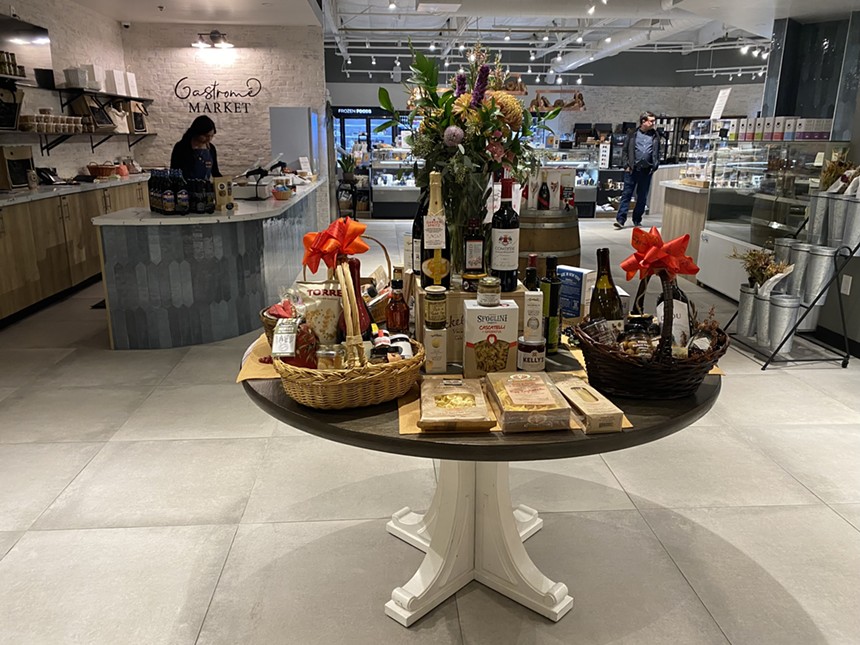 Gastromé Market has a well-curated collection of gourmet goodies.
Geri Koeppel
And why not make an afternoon of it and grab a bite and a drink while you’re there? In October, the market opened its adjacent dining room, The Restaurant — a simple name befitting its understated elegance. The cozy space is chill and well-lit. Six faux marble tables are flanked by comfortable gray velveteen chairs, and an L-shaped bar serves eight stools. One wall functions as a glass wine display with pricier bottles. The regular list is thoughtful and well-selected, with wines from a variety of regions and nothing over $90 a bottle.

The exceptional cocktails, though, are where the bar really shines. All 14 drinks on the list ($16 each) offer a savvy spin on the classics.

The Woodshed Blues is a more evolved version of an Old Fashioned.
Geri Koeppel
A standout is the Woodshed Blues, a version of an Old Fashioned made with five-year rum, Italian amaro, Amontillado sherry, and brown sugar as well as bourbon and bitters. This cotillion of dark decadence was not too sweet, not too sharp, with a complexity offering glimpses of each of component while presenting a perfectly choreographed whole.

Also notable is the Divina Costiera, an ideal aperitif that the server described as “a lemon drop with a Ph.D.” It was a deftly balanced delight of not overly piney gin, Italian mandarin honeysuckle, lemon, amber honey, and bitters. It had a whiff of lemony sweetness and the slightest tinge of acidity, but nothing cloying or puckery.

The dinner menu is concise, with three pasta plates and four entrees, including an 18-ounce Terra Farm Wagyu Ribeye Bistecca for $125. Nine appetizers, including a salumi and formaggi chef's board ($28) made with wares from the market, are a tip-off that sharing is the right move.

Baked Camembert is served with date and spiced chile jam, local honey, and pistachios.
Geri Koeppel
The appetizer of gooey, rich baked Camembert ($16) is the best of the bunch. The sweet and spicy combo of date-and-spiced-chile jam topped with a drizzle of local honey set off the creaminess of the cheese. Crushed pistachios added a pleasant crunch, and focaccia biscotti were hearty enough to hold substantial scoops of cheese.

The autumn squash Bolognese ($24) was wildly mischaracterized, marred by a mediocre aqcua pazza, a tomato-based sauce typically used in seafood dishes, instead of the typical rich tomato, onion, and carrot base of a Bolognese. Meanwhile, the gently charred zucchini and squash, trumpet mushrooms, basil, and paper-thin wedges of Grana Padano added wisps of fall flavor, although more texture would be a welcome contrast to the mushy sauce.

Autumn Squash Bolognese is made with gently charred squash and zucchini, trumpet mushrooms, basil, and Grana Padano.
Geri Koeppel
The Two Wash Ranch half chicken ($40) wouldn’t have been a first choice, but the server sold it as his favorite, and it certainly was inventive, thanks to pichuberry mole — made with a sweet-tart “super fruit” native to the Andes — and charred shishito peppers.

The corn pudding accompaniment was dry, crumbly, and overly sweet, tasting more like a dessert, and the chicken, which the server said was brined for two days, was a tad too salty.

The food didn’t hit quite the right notes all the time, but because it shares some ingredients with the market, the quality was impeccable. The menu advertises that the pastas are locally made by Sonoran Pasta Co., the seafood is sustainably sourced, and the meats are humanely raised.

Two Wash Ranch half chicken comes with pichuberry mole, shishito peppers, and corn pudding.
Geri Koeppel
The kitchen has potential and just needs a little guidance. The culinary team is in transition, so hopefully they'll get the kitchen firmly on the rails.

Chef Christopher Brugman of private chef business Season Your Soul Hospitality initially oversaw and developed the menu, but now Adam Sanchez has been hired. He's leading the team and overseeing the cheese and catering departments. He has an impressive resume working with legendary French chef Jacques Pépin — recipient of a James Beard Lifetime Achievement Award — and as a chef and cheesemonger for the most Michelin-starred chef in the nation, Thomas Keller at The French Laundry in Yountville, California.

Service, on the other hand, was extraordinary: Other than the rogue chicken recommendation, the server was a superhero. He was the epitome of professionalism, from his warm welcome to his patient, thorough explanations, and conscientious check-ins.

And he managed this while tending bar, serving six bar patrons, and juggling four tables that were seated within a few minutes of each other. His graciousness, efficiency, and hustle were award-worthy.

Gastromé Market is selling gift baskets for the holidays along with pre-orders for Thanksgiving dinner to go.
Gastromé Market
The Restaurant at Gastromé opens at 11 a.m. Tuesday through Sunday with a slightly different lunch menu that swaps out sandwiches in place of the entrees. It closes at the same time as the market: 8 p.m. Sunday and Tuesday through Thursday, and 9 p.m. Friday and Saturday. So it's not a place to dally over espresso martinis into the wee hours.

However, it is a superb venue for sharing bites before hitting the bars, a quiet date night, or a ladies-who-lunch outing while picking up party fixings, a special bottle of wine, gift baskets, or stocking stuffers for the gourmands on your holiday list.